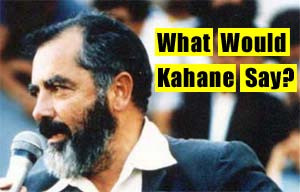 Last week I wrote a post entitled “Kahane was Right.” Apparently, the name “Kahane” has great power. One publication republished my article, and then tried to post it on its Facebook page, only to have it blocked [Editor: JewishPress.com was banned from publishing on Facebook for the rest of the day], presumably because saying anything positive about Rabbi Meir Kahane constitutes “racism.” Another editor felt that he could not in good conscience publish it – because of parts that were critical of Kahane!


Facebook’s action, whether an algorithmic response to the title or the decision of a human who probably didn’t bother to read past it, is not worth bothering about. But I would like to talk a bit more about Kahane and reactions to him.

Kahane is important because he is one of the few thinkers who have faced head-on the very uncomfortable (and yet undeniable) fact that – for cultural, religious, and political reasons that are unlikely to change – Jews cannot coexist with more than minimal numbers of Muslim Arabs in Eretz Yisrael.

Keep in mind that individual Jews and Arabs often work well together, and can treat each other with respect and even form friendships. I know this as a fact from personal experience. But events during the 70 years of Jewish sovereignty here – and the Jewish presence prior to that – have shown that the ideal of coexistence is chimerical.

A major problem, perhaps the ultimate source of all of the problems from the beginning, is that Islam does not countenance non-Muslim – especially Jewish – sovereignty in a place where Muslims live. Another issue, since 1948, is that the Arab narrative of dispossession, along with shame from repeated military defeats, evokes fury in the honor-based Arab culture. Finally, the Arab leadership, starting with Amin al-Husseini, has always tried to exacerbate these feelings. Yasser Arafat, especially, created an educational system that transformed Arab boys and girls into vicious killers as a political tool.

Thanks to leaders like Arafat as well as interference from external antisemitic powers – the KGB’s embrace of the PLO comes to mind – the situation has only gotten worse. A “Palestinian” culture, which did not exist before the 1960s has come into being which is essentially (and murderously) oppositional to the Jewish presence in Eretz Yisrael.

Meir Kahane, sadly, was assassinated before the disaster of Oslo, but in “They Must Go,” written while he was imprisoned in Israel in the 1970s, he exhaustively documents the Arab hostility to the Jewish presence in Eretz Yisrael back to long before the founding of the state.

The conflict will not be solved by well-meaning attempts at dialogue. If the political aspects of the conflict that have developed over the years weren’t enough to make it insoluble, the religious side would be more than enough.

If you combine this with the simple geostrategic fact (just look at a topographic map) that an Israel without military control of Judea and Samaria would be indefensible, you arrive at what Micah Goodman called “Catch 67,” the dilemma which seems to force us to choose between military and demographic insecurity.

It’s even worse than this, because the problem is not only with the Arabs of Judea and Samaria. The relationship between Israeli Jews and the close to 20% of its citizens within the Green Line who are Muslim Arabs is also tense. A recent poll shows that two-thirds of Arab citizens of Israel do not believe that Israel has the right to be defined as the national home of the Jewish people. Arab members of the Knesset display varying degrees of hostility to the Jewish state, all the way up to calling for “resistance” against it, which is understood to mean terrorism. I can’t think of another country with even a 10% proportion of Muslims in its population that doesn’t suffer from serious instability, terrorism or insurrection connected to Muslims.

Kahane argued that higher birthrates among Arabs than Jews would inevitably lead to a Muslim majority, which of course would be the end of Jewish sovereignty. But time has proven him wrong – at least in the pre-1967 area of Israel – as the Jewish birthrate has increased while that of Arabs declined; and Israel received a surprise bonus of almost a million former Soviet Jews. Nevertheless, the tipping point for political instability may be well below the numbers needed for a Muslim majority.

Kahane’s conclusion was that Jewish survival demanded the emigration of most of the Arabs from the area between the Jordan and the Mediterranean. And I believe that he was right about this. That doesn’t mean that they should be expelled violently (as the Jordanians did to the Jews in the areas they occupied in 1948, and as the Turks are doing right now to the Kurds in the areas of Syria that they have invaded). Perhaps voluntary, incentivized, emigration is possible (see Martin Sherman’s comments about Gaza here).

But I cannot agree with everything he believed.  For one, he wanted a state whose laws would be the laws of Halacha. I think, on the other hand, that observance of the commandments by Jews should be a personal matter, not one enforced by the state. The state of the Jewish people must respect Judaism, but it must also respect its Jews; and many of them are only partly observant or not at all.

The other difficulty I have is more philosophical. In his view there is something essentially different between Jews and non-Jews. Kahane sees the “chosen-ness” of the Jewish people as a concrete property that connects them to Hashem in a way that no other people can be connected:

There is only one reason why Jews should be different, and that is the very special difference, the uniqueness that makes them separate and different from all other peoples. ONLY the election of Israel, only the concept of a Chosen people, a kingdom of priests and a holy nation; only the “Ata b’chartanu, You have chosen us from all the nations”: only the “hamavdil beyn kodesh l’chol, He who differentiates between and separates between holy and profane, between Israel and the nations”; only the need to be different, apart and separate NOT BECAUSE OF SOME VAGUE LANGUAGE OR HISTORICAL DIFFERNCE [sic] but because of the distinct uniqueness of Torah and the commandments as a DIVINE decree – only this gives any validity to the Jew remaining alive as a distinct entity. – Meir Kahane, Letter to a secular Jewish nationalist, 1973

Although I go to synagogue every Shabbat, apparently I am a “secular Jewish nationalist.” I see the “election” as the imposition and acceptance of the burden of Hashem’s mitzvot, not a metaphysical property that places me higher in the chain of being than an Arab. Indeed, I admit that I find the idea repugnant.

I don’t insist that the Arab and Jewish cultures are equally good or valuable. But my problem with the Arabs isn’t metaphysical, it’s concrete, based on their behavior.

For Kahane, the only kind of Zionism that’s worth having is a strict religious Zionism, one that doesn’t see its task complete until the State of Israel is a Jewish kingdom modeled on an idealized ancient Judea. Of course, if you think about our history as described in the Tanach, you’ll realize that everything wasn’t ideal back then either. Kahane’s belief is analogous to that of the Islamists who believe that “Islam is the answer” to all the problems of Muslim societies. That didn’t work for them, and I don’t think a similar approach will work for us. Just read the Book of Kings.

While I believe that Kahane was correct in his analysis of the Jewish-Arab conflict, and agree with him that the only acceptable solution to it is the emigration of most Arabs from Eretz Yisrael, I also think it is necessary for our survival that Israel be at the same time a modern, democratic state and one that is based on Jewish principles (and I don’t mean the “Tikkunist” principles of liberal Judaism).

Do you see the tension there? Certainly there is one. And I see my personal job as trying to understand how it’s possible to have a Zionism that can be justified on wholly secular grounds without losing its spiritual truth.

When I think about the difficulties, though, I am reminded of a remark made by the very liberal (but very smart and knowledgeable) Rabbi Arthur Hertzberg, z”l. When someone asked him how he could both study biblical criticism and yet believe that every word of the Torah was given to Moshe at Sinai, he simply said that he was “a crazy Chosid who could hold several contradictory ideas in his head before breakfast.”

Maybe we all need to learn to do that. 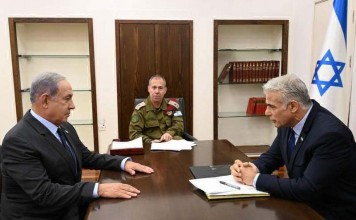 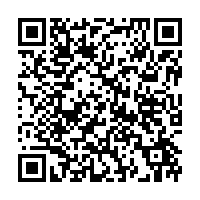