Here is my guess as to what Binyamin Netanyahu’s plans are for extending sovereignty over parts of Judea and Samaria.


I think it is the first stage of a disengagement plan.

There are a few facts that need to be understood to begin with:

1. The status quo has been remarkably good tactically, but is a disaster strategically. Israel has managed to minimize terror attacks through some brilliant tactical moves but they cannot last long term.  It has a corrosive effect on the soldiers who have to serve in the territories. No one is happy ruling another people. But abandoning Judea and Samaria would be bad for security and would give up lands that Jews feel a strong psychic attachment to. Keeping it all means ruling over a growing hostile population. Is the status quo sustainable over 100 years? The answer is no, and  Bibi is one of the few politicians who thinks how to best position Israel for the next century.

2. Israel has no peace partner, and won’t have one for the foreseeable future. A peace agreement with the Palestinians is simply inconceivable. Whatever Israel does for the long term must be unilateral and strategic.

3. Trump might lose in November. If Israel is going to do any dramatic moves to shake things up and enhance its strategic and geo-political position for the future, now is the only time to do it, while the US can deflect the outrage. The muted international response to the Golan announcement and the Jerusalem embassy move by the Trump administration shows how important it is to have the US on your side.

4. There has been a consensus in Israel for decades that the Jordan Valley must remain under Israeli control for the security of the country. Yitzhak Rabin was not willing to give it to a Palestinian entity. 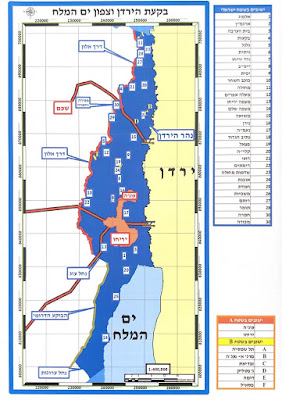 5. Netanyahu is on the record of supporting extending sovereignty to parts of Judea and Samaria – but he is also on the record against having Israel rule over a hostile Arab Palestinian population. If you look at his Jordan Valley map, Jericho is excluded (even as it is surrounded.)

6. Netanyahu gets votes and political power based on his hawkish statements, but he is far more attuned to Arab human rights than he is given credit for. Just almost no one reports it.

7. Bibi was almost certainly involved in the specifics of the Deal of the Century, which gives clues as to his thinking on how the future might look. But he has to do it in such a way that the Palestinians don’t have any veto power. More importantly, he has to do it in a way that can keep the Right in his coalition.

My guess is that Bibi is intending to draw a line, even if it is a very jagged line, of what would eventually be the permanent borders of Israel – and quietly withdraw from the Arab parts.

Because of the US election, he cannot consider doing this gradually. This is the one chance to redraw the map, so it must be taken advantage of.

The implication, however, is that everything outside the line is no longer in play, and no longer claimed by Israel.

That’s the part no one wants to talk about. But it may be the key to the whole thing.

If Israel says it formally has no interest in sovereignty over areas not slated to be included, which would include nearly all of the areas that Palestinians live, the demographic problem that everyone warns about is no longer an issue. It isn’t that Israel will recognize Palestine on the remaining lands – Israel will probably just ignore them as long as their leadership acts like speaking to Israel is toxic.

Let the Palestinians declare a state there. Let the world recognize it. It is no longer a big deal. Israel is washing its hands of control of problematic areas.

If I’m right, expect a major redeployment of IDF soldiers and border police away from weekly riot areas. Expect them to stop doing useless things like taking down Palestinian flags. This will reduce unnecessary friction. Even though Bibi has denied it, I think that Israel will offer citizenship to the relatively small numbers of Arabs that end up on the Israeli side of the line and who want it.

I would also guess that more bridges and tunnels will be built to keep the Palestinian territories contiguous, similar to the “Deal of the Century” plan.

This way, many of the real arguments against “occupation” become muted. No checkpoints, no soldiers, no tear gas, no demographic threat.

And, if I am right, this would make Israel’s Gulf Arab allies happier as well, because it starts ending the conflict instead of perpetuating it, which is what every peace plan ended up doing. I can even imagine the Gulf countries becoming Israel’s liaisons with the Palestinians, with some carrot and stick approaches – when the borders are quiet, offering things like help with buying Palestinian exports, or facilitating Israel allowing 5G internet to boost the Palestinian economy.

Of course the governments of the world won’t recognize what they would call annexation. Israel is used to that – it has dealt with the world insisting  the “occupation” is illegal for 53 years and not recognizing the Golan’s annexation. The additional pressure will subside, especially if the US supports it. And those who have the ability to look beyond the cult of Oslo will see that this plan does not preclude peace – in fact, it might even wake up the Palestinians to start negotiating before they become completely irrelevant.

For over 50 years, Israel and her friends have not had a good answer to critics complaining about “occupation.” This is because Israel has remained ambiguous about its own position on the territories. Extending sovereignty will end that ambiguity and strengthen Israel’s political and legal position.

This could address the legitimate problems of Israel today being in places it is not wanted, while ensuring security for her people.

There will always be people screaming about supposed Israeli crimes, but those people will never go away. They won’t be happy until Israel is destroyed, so their opinions mean nothing. Israel has the opportunity to act now in a way that can become a permanent solution without closing the doors to the tiny chance for a change in Palestinian leadership that can be a partner.

It is even possible that this idea is the unofficial contingency plan of the “Deal of the Century” – what happens after the Palestinians reject their last chance for peace. Even with what I am describing, they can become a state. This fits in with Bibi’s mindset and, largely, with the Kushner/Greenblatt plan.

Of course it is easy to poke holes in this plan and show why it is doomed. I could come up with dozens of things Palestinians and Europeans and UN and even far-right Israeli Jews would do to try to sabotage it.  But the question is, given the constraints, what is better?