Remember the murder of Dafna Meir, a Jewish nurse and a young mother of six children?


We wrote about it here [“18-Jan-16: Multiple Arab-on-Israeli attacks and a Jewish mother is murdered at her front door“]. We noted at the time that the BBC had managed to report that savage murder – by a youth who stabbed her to death at the door to her Otniel home in the presence of her children – without mentioning the word “terror” (or any variant of it) even once. A death. Maybe a crime. Perhaps an accident. Next.

Mrs Meir’s husband, at the urging of one of the Israeli terror victim groups, went to the United Nations along with his oldest daughter Ranana, aged 17, on April 19, 2016 to be present at a UN Security Council debate on the Middle East that was scheduled to touch on matters concerning the Arab/Israel conflict. (Background at Israel National News and Jerusalem Post.)

How well do you imagine that went? Our own quite negative experiences at the UN gave us reason to be deeply pessimistic when we read about the Meirs’ impending trip. It turned out to be traumatic and upsetting and they want people to know.

Natan Meir has just sent a brief open letter to the United Nations Secretary-General, Ban Ki-moon, reflecting on the quite shocking way he and his daughter and their message were treated and making some serious points about how diplomats view real, live, in-the-flesh terror victims when they occupy the same room. It’s searing.

Excerpts from the letter which he has now published via Facebook:

We hope Natan Meir and his family take the shattering reality of their close encounter with the very, very ordinary men and women who populate the world’s most important international organization and turn it into additional inspiration to keep speaking out in the name of their loss and their prayers for a better future. What they have to say is far more meaningful than the delegates’ speeches and studied indifference.

Sitting back and waiting for a political or diplomatic process to bring something constructive and sustainable to our side or for that matter to the Arabs is, it has to be said, not only a waste of time but, as we have seen ourselves, deeply humiliating and harmful to the human spirit. This, emphatically, is not how things should be.

We plan to come back to this issue later in the week. 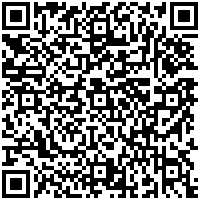