There are two kinds of people who hate strong Jews: your run-of-the-mill Jew haters (classical antisemites) and colonized Jews.


2000 years of living as unwelcome guests in other people’s lands have taken a toll on the Jewish People. Putting your head down, being quiet in the face of abuse and minimizing signs of Jewishness have become habits, so deeply ingrained that many fail to recognize their existence. Judaism upholds the sanctity of life and, because of this, actions taken by Jews to hide their Jewishness in order to survive were approved. Even religious traditions were changed in order to adapt to the realities of living in places where it was not necessarily a good idea to be “too Jewish” – for example, lighting and placing the Hanukah candles inside the home rather than in a public place where everyone passing by can see. 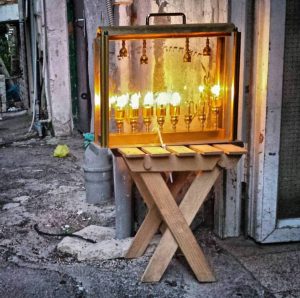 The re-establishment of the Jewish State led to a new alignment of powers. Now the classical anti-Semites can direct their Jew-hatred at the Jewish State rather than their Jewish neighbors. The oldest hatred has been reborn with modern branding: “I don’t hate Jews, I just hate Israel.” Or, an even more sophisticated version: “I don’t hate Jews or Israelis, I just hate the Israeli government.”

For colonized Jews the statements are different. The fact that these are said by Jews and seem more “nuanced” makes them harder for most people to address: “I love Israel, that’s why I hate the policies of the Israeli government.” Or “Why does Israel have to make waves and cause problems? Why was it necessary to move the embassy to Jerusalem? Pass the Nation-State Law? Those things were obvious and just upset people.”

Colonized Jews hate being told that they are colonized. The idea that the culture of the land in which they live dominated and swallowed up their Jewish identity is repugnant. Historically Jews have preferred to believe that are happily integrated and welcome in the society in which they live (“I’m not Jewish, I’m a German of the Mosiac faith”). Historically it has been non-Jewish neighbors who taught Jews otherwise.

Colonization is a harsh definition, it is more common to hear the softer terminology: “diaspora mentality” which means having the mentality of a scattered people, living at the mercy of others. In other words, this is the mentality of people who are not sovereign and lack the power to determine their own fate.

It is important to note that while Jews who live in the diaspora are more likely to have a diaspora mentality, there are plenty of Israelis with the same mindset.

This terminology enrages those who it most aptly describes.

I believe this rage comes from fear because it leads to the necessity of making a terrifying choice: become a proud, public Jew and risk being ostracized and any hate or violence that could ensue or allow your identity to become completely erased.

It is hard to be hated, pushed aside and seen as “the other.” Over the centuries many Jews sought to appease the haters by abandoning their Jewishness. Although it is not something that is discussed I believe, somewhere deep down, it is understood that those who chose the “easy route” eventually disappeared while appeasement does not actually diffuse hate – in fact, it increases animosity and disrespect of those willing to abase themselves in this way.

Israel just re-elected Prime Mister Benjamin Netanyahu, for his fifth term. How could one man be so hated and yet so loved?

In my opinion, this seemingly paradoxical situation is a result of both supporters and haters seeing him in the same way – only one likes what he represents and the other does not. Netanyahu is the embodiment of a strong and unapologetic Jewish State, something that is repugnant to Jew haters and scary for colonized Jews, afraid of having attention drawn to their Jewishness.

It doesn’t matter if it’s Linda Sarsour, Robert Francis O’Rourke (“Beto”), any of the American Jewish organizations or rival Israeli politicians who denounce Netanyahu as “racist” and “not representative of the true will of the Israeli people.”

Democrat Beto O’Rourke on Sunday: “I don’t think that Benjamin Netanyahu represents the true will of the Israeli people or the best interest of the U.S.-Israel relationship” pic.twitter.com/JTiRu8k6eS

The Israeli people elected Netanyahu over and over and accusing him of evil qualities, is by extension, an accusation of all his voters. Over and over Jew haters and “progressive” Jews alike ignore the fact that it is the Israeli people who chose this man to represent the Jewish State. To them this is incomprehensible, he must have “stolen” the elections, tricked the public somehow… Israelis must be racist or just stupid…

In Israel, we are told of the widening divide between us and diaspora Jews. Usually, this is said in an accusatory fashion, as if somehow we are to blame.

Jews of diaspora mentality, Americans and many Israelis, were horrified when Netanyahu publically denounced the policies of the Obama administration, particularly his speech against the Iran deal in the US Congress. They insisted it would be safer for Israel to bow down, go along to get along.

Jews of diaspora mentality were horrified when Netanyahu enraged the French following the 2015 terror attack in the Hyperkascher by telling the Jews of France that he represents them too and Israel is waiting for them with open arms.

Jews of diaspora mentality (including some of my own relatives) were terrified of “triggering” violence by moving the US embassy to Jerusalem.

On the other hand, strong Jews who have shed the shackles of colonization are frustrated that Netanyahu has not implemented bolder policies.

It should be obvious, not something that takes exceptional courage, to implement Israeli sovereignty on all of Israel and equally apply the law to all of her citizens. It should be obvious, not a political calculation of “how much we can upset the world” that attacks on Israeli civilians are utterly unacceptable and must be squashed with swift and inescapable might. Jews should be able to pray freely in the holiest place to the Jewish People which happens to be located in the heart of the capital of the Jewish State. Isn’t that obvious?

A sovereign nation owes no explanations to foreign “masters” or patrons.

Passover is the holiday of Jewish freedom, the historical moment when the world learned that slaves do not have to remain slaves forever. Israel’s national anthem speaks of the “2000-year-old hope to be a free nation, in our own land.” The hope still remains because we are not yet completely free.

Usually, when we speak of not yet being free, we refer to the need to fight our would-be killers. I say that freedom of the Jews will come when our Jewish brothers and sisters shake off their fear of being who we are. The divide of the diaspora is not an issue of Israeli policies, it is a lack of acceptance of Jewish freedom and sovereignty.

It is the shackles of the mind that are truly preventing freedom. No matter what Jews of diaspora mentality (or the world powers) say, we will not willingly join them in their bondage but our hands are outstretched to pull them into freedom.

“Next year in Jerusalem, rebuilt!” is the end of the Passover Haggadah because THAT is the true end of the journey from slavery to freedom.