For someone of my age who grew up in the United States, the idea that a Jew is now considered a “frontrunner” of sorts to be President of the United States is rather amazing. But as an Israeli for almost half a century, I look at it with different eyes.

Friends and family of mine in the states who feel about the issues, the “situation,” in Israel as I do, don’t vote Democrat. And I strongly doubt that they’d change their minds to try to put a Jew in the White House. Intelligent and idealistic people vote policy not “color,” religion or “pride.” The novelty of having a Jew as President of the United States is not enough of a reason to have an extreme Leftist who repeats the same anti-Israel mantras as Obama and the United Nations.


In all honesty, even though your typical assimilated America-first Jew will finally feel fully accepted and relieved to finally have a Jew holding top office, my priority is how he relates to the State of Israel and its very complicated simple* security issues.

Sanders own campaign site makes it clear that “evenhandedness” is a good way to describe his policies vis a vis Israel and the so-called Palestinians, sic.

Jewish Heritage: Bernie is Jewish, but he does not favor Israel over the Palestinians, nor does he otherwise let his religion influence his positions regarding the conflict.
Two-State Solution: Bernie believes that Israel and the Palestinians can, and should, peacefully co-exist, and that Palestinians should have a country of their own.
On Netanyahu & Iran: Bernie is not a big supporter of Israeli prime minister Benjamin Netanyahu, and believes that diplomacy, not military action or economic sanctions, can keep Israel safe from Iran.

Many presidential wannabes convincingly mouth pro-Israel platitudes while running for office, but we haven’t yet seen anyone change the traditional pro-Arab and anti-Israel policies emanating from the State Department.

And we must not forget that although Sanders doesn’t deny being a Jew, his wife isn’t and neither are their children. It’s davka Donald Trump who has Jewish grandchildren…

*I changed the adjective to simple, because in all honesty, anyone who listens with even half an ear to what our Arab enemies unabashedly say know perfectly well that they are out to destroy us, and they have the support, financial and diplomatic of most of the world, especially the United Nations and the European Union. 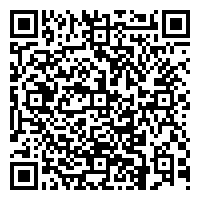