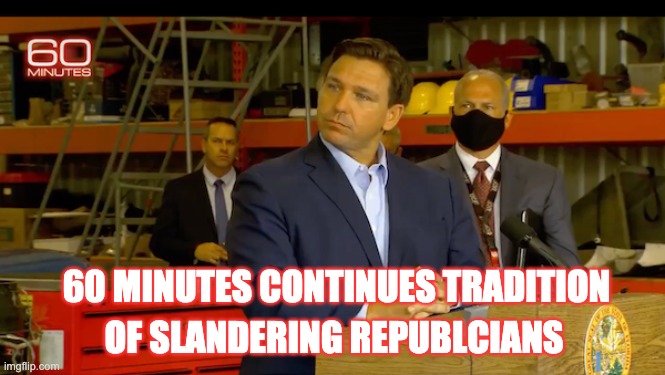 It’s clear that Democrats and their lapdog media besties are worried about Florida’s Governor Ron DeSantis because many believe that if Donald Trump doesn’t run in 2024, he would be the ideal candidate to run for POTUS and unite the GOP.  Liberal CBS News wants to kill any potential candidacy. The latest 60 minutes smear job is pretty low, even the network that tried to kill Bush #43’s campaign with Rathergate.


60 Minutes, the hard-hitting, deep-diving, leftist leaning, investigative program on CBS News, just aired a blatant hit-piece on Florida’s rising Republican superstar, Governor Ron DeSantis. While ignoring the New York Governor’s pandemic bungle that cost thousands of lives, the Michigan Governor’s stomping down on civil liberties, and the blatant hypocrisy of the Governor of California living it up maskless at a Michelin-star rated restaurant while imposing lockdowns on the “little people,” 60 Minutes decided to shame Governor DeSantis for prioritizing seniors in his state for the vaccine roll-out. In what was clearly a smear job,  How the wealthy cut the line during Florida’s frenzied vaccine rollout, the news magazine show deceptively edited a video of the Governor’s exchange with 60 Minutes correspondent, Sharyn Alfonsi where she was asking about vaccine distribution after Publix, the largest grocery store chain in Florida, donated $100,000 to the DeSantis campaign.

Publix is the state’s largest private company and employs more than 100,000 Floridians, and has 831 locations across the state.

What 60 Minutes didn’t disclose was something that those who don’t follow Florida politics closely wouldn’t know — Publix was criticized in 2018 for their massive $670,000 in donations to DeSantis’s primary challenger, Adam Putnam. Admittedly, Publix donates more to Republicans, but according to OpenSecrets.org, 37% of the Publix Super Market PAC donations went to Democrats in 2019-2020. If you look at the overall spending, their political spending is only a shade more for Republicans at 53.85% versus Democrats at 46.15%.

But, 60 Minutes had to find a way to smear DeSantis to diminish any potential candidacy.  They chose to do it by leaving out key sections of his response to Alfonsi, making him look like the outlets selected to give out COVID shots because of some pay-for-play agreement and put seniors first in line for vaccines for political reasons.

The CBS News program is facing intense backlash for deceptively editing an exchange DeSantis had with “60 Minutes” correspondent Sharyn Alfonsi, regarding a narrative she pushed alleging the grocery store chain Publix was rewarded with vaccine distribution rights after contributing $100,000 to his campaign. However, the report also appeared to condemn his decision to vaccinate the elderly in his state over younger frontline workers. Alfonsi went even further by casting doubt on DeSantis’ reasoning behind that decision, which was that seniors were the most vulnerable to the virus.

I am not a physician, nor have I ever played one on TV, but anyone who is not an imbecile and has followed the news in the past year knows seniors are the most vulnerable to getting and dying from Coronavirus.

Here’s the video that 60 Minutes aired:

And the full transcript of DeSantis’s response. The bolded portions are the parts 60 Minutes cut:

RON DESANTIS: So, first of all, that — what you’re saying is wrong. That’s—

ALFONSI: How is that not pay-to-play?

DESANTIS: —that, that’s a fake narrative. So, first of all, when we did, the first pharmacies that had it were CVS and Walgreens. And they had a long-term care mission. So they were going to the long-term care facilities. They got the vaccine in the middle of December, they started going to the long-term care facilities the third week of December to do LTCs. So that was their mission. That was very important. And we trusted them to do that. As we got into January, we wanted to expand the distribution points. So, yes, you had the counties, you had some drive-through sites, you had hospitals that were doing a lot, but we wanted to get it into communities more. So we reached out to other retail pharmacies — Publix, Walmart — obviously CVS and Walgreens had to finish that mission. And we said we’re going to use you as soon as you’re done with that. For Publix, they were the first one to raise their hand, say they were ready to go. And you know what, we did it on a trial basis. I had three counties. I actually showed up that weekend and talked to seniors across four different Publix. How was the experience? Is this good? Should you think this is a way to go? And it was 100% positive. So we expanded it, and then folks liked it. And I can tell you if you look at a place like Palm Beach County, they were kind of struggling at first in terms of the senior numbers. I went, I met with the county mayor. I met with the administrator. I met with all the folks in Palm Beach County, and I said, “Here’s some of the options: we can do more drive-through sites, we can give more to hospitals, we can do the Publix, we can do this.” They calculated that 90% of their seniors live within a mile and a half of a Publix. And they said, “We think that would be the easiest thing for our residents.” So, we did that, and what ended up happening was, you had 65 Publix in Palm Beach. Palm Beach is one of the biggest counties, one of the most elderly counties, we’ve done almost 75% of the seniors in Palm Beach, and the reason is because you have the strong retail footprint. So our way has been multifaceted. It has worked. And we’re also now very much expanding CVS and Walgreens, now that they’ve completed the long-term care mission.

Here’s the full clip including the parts 60 Minutes cut, originally published by Forbes:

This pay-to-play suggestion is so stupid that Democratic Party State Representative and Director of the Florida Division of Emergency Management, Jared Moskowitz, calls it “absolute malarkey.” It wasn’t even DeSantis who first selected Publix.

Publix has also called the suggestion “absolutely false and offensive.”

“The irresponsible suggestion that there was a connection between campaign contributions made to Governor DeSantis and our willingness to join other pharmacies in support of the state’s vaccine distribution efforts is absolutely false and offensive. We are proud of our pharmacy associates for administering more than 1.5 million doses of vaccine to date and for joining other retailers in Alabama, Florida, Georgia, South Carolina, Tennessee and Virginia to do our part to help our communities emerge from the pandemic,” a Publix spokesperson told Fox News.

“I watched the 60 Minutes segment on Palm Beach County last night and feel compelled to issue this statement. The reporting was not just based on bad information – it was intentionally false. I know this because I offered to provide my insight into Palm Beach County’s vaccination efforts and 60 Minutes declined. They know that the Governor came to Palm Beach County and met with me and the County Administrator and we asked to expand the state’s partnership with Publix to Palm Beach County. We also discussed our own local plans to expand mass vaccinations centers throughout the county, which the Governor has been incredibly supportive. We asked and he delivered. They had that information, and they left it out because it kneecaps their narrative.

We have confronted this pandemic for over a year. Our residents, like all Americans, are tired. And the media is making it worse. They are hellbent on dividing us for cheap views and clicks. 60 Minutes should be ashamed. I thank the Governor for supporting the residents of Palm Beach County.

Because of his efforts, working in coordination with Palm Beach County officials, over 275,000 seniors in our county-which is over 75% of the total senior population- have been vaccinated. I am proud of how our county and state leadership have executed on this important mission, and the results speak for themselves.”

The corporate media has it in for DeSantis because so many Republicans want him to run in 2024. Buckle up, there will be many more of these hit-pieces by the Democrat Pravda in the next couple of years, hoping to destroy the DeSantis reputation via death by a thousand paper cuts. 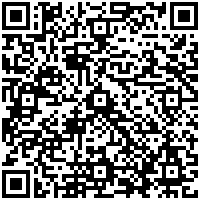