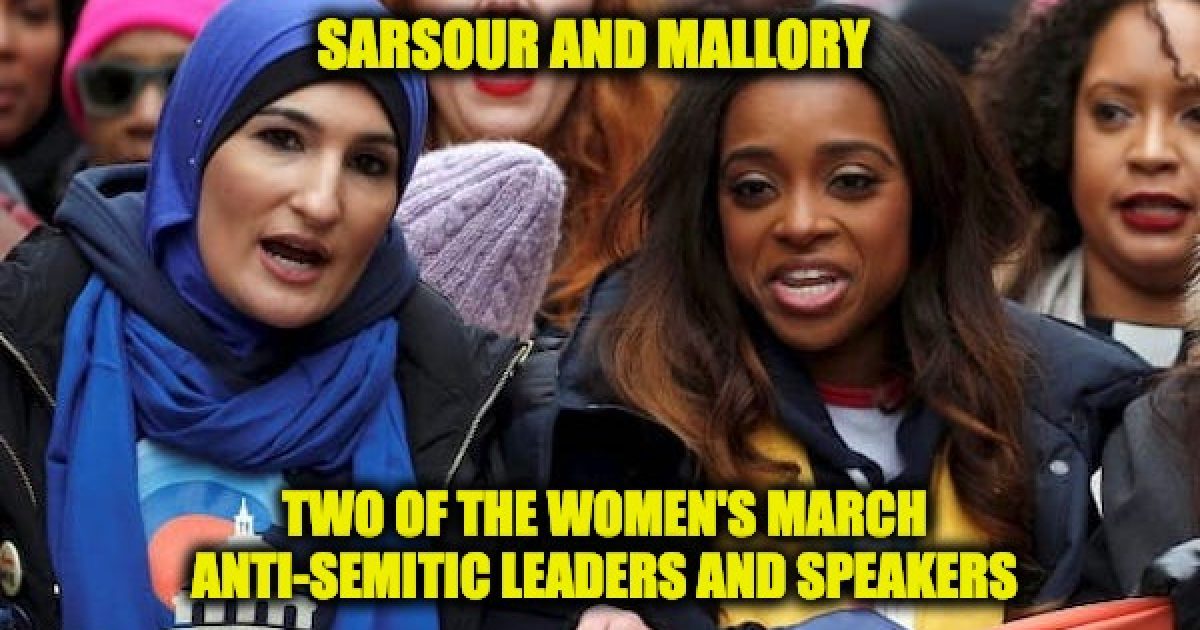 The late Supreme Court Justice Louis Brandeis once famously said, “Sunlight is said to be the best of disinfectants; electric light the most efficient policeman.” It took two years, but the Antisemitism built into the Women’s March is finally being exposed to sunlight.

Two months ago, one of the Women’s March founders Teresa Shook, publicly called for the co-chairs of the movement, Bob Bland, Tamika Mallory, Linda Sarsour, and Carmen Perez, to step down because of their hatred. She wrote on her Facebook page in part,

“In opposition to our Unity Principles, they have allowed anti-Semitism, anti-LBGTQIA sentiment and hateful, racist rhetoric to become a part of the platform by their refusal to separate themselves from groups that espouse these racist, hateful beliefs.”

After Ms. Shook’s statement, the mainstream media finally decided it was okay to join this reporter and unmask the Women’s March despite that it’s a liberal-run movement. The press began to expose the Antisemitism spewed by many of the Women’s March leaders to sunlight. Only a tiny part of those leaders’ Antisemitism comes from their idolization of Louis Farrakhan.

Once the Antisemitism of the March organizers was exposed nationally, the Chicago and New Orleans Women’s Marches scheduled with the rest of the country for Saturday, January 19th was canceled.

Last week began with Women’s March organizer Tamika Mallory making some national media appearance to promote the march.  She appeared on “The View,” and claimed she didn’t agree with Farrakhan’s anti-Semitic statements but refused to condemn them. This appearance led to the loss of sponsors for the protest. The NAACP, the Human Rights Campaign and most notably the Democratic National Committee which has its own issues of Antisemitism pulled out of their sponsorships.

Mallory went on to claim that Palestinians are native to the land since they have been there for a very long time, leading Hoover to ask “Do you feel that the Jewish people are native as well?”

Mallory answered by calling Judaism “ideology” saying, “I mean, I know, I understand the history, that, you know, that there are people who have a number of sort of ideologies around why the Jewish people feel this should be their land.” Going on to tell Hoover that it wouldn’t be fair of her to answer the question because she isn’t Jewish.  When Hoover pointed out that Mallory isn’t Palestinian but answered the same question regarding Palestinians, Mallory said she was done talking about that.

During the same interview, Mallory would not say that Israel has the right to exist.

One would think that the exposure of their Jew-hatred would force Women’s March leaders and speakers to keep their Antisemitism under wraps during this past Saturday’s national event. But one would be wrong. If anything, the Antisemitism has become more blatant.

On Saturday morning the March organizers released an agenda for the group which decried the anti-BDS bills, passed in 26 states, that prohibit government agencies from doing business with companies that boycott Israel. As reported in the Washington Times the agenda said in part:

“Whether it’s the attempts to create federal or state laws banning political boycotts or criticism of Israel (including the Boycott, Divestment, Sanctions tactic), targeting environmental protest or preventing students and faculty on college campuses from expressing their views or engaging in peaceable assembly, the silencing of one side of the debate is precisely what our First Amendment protects against.”

The BDS movement is anti-Semitic because it bases its attacks on fabricated tales of human rights violations, double standards, false comparisons to apartheid South Africa, and false accusations of “war crimes.” When you single out Israel for supposed “oppression” and ignore Iran, Saudi Arabia, Syria, Egypt, North Korea, Russia, etc. then it’s pretty clear what the motivation is.

Understand, this movement has just one purpose, to delegitimize Israel and to deny the Jewish people their right to self-determination. The founders and leaders of the BDS movement support a “one-state solution” that destroys Israel as the Jewish state.  Both the U.S. State Department and Pope Francis have declared that denying that the Jews have the right to have their own state, is a form of Antisemitism.

Many of the Women’s March Speakers on Saturday spoke in support of BDS.

For example, Linda Sarsour, March Co-Chair and friend of NY Sen. Gillibrand, gave the impression that the reports of the Women’s March Antisemitism were contrived by the media to protect President Trump. Per the Times of Israel Sarsour said;

Oh, come on, the media defending Trump? The Mainstream Media?

Sarsour went on to announce the Women’s March had called for defending “freedom of speech and the constitutional right to boycott, divestment, and sanctions in these United States of America.”

Speaking of Sarsour’s friend Senator Gillibrand, she says she rejects the organizers’ Antisemitism but spoke at a Women’s March event anyway. Conveniently the newly announced Presidential candidate spoke at the Iowa Women’s March rally. Kind of killing two birds with one stone, because the Iowa caucus next February will be the first votes of the 2020 race for the Democratic Party nomination for president.

Tamika Mallory, who less than a year ago gave a speech that included the anti-Semitic stance that the very creation of Israel was a human rights crime didn’t denounce her own Jew-hatred during Saturday’s March. Instead, she blamed it on the media.  “To my Jewish sisters, do not let anyone tell you who I am, I see all of you. No matter what they say, no matter what they write, I will not bend. My back is up straight, I will not bow, I will not break. I am who I am for over 20 years, and no media outlet and no one else will tell you, I’m telling you, I love all people and no one will define for me who I am. Only I can do that.”

Rabbi Nicole Guzik, A  Reform Rabbi from Los Angeles was promised that their local march would not be an anti-Israel hate fest. When the promise was broken, she wrote an open letter to the LA March Organizers published in the Los Angeles “Jewish Journal.”

(…) I was assured by you, the founders of this March, countlessly in a private meeting, that this March was different. That in Los Angeles (unlike the National March) Israel would not be attacked, labeling Israel as an apartheid state would be unwelcome on the stage and if a speaker went off script, the managers of the program would raise the music. In the very first hour of the Women’s March L.A. program at Pershing Square, all those promises were broken.

Marwa Rifahie, representing the Council on American-Islamic Relations used her allotted time to focus on the Palestinian agenda, a conversation that I was told would not be a focus. I waited. When she called Israel an apartheid state…I waited. Where was the music? Where was someone asking her to remain on script? (…) I used my voice, opinion and reputation to defend you, the founders that assured me, a Jewish woman was welcome and needed. I know I’m needed but today, I was not welcomed.

(…) I pray, next year, teshuvah, great repentance and change is taken to win back my trust. But today was not a day for all women, all people, all creeds and voices. When Israel is publicly attacked, my voice is silenced. I will not be silenced.

If you want to learn how to include me in ensuring hate against Israel isn’t on next year’s agenda, I’m all ears. Until then, this March is over.

The leaders of the March will explain that despite their support of the Antisemitic BDS movement they don’t hate Jews in fact, they’ve added three Jews to their steering committee. But as the legendary feminist leader, Dr. Phylliss Chesler explains in Israel National News:

One trans-identified Jew and two Jews of color may be seen as politically correct but they do not necessarily represent more than a minority of Jews in America. They have mainly been chosen as window dressing and as proof of “intersectionality.”

Those who know anything about Israel know that nearly half the country is populated by Jews of color who fled the most profound persecution at the hands of Muslim mobs and governments in Arab, Asian, South Asian, and North African countries. The point: The March leadership only chose Jews who have either left Judaism and are trans men or are Jews of color whose politics are more concerned with racial justice, immigration, and prison reform, rather than with sexism in general or with sexism within Judaism. Jews of color are in the minority in the United States–but ironically, Jews of color are plentiful in Israel where the March leadership believes that everyone is a white Jew. [Note: Chesler’s article is an important one has been picked up  widely, including by Fox News. I strongly recommend you click her and read the entire peice.]

Not all speakers at Saturday’s Marches spoke about their anti-Israel positions, At the New York rally, Gloria Steinem a former leader of the feminist movement, whose father was Jewish, ignored Antisemitic history of the march. But when she talked about the organizations supporting the NY Women’s March, the “Jewish” organization she obliviously named was The Jewish Voice for Peace itself an anti-Semitic organization. Per the ADL

JVP rejects the view that the Israeli-Palestinian conflict is a tragic dispute over land which has been perpetuated by a cycle of violence, fear, and distrust on both sides, in favor of the belief that Israeli policies and actions are motivated by deeply rooted Jewish racial chauvinism and religious supremacism.

Isn’t that ironic?  Antisemitism is so ingrained in the Women’s March movement that the speakers promote anti-Semites even when they don’t seem to be trying. 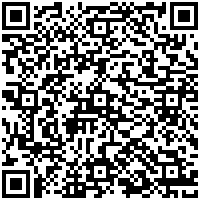