We invite you to view a slice of ordinary/extraordinary life in Israel in this video.

Be’er Sheva is an ancient/modern desert city that most people visit, if they ever go there, because of its first-rateuniversity (Ben Gurion) and its hospital, one of the busiest in Israel. But like many forgotten places in various parts of the world, it’s also home for a certain number of people, nearly 200,000 of them.

Now that Tel Aviv and Jerusalem and practically every other Israeli community in the southern half of Israel have experienced the blood-chilling sound of air-raid sirens in the past three days (and in some places, many repeats of the experience), it may be interesting for people living far from here to see and hear what it feels like from the ground.

We don’t know the exact number, but the residents of Be’er Sheva have experienced dozens of incoming missile warnings since Wednesday night. The one captured in this video involves multiple rockets flying in from Gaza. Through the magic of videography, they appear here as floating fairy lights in an ink-black sea of heavens above the ground-level festivities of an ordinary shopping center.

Then one after another in rapid succession they are extinguished. The reality of what is happening is much less poetic, but astonishing when you pause to think about it: an anti-missile technology that did not exist anywhere in the world is now knocking these terrorist flying bombs out of the sky as the ordinary folk who are the actual targets of an attempt to kill them in quantities watch from below and quietly applaud.

It’s larger than life. But it’s life. Our life, for now. 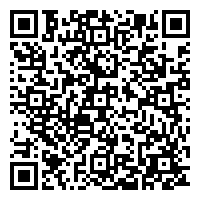