“It was on the next day that the Philistines came…and they found Saul and his sons lying on Mt Gilboa (1 Samuel 31:8)”

Today we are exploring an incredibly unique mountain that few non-residents of Israel will visit (or even notice) unless they are with a tour guide. This mountain, located between two, deep valleys (nearby Beit Shean is 120 meters (394 feet) below sea level) dramatically rises above the surrounding area to a maximum height of 650 meters (2133 feet) above sea level, giving tourists an unparalleled, panoramic view of much of Israel and Jordan.


The mountain boasts some of the most exciting hiking trails and picnic sites in the country! Extreme sports such as mountain biking and paragliding from the top of the summit are becoming increasingly popular.

While all of these unique features are reason enough to visit this stunning mountain, what really makes this place special are the incredible biblical events that took place here. In addition, arguably the most consequential battle in world history occurred here less than 800 years ago!

Gilboa is sandwiched between two fertile biblical valleys, the Jezreel Valley to its north and the Beit Shean valley to the east (for more on Beit Shean, click here). It was (and remains to this day) Israel’s breadbasket. What makes this area so fertile? A combination of frequent sunshine (it is one of Israel’s hottest regions, in 1943 a town in the Beit Shean valley recorded a temperature of 129 degrees). Also, the area is under sea-level, and there are abundant springs that emerge at the foot of nearby mountains, such as Gilboa. While Israel has historically struggled with water shortages, this area is an exception.

One spring emanating from Gilboa (Ein Harod) is also the location of one of the most exciting stories recorded in the Bible! During the times of the judges, the Midianites and the Amalekites had been oppressing the Jewish people for 7 years, severely impoverishing them.

The people cried out to G-d for salvation, who responded by sending an angel to Gideon who lived on Mount Gilead (for more on Mount Gilead, click here) requesting that he take charge and lead his people. Gideon was surprised that he was chosen, because although he was physically strong and pious, he was unknown and the youngest child from the poorest family of his Tribe of Manasseh (see Judges 6:15). When Gideon asked for a sign, G-d told him to offer a sacrifice on an altar which was then consumed by a fire from heaven. This indicated that he was indeed chosen for the job!

Gideon gathered 22,000 fighters to the spring, but G-d said that was too many and that he should send some home. Why would G-d tell Gideon to trim his forces, when intuitively the opposite should have happened? Because G-d wanted His people not to rely on their own strength but to rely on Him alone. When only 10,000 troops remained, G-d once again told him that was too much. G-d then asked Gideon to bring his troops to the Ein-Harod spring to drink, where he would conduct a water test. Whomever bent down on his knees to drink would be sent home (according to Jewish sources this was because those who kneeled did so because they were accustomed to bowing down to idols. Since this victory was going to be gained miraculously, a high level of spirituality was required). After the test only 300 remained, defeating the combined, massive force of Midianites and Amalekites, thus bringing 40 years of quiet to the Jewish people (for more on Gideon and a recent discovery of an inscription bearing his name, click here).

Gilboa is predominantly known for being the battleground between King Saul and the Philistines. In the battle, Saul and his sons were killed, which meant that David was now king. Rather than rejoice at his good fortune, he immediately tore his garments (a Jewish mourning custom) and mourned the death of Saul and his son Jonathan (who was King David’s best friend). Upset at what happened, David cursed the mountain, saying “O Mountains of Gilboa – let neither Dew nor rain be upon you, nor fields of bounty (2 Samuel 1:21).” According to Jewish sources, David was saying that even if the mountain were to produce some vegetation, it should never become edible enough to be harvested. Indeed, to this day the mountain is mostly barren, with the exception of non-edible trees planted by the Jewish National Fund on one side of the mountain (the other side is dramatically empty) together with beautiful flowers which came from nearby old Arab cemeteries (over the centuries, the flower seeds naturally found their way onto the mountain and sprouted). This is despite that fact that the mountain is sandwiched between the most fertile parts of Israel. Because of King David’s curse, the mountain is an island of infertility (though still incredibly beautiful) in the midst of plenty!

Many millennia later (circa 1260 CE) arguably the most important and consequential battle in world history took place here; the battle of Ein Jalut. At that time, the Mongolian Empire was the largest continuous territory the world had ever seen (in fact, that record has never been broken)!

The Mongolians had never lost a major battle at any time. When they overtook Syria, they sent messengers to the Muslim rulers of Egypt (which controlled Israel) demanding their surrender. The rulers in Cairo not only refused to surrender, but also declared war by killing the messengers (displaying their heads for all to see). The angry Mongols then invaded Israel (enroute to Egypt) to wipe out this “brazen” Kingdom. The two Kingdoms met on the battlefield by Mount Gilboa and for the first time in history, the Mongolians were defeated to the extent that Egypt and Israel were forever outside of their grasp (though the still-powerful Mongolians continued to expand rapidly in other directions).

Tourists in Israel will not be disappointed with a visit to Mount Gilboa. The region has much to offer, including stunning views, pastoral quiet, incredible hiking, biblical history and ancient remains! On your next trip to Israel, I highly recommend biblical Mount Gilboa be included on your itinerary! 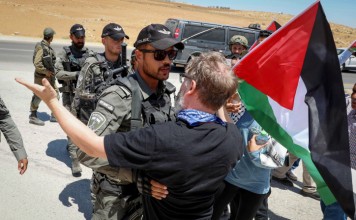