Fueled by wire stories from AP and AFP, the mainstream media have been running with a headline that Pope Francis, during a meeting at the Vatican on Saturday 16 May, called Palestinian Authority leader Mahmoud Abbas “an angel of peace.”


[Editor’s note: Unlike the news wires, JewishPress.com accurately reported the translation of the Pope’s statement to Abbas (as well as the Pope’s decision to recognize a “Palestinian” state).]

The problem: the pope did not call Abbas — aka the terrorist Abu Mazen — an “angel of peace.”

Why did Francis say the words “angel of peace” at all?  Because he was making a gift to Abbas of a medallion engraved with an image of the Angel of Peace.  The Vatican Insider feature of Italy’s La Stampa has this summary in its English version:

As is tradition with heads of State or of government, Francis presented presented a gift to the Palestinian leader, commenting: “May the angel of peace destroy the evil spirit of war. I thought of you: may you be an angel of peace.” Pope Francis had called Abu Mazen a “man of peace” when he visited Bethlehem in May 2014, just as he called the then Israeli Prime Minister, Shimon Peres, a “man of peace” during his subsequent visit to Jerusalem.

For those who are interested in comparing the original Italian report at La Stampa, it’s here.  The same passage has more information about the gift of the medallion.

A more direct, exact translation is as follows:

Jorge Mario Bergoglio [i.e., the pope, but using his given name as the head of state of the Vatican] gave the Palestinian leader, as is his custom with heads of state and government, a medallion with the image of the Angel of Peace, commenting: “The angel of peace destroys the evil spirit of war. I thought of you*: that you might be an angel of peace.”  Pope Francis had called Abu Mazen a “man of peace” during the visit to Bethlehem in May 2014, just as he called former Israeli President Shimon Peres a “man of peace” at his next stop in Jerusalem.

To summarize, then: Pope Francis had previously commended both Abbas and Peres as “men of peace,” presumably intending papal encouragement for the pursuit of peace.  At the meeting with Abbas on Saturday, the pope gave Abbas a medallion with the image of the Angel of Peace, and commented that Abbas might be, or would have the chance to be, an angel of peace.  He did not say that Abbas is an angel of peace. 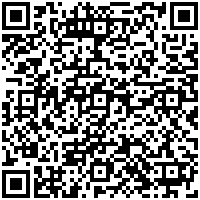