It can now be revealed – because Israel has announced it – that journalist Steven Sotloff, whose beheading by ISIS was posted on video this week, held Israeli as well as US. citizenship.

According to the JewishPress.com he first went to Israel in 2008 to pursue an undergraduate degree at the Interdisciplinary Center (IDC) in Herzliya.  His mother’s parents were Holocaust survivors.  He was in Israel in 2013 for a friend’s wedding, before he was kidnapped by Syrian jihadis in August 2013.


In his travels as a journalist in the Islamic world, Sotloff never referred to his Jewishness (or, presumably, to his Israeli citizenship).  Jerusalem Post reporter Oren Kessler told Times of Israel the following:

Sotloff, Kessler said, never shared his Jewish identity with anyone in the field, opting instead to tell locals that he had been raised Muslim but secular, without mosque affiliation. He sometimes even chose to tell people that he was of Chechen origin, and that Sotloff – a name that rings decidedly Jewish to those familiar with Jewish names – was actually a Chechen name. In Yemen, Kessler said, Sotloff once allowed locals to give him a “quickie conversion,” a 10-minute ceremony meant to return him to his purported Islamic roots.

It isn’t clear how long Israel has known about Sotloff’s abduction.  The U.S. has known since late 2013, but has avoided publicizing the case.  That was due in part, no doubt, to the likelihood that publicity would inevitably bring out facts about Sotloff’s Jewishness and ties to Israel on social media.  Most of the world – including many of Sotloff’s fellow journalists – learned that he was being held by ISIS on 19 August, when the video of James Foley’s beheading was released.

There is no predicting where all these things will go in the coming days.  The imaginations of many will swivel automatically to Israel’s history of deterrence measures against those who would attack her citizens.

Examples include Operation Wrath of God and Operation Spring of Youth, which targeted PLO and Black September leaders after the massacre of the Israeli Olympic team in 1972.  Another example is the IAF bombing of the PLO headquarters in Tunisia in 1985, after Israeli citizens were killed in the PLO hijacking of a yacht off the coast of Cyprus.
The abduction of Steven Sotloff is a somewhat different situation, given that he would have been traveling on a U.S. passport and was not kidnapped because he was Jewish or because he was an Israeli citizen.
That being said, Israel can afford only so much to be associated with the pusillanimity of the U.S. response to these jihadi beheadings.  America is no doubt courting attacks on our homeland with our continued feckless response, just as Israel would.  But from sheer size of territory and population, America can absorb more such attacks than Israel can.
There is no utility in trying to handicap what Israel may do.  The Israeli government has announced that Sotloff was one of its citizens – and it knows the kind of speculation and expectations that will raise.  ISIS, knowing now that it held an Israeli citizen, may act from a greater urgency about seeking and identifying such victims.
In general, we can imagine that the IDF will continue its pattern of taking out the operational capabilities of terrorist attackers, whether that means going after the leadership, the bases (e.g., Hamas in Gaza), or the major weapon systems (e.g., deliveries intended for Hezbollah or Hamas, interdicted in Syria or Sudan, or on the high seas).
We can also consider what Israel most needs to do about the proximate ISIS threat to Israel right now.  One requirement is interdicting high-value weapons that have fallen (or could fall) to ISIS in Syria.  Where such weapons could be used against Israel, Israel will want to take them out.
But another, related requirement has emerged just in the last few days.  The UN peacekeeping mission in the Golan – UNDOF, or the UN Disengagement Observer Force – has been irretrievably compromised by the attack of Syrian “rebels” on a crossing point guarded by UNDOF, and the seizure of a unit of Fijian peacekeeping troops.  (As of this writing, according to Fijian news sources, the Fijian troops are still being held by the Al-Qaeda-linked jihadis, and negotiations continue for their release.)
UNDOF has been in place for 40 years, but there is no prospect under current circumstances of the UN being able to simply resume it.  Nothing can be guaranteed about the observance of the disengagement agreement on the Syrian side.  The condition for the peacekeeping zone is gone.

This will inevitably mean that Israel has to take a more active role in securing the Golan.  That train has left the station; it is now only a matter of what is to be done – and what is to be done has everything to do with ISIS, and the fact that a hostile (or even just vulnerable) Golan is an invitation to guerrilla predation by the “Islamic State.”
How and where the Israelis enforce a deterrent posture of prompt, even game-changing retaliation will depend as much on the nation’s overall security needs as on the scope of each individual provocation.
But it will depend also on the tacit acquiescence of Israel’s stability-seeking neighbors, especially Egypt and Jordan.  Israel will be walking a fine line.
Keep in mind that there is no framework of American security guarantees bounding the problems of the Middle East now.  Nothing is a one-off anymore; nothing is a mere excursion from an overall state of peace or stability.  Civilization has collapsed in much of the Middle East, and the expectation of civilization is tottering on the brink.
For a flavor of what this is like to live in, we can cycle back to the days just before Steven Sotloff’s abduction in 2013, recounted in a fascinating piece by Ben Taub at the Daily Beast.  Taub writes about the Syrian “fixer” whose services Sotloff used to get into position for the story he was after.  The fixer’s identity had been compromised not long before by an unwary Canadian photographer, who posted the man’s name all over Facebook in the process of trying to make arrangements for himself in Syria.
In that earlier incident, Taub had learned – before the photographer and the fixer were to take off on their expedition – that the social-media revelations had already put a target on their backs with the jihadis near Aleppo, who were daily throwing up new “checkpoints.”  Taub quotes a journalist friend:

He’s [the Canadian photographer] under a [sic] big danger if he enters Syria, some of my contacts told me that some people are getting some informations [sic] about him, about his nationality, they know where he’s staying in Kilis, and they know that he’s supposed to come with X as a fixer tomorrow in Aleppo… tell him to be careful and that he’s under danger and people are monitoring him.

Taub was able to persuade the photographer not to go through with the trip.  But “X,” the fixer whose name had been splashed around Facebook, was the one who escorted Sotloff a short time later.
The story is worth reading just for the atmosphere it evokes, of unrelieved barbarism and peril: arbitrary checkpoints, armed brigands, kidnappings, the use of social media to hunt prey.  Far from being a mere artifact of civil war, this is the world the jihadis want to establish.  Using social media to hunt prey hasn’t been confined to Syria, for that matter: at least one well-organized instance of it was observed in France this summer, at the same time Muslim mobs were attacking French Jews in synagogues during Operation Protective Edge.
The world in which acts of barbarism are severable, in policy terms, from the nation-state’s project of protecting civilized life is crumbling around us.  There is no such thing as an inviolable condition of nationhood or civilized society.  And the acts of barbarism are attacks on them, unified on a continuum with more conventional military or political attacks.  Even where borders are not made to evaporate, hope and stability may be.
Retaliating for defense or deterrence against the ISIS slaying of Steven Sotloff would, in fact, be a national security measure for Israel, just as it would be for the United States.  Each of us will have an opinion on which nation is more likely, under her current leadership, to take meaningful action. 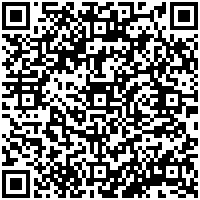