Faster than his company can issue a denial that no one believes for a moment (and that really is super-fast) following a whistleblower’s revelations and a slew of condemnations from governments, Facebook announced that it is changing its name to Meta.

Ah! Well in that case everything is just hunky dory then!

By now we will all be aware of what the revelations were and that they included lots of Facebook’s own research that their product is harmful to one in eight of its customers. The damage in part was caused by compulsive use of social media that damages their sleep, work, parenting or relationships.

A Facebook team dedicated to user well-being suggested a range of fixes, and the company implemented some, but shut down the team in late 2019.

Right-wing pundits see the whistleblower’s accusations as a Democrat Party plot given that the whistleblower is a donor to Alexandra Ocasio-Cortez and Bernie Sanders and she is advised by a former Obama deputy press secretary Bill Burton. Recalling Hilary Clinton’s veiled threat against Facebook following her defeat, they may have a point.

However, the evidence from this leak and many others provoke real concern among voters of both Left and Right.

This new name gambit is a standard P.R. tactic. It’s called deflection and for many seems to have worked.

With Facebook’s name change, the Latin phrase nomen est omen (“your name is your fate”) comes to mind.

Certainly, it caused hilarity among what the BBC snootily referred to as “Hebrew speakers” (they can’t bring themselves to say “Israelis’ you see). The word Meta in Hebrew means Death which might well prove an ominous portent and omen of Zuckerberg’s newest idea.

Professor Jean M. Twenge’s 2017 book on the damage done to children brought up with cell phones made headlines everywhere.

Twenge monitors societal change and found that teens who have grown up absorbed in their cell phones have rates of depression and suicide that have never been seen before. Growing up in virtual worlds, they are also profoundly disabled when it come to the real-life social interactions of the real one.

Zuckerberg sees the future as Meta…as in the “Metaverse!” The technology is not quite ready yet and Facebook is not the only one working towards the goal, but the ambition is to allow people to step into a super-realistic computer generated reality. By putting on your headset, you exist in a remarkably realistic alternative world and interact with computer generated avatars.

Want to go with your new “friends” to Mars? Yup! Eazy peazy! Want to fight in a war and get to kill people in a realistic way? No problem!

Star Trek fans will think of the Holo-deck on the “Starship Enterprise,” You would be better advised to think (and worry) about the dystopian horrors and imagery of Michael Crichton’s, “West World.”

Kid: “Sure Mom…let me just finish executing these prisoners I just captured with a sword, it won’t take long.”

And if you think that example is ridiculous and insane and Facebook/Meta will regulate what the Meta-verse will look like to protect kids, let me just sell you the Brooklyn Bridge.

You see, as I mentioned, name changes are nothing more than the application of cosmetics to cover something up. Nome est Omen actually suggests that your name defines your essential nature, it is the parallel to the Hebrew, “K’Shmo Kein Hu” “As his name is, so is he,” and in Facebook and Zuckerberg’s case, what “He is” and what he does, doesn’t seem to change at all.

Let’s test my claim, as this is a Jewish newspaper, by using Jews and invoking the old, “Canary in the Mine” model.

Firstly, the UK Parliament showed that Facebook refused to remove 90% of anti-Semitic posts even after they were brought to its attention. In a recent attempt to deflect criticism, (Facebook tolerate anti-Jewish racism…don’t make me laugh!) it established a system of “Independent” fact-checkers.

I wanted to see who these people were and how “Independent” they actually are. 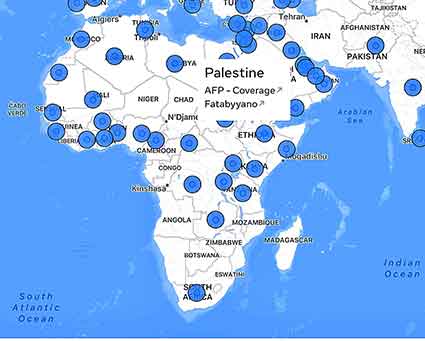 On Facebook’s website they show a map of the world where you can find them. I clicked on the four circles in and around Israel. You can see the result in the screenshot above. If you click on the circle over Israel, up pops, “Palestine.”

I was curious about this and wrote to Facebook explaining that I am a columnist for The Jewish Press and asked why, their Policy and Communications Manager for the Middle East and North Africa replied…

“We work with over 80 independent third-party fact-checkers around the world who are certified by the International Fact-Checking Network. These include AFP, Fatabyyano and Reuters for Arabic content and Reuters for Hebrew content. Our partner Fatabyyano is a Jordanian company covering the entire Middle East and North Africa region, including Jordan and Palestine (sic). We have a country office in Israel as well as an office in Dubai that covers the Middle East and North Africa region, including Palestine.”

Additionally: we adhere to the independent International Standards Organization definitions (ISO 3166) of countries/regions…We do not ‘recognize’ countries or adjudicate disputed borders, as we are not a government.”

You can judge for yourself whether by choosing to adhere to the ISO’s recognition of Palestine as a state, Facebook recognizes countries or not.

Sadly, Facebook’s relationship with Jews is defined by another Latin expression, Nihil Mutavit, nothing has changed.

So to go back to the canary in the mine metaphor, the world should keep its children as far away from Meta as it can, it is intent on exposing them to something much worse than it does as Facebook. Name change? Nihil Mutavit.