Governor Andrew Cuomo’s singling out parts of the Jewish community as being responsible for the current spike in coronavirus cases and his imposition of draconian restrictions on congregational worship within hours of Shemini Atzeres should not be forgotten come election time.

He went out of his way to unnecessarily put a Jewish face on the outbreak when a real leader would have striven mightily to avoid doing so. The Jewish community needed to respond and Agudath Israel, with Avi Schick as its lawyer, sued in Brooklyn federal court.


It was unfortunate that the judge was not really interested in Schick’s legal arguments, referring instead to the national judicial trend in similar cases to defer to the state. Thus, he said, “Generally courts throughout the country in response to Covid-related regulations imposed by states…have generally ruled in favor of the state.” He went on to say, “Courts may not second guess the wisdom and efficacy of public health measures and rational basis review will govern the analysis of the state’s restriction.”

So there was no chance this judge was going to be persuaded to overrule the judgment of the state. But that doesn’t mean there aren’t legitimate concerns the rest of us have with what the state decided. And interestingly, we may get some answers.

Though the judge refused to grant the requested restraining order preventing the state from enforcing the new regulations, the case is not over. That denial addressed only the issue of interim relief until the case could be decided on its merits. So if the state does not withdraw the regulations and Agudah decides not to drop the case, the case will continue, and our side will be able to get information through the legal discovery process.

How the state arrived at its decision to impose a 10-person limit per shul rather than rely on masks and distancing guidelines could be fair game. Why the decision was made to issue the regulations just before the Jewish holidays could also be. Same with the statistical calculations underlying the decision-making.

Was consideration given to the fact that Jewish neighborhoods appeared to spike in proportion to (some) other neighborhoods only because residents there took more tests? That’s another question that can be pursued.

We would also like to see if there is any record of how the governor came to the decision to publicly blame the Jews for a new outbreak.

His attacks on Jews and the new regulations are both shocking and outrageous. But it should not be forgotten that Mayor de Blasio also did his share to identify the Jews with the problem. Both seemed intent on bending the community to their wills. But we remind them that we Jews have seen this sort of thing before and we are still here.

On that note, on Thursday, October 15, #EndJewHatred is holding a protest from 4:30-6:00 p.m. at the main entrance of the New York Public Library in Manhattan (476 5th Avenue, New York, NY). We encourage readers to attend this protest and others like it. We echo the protest’s organizers in saying, “We demand that Governor Cuomo and Mayor de Blasio stop targeting the Jewish community.” 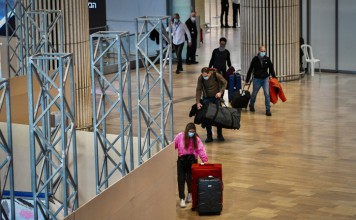