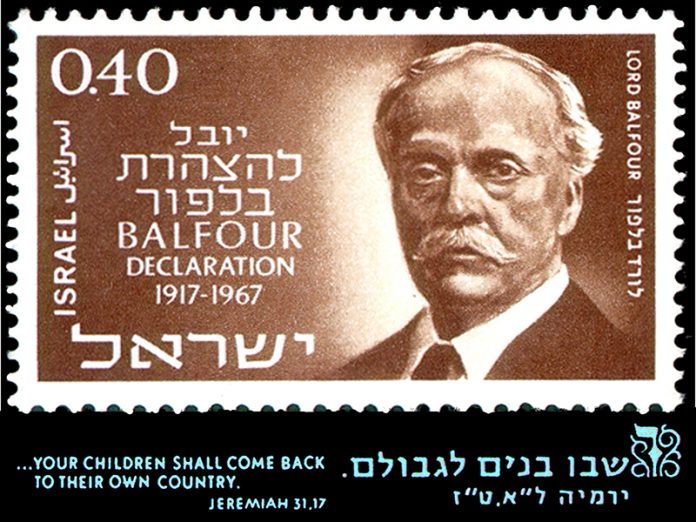 Thursday, November 2, marks the centenary of the issuance of the Balfour Declaration, pursuant to which Arthur James Balfour (1848 – 1930), in his capacity as British foreign secretary, wrote to Lord Walter Rothschild, president of the British Zionist Federation, the following famous and historic lines:

I have much pleasure in conveying to you, on behalf of His Majesty’s Government, the following declaration of sympathy with Jewish Zionist aspirations which has been submitted to, and approved by, the Cabinet.

“His Majesty’s Government view with favour the establishment in Palestine of a national home for the Jewish people, and will use their best endeavours to facilitate the achievement of this object, it being clearly understood that nothing shall be done which may prejudice the civil and religious rights of existing non-Jewish communities in Palestine, or the rights and political status enjoyed by Jews in any other country.”

I should be grateful if you would bring this declaration to the knowledge of the Zionist Federation. Many years ago, while conducting research at the British Library in London, I was privileged not only to see the original Declaration but also to make an official copy of it, which is shown here. I constantly strive in my Collecting Jewish History articles to share the thrill I experience when channeling the great men who live on through the ink and paper of their written words, and I trust readers will appreciate what an exhilarating moment it was for me to touch the living history represented by this uniquely important document.


The Balfour Declaration was important because it roused the Zionist movement into political and diplomatic action; ultimately formed the basis for the League of Nations’ Palestine Mandate; and, perhaps most important, lent legitimacy to Zionism on the world stage. Given Herzl’s failure to earn a commitment from the Ottoman Empire or any European government, the Declaration, despite its somewhat equivocal language, also constituted the first real step toward Zionism’s goal of establishing a home for the Jewish people in Eretz Yisrael secured under public law.

The Maccabean, an American Zionist newspaper, called it “the Jewish Magna Carta.” Rav Kook said, “I want to bless the British nation for having extended such honorable aid to the people of the Torah.” Abba Eban viewed it as “the decisive diplomatic victory of the Jewish people in modern history.”

And President Truman wrote in his Memoirs that he had carefully read the Balfour Declaration and familiarized himself with Jewish history. (See my Jewish Press column from July 7 of this year, “The Traveling Salesman Who Saved Israel,” which featured an original letter from Truman in which he declares that “I remain particularly gratified by the role I was fortunate to play in the birth of Israel as, in the immortal words of the Balfour Declaration, a national home for the Jewish people.”)

The critical importance of the Balfour Declaration to Jewish leaders may perhaps best be seen in a letter from Chaim Weizmann, whom many historians credit as the prime mover in influencing British leaders. (When the Israel Postal Authority marked the 50th anniversary of the Balfour Declaration in 1967, it issued a stamp with Balfour’s portrait – and another of Weizmann.)

In the October 10, 1949 correspondence shown here, Weizmann, as Israel’s first president, writes to Yosef Sprinzak, speaker of the Knesset, and recommends establishing the date of the Balfour Declaration as a national holiday for all time:

I have the most pleasant duty to propose to the Knesset that it should designate the day of the Balfour Declaration as a national holiday.

The important task that Lord Balfour fulfilled in consolidating the necessary instruments to realize our status as a nation – the essence of our national existence obligates us to remember and to commemorate those who were benevolent to us, and this should never be erased from our hearts. The British government’s motivation for issuing the Balfour Declaration is highly disputed. The essence of the theory promoted by anti-Zionists is that Britain’s intention was far from altruistic and that the Declaration proved to be one of the greatest international relations blunders of all time.

First, according to this thesis, Britain regarded the Declaration as establishing a lawful basis for a British protectorate over Palestine. In fact, when the Balfour Declaration was formally approved at the San Remo conference (April 1920), the delegates recommended the creation of the British Mandate, which was later ratified by the League of Nations in the San Remo treaty (1922).

Second, the British believed the Declaration would engender support for their war efforts from the millions of Russian Jews and from American Jewry.

The truth, however, is that – as one recent commentator cogently put it – the Balfour Declaration was not “a British imperial grab” but, rather, “the outcome of a carefully constructed consensus of the leading democracies of the day” and “one of the first instances of [effective and successful] public diplomacy.” In any case, there is no doubt Balfour himself genuinely supported the Jewish cause. Though his motivation is subject to conjecture, his interest began when Herzl negotiated with Joseph Chamberlain, the British colonial secretary, and Lord Landsowne, Britain’s foreign secretary, regarding Jewish settlement in Eretz Yisrael (1902 – 1903), and his interest in Zionism was revived through a meeting with Weizmann (1906). Balfour also spoke out against the persecution of the Jews – “the treatment of the [Jewish] race has been a disgrace to Christendom” – and saw the establishment of a Jewish state as a historic act of amends: “a great nation without a home is not right.”

At a rally at Albert Hall on Monday, July 12, 1920 – a public demonstration chaired by Lord Rothschild and attended by some 12,000 Jews – Balfour made it undisputedly clear that Eretz Yisrael was designated exclusively for the benefit of the Jewish people for the eventual establishment of an independent Jewish state. Declaring in his address that “we will make Palestine as Jewish as England is English,” he said:

So far as the Arabs are concerned – a great, and interesting, and an attractive race – I hope they will remember that while this assembly and all Jews that it represents through the world desire under the aegis of Great Britain to establish this home for the Jewish people, the Great Powers, and among all the Great Powers most especially Great Britain, has freed them, the Arab race, from the tyranny of their brutal conqueror, who had kept them under his heel for these many centuries…. and I hope that, remembering all that, they will not grudge that small niche – for it is no more geographically, whatever it may be historically – that small niche in what are now Arab territories being given to the people who for all these hundreds of years have been separated from it – but surely have a title to develop on their own lines in the land of their forefathers, which ought to appeal to the sympathy of the Arab people as it, I am convinced, appeals to the great mass of my own Christian fellow-countrymen. Shown here is the program issued by the English Zionist Federation for the Albert Hall rally, which contains a photo of Herzl with his famous line “And if you will it, it is no dream;” photos and quotes from Chaim Weizmann and Nahum Sokolow; a map of Eretz Yisrael “showing Jewish colonies;” and the “Hatikvah” (all four stanzas) in Hebrew and English.

That this Meeting, representing Anglo-Jewry, held at the Royal Albert Hall, on the 26th Tamuz, 5680 – 12th July, 1920 – expresses heartfelt joy at the decision of the Supreme Council to incorporate the Balfour Declaration in the Treaty of Peace with Turkey, and at the acceptance by Great Britain of the Mandate for Palestine as the Jewish National Home . . . and pledges the Jews of this country to spare no effort and no sacrifice for the rebuilding of Palestine as the Jewish National Home, in collaboration with the inhabitants of the country.

One of the proximate results of the Balfour Declaration was an influx of Jewish immigrants, primarily from Eastern Europe, which only served to exacerbate Arab opposition to the Declaration. In particular, Balfour’s visit to Eretz Yisrael in 1925 to attend the Hebrew University dedication ceremony, at which he delivered the opening address, aroused a storm of Arab protest. Balfour was, of course, enthusiastically welcomed by the Jews.

Shown here is a very rare invitation to the Wednesday, April 1, 1925 celebration of the opening of Hebrew University on Mount Scopus. Many cards and associated memorabilia were created to mark the enactment of the Balfour Declaration. Shown here is a beautiful example from my collection, a hand-decorated card made on the second anniversary of the Declaration, at the center of which is a Magen David and two Israeli flags, over which is written “A new light shall shine on Zion” and under which is written “in commemoration of the declaration of Minister Balfour given on November 2, 1917.”

In the frame are beautiful verses from Shir Hama’alot, the psalm recited after Shabbat and festival meals, regarding the return of the Jewish people to Eretz Yisrael.

Finally, for Torah-true Zionists, the legacy of the Balfour Declaration may perhaps be best expressed by Rav Yitzchak Meir Levin, a founder of the Agudat Yisrael movement in Poland who signed Israel’s Declaration of Independence and joined Ben-Gurion’s provisional government as minister of welfare. In the Rosh Chodesh Kislev 1932 correspondence (he also dates it by using the Daf Yomi page, 32 Rosh Hashanah), shown below, Rav Levin writes to the editorial board of Hahod in Jerusalem that although the issuance of the Balfour Declaration was clearly a gift from God, it will come to naught unless the Jews return to the Torah and to faith in Hashem: …author Mr. R. B. publicized in his lead article several matters that I said to him during a private conversation held at the Seashore Hotel…. I hereby undertake to correct and transmit these matters, all according to my recollection. I said to him, among other things: Absolutely, the Balfour Declaration was a hint from “the Supervision from on High” to remember our Holy Land, but it would seem that those involved in the building [of the land] did not understand this hint, [to wit:] to return with full repentance to the Torah and to the faith and to build the Holy Land upon these principles…. I stated this idea with these or similar words, and this idea I hold always, and at all times. 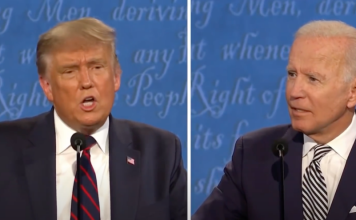