Nathan Lewin is perhaps the most famous frum lawyer in the country. A champion of many Orthodox causes, Lewin has argued 28 cases before the Supreme Court over his distinguished career and has taught law at Harvard and Columbia, among other places.

The Jewish Press: Please tell us about your background.

Lewin: My father, Rabbi Itzhak Levine, z”l, was the son of Rabbi Aaron Levine, who was the Reishe Rav in Rzeszow, Galizia and a great talmid chacham. He wrote sefarim and served in the Polish [parliament]. My father fled Poland [in 1939] and was very active in [rescue] efforts when he came to the U.S.

Was your father okay with you becoming a lawyer?

When I graduated from Yeshiva College, I got scholarships to Yale and Harvard, and I went to Harvard. My father accepted it – although he really hoped I would learn for semicha as well. I continued to learn but never got semicha.

The truth is that I give weekly classes in my shul here in Potomac [Maryland]. I’m a regular teacher of Daf Yomi on Sunday and Mondays.

Chanukah is coming up, and your fight for the right to display menorahs in public places is legendary. Tell us a little about it. Do you still get calls for help nowadays?

This year I’ve already had three requests, but cases that have to be taken to court are not as plentiful as those that can be resolved with letters or discussions with local communities.

Of course, we won the Pittsburgh menorah case in the Supreme Court [in 1989] – County of Allegheny v. ACLU – which has been a landmark case ever since in the question of displaying religious symbols on public property.

Have you ever lost any of these menorah cases?

Yes, we lost in Los Angeles in 1995 in the Court of Appeals of the Ninth Circuit. The American Jewish Congress opposed us – as they do in every menorah case – because they are opposed to having religious displays on public property.

How have things changed for the Sabbath observer in America since you tried getting your first job some 60 years ago.

I experienced substantial difficulties when I graduated in 1960. When [prospective employers] saw that I went to Yeshiva University for college, they would ask me whether I was shomer Shabbos. I would say, “Yes,” and they would say, “Well, we can’t possibly hire you because if we had to file something on a Friday afternoon or a Jewish holiday, you would be away. You should go get a dispensation from your rabbi.”

Did you go to interviews wearing a yarmulke?

I did not. I also did not wear a yarmulke in the courts because I thought that would prejudice my clients, and in those days wearing a yarmulke was not as common as it is today.

When I told my father, z”l, that I was not wearing a yarmulke in court or at Harvard Law School, he told me that my grandfather, the Reisher Rav, who had a beard, also did not wear a yarmulke when he was in the [Polish parliament] out of respect.

For many years you were a partner in the law firm of Miller, Cassidy, Larroca & Lewin. It seems some people were not happy your name was last.

Yes, they would say, “How come? You’re such a big macher. You teach in law schools and you argue cases in the Supreme Court.”

So I would reply, “You don’t understand. Most of my clients read from right to left!”

I understand you once participated in the only formal kosher dinner ever held at the Supreme Court. Can you talk about that?

Chabad’s Rabbi Nosson Gurary of Buffalo befriended Justice Scalia at Buffalo Law School and he came down to Washington to talk to him and other justices about starting an institute on Jewish law, which unfortunately never really got off the ground.

But with the understanding that it was going to begin, Justices Scalia and Ginsburg – and I think Breyer – agreed to be part of a kosher dinner in the Great Hall of the Supreme Court. I think it was the only truly kosher dinner ever held there, and I was asked to be the emcee.

It turned out that the Daf Yomi that day talked about the Sheva Mitzvos Bnei Noach [one of which is establishing] courts, so I distributed the sections of that daf and we even learned a piece of it.

Can you talk about Justice Scalia? Apparently you used to have lunch together on your birthdays.

Not on our birthdays, but he’d be my guest at lunch at the kosher restaurant in downtown Washington [every year] when the Supreme Court finished hearing oral arguments. That became the custom soon after he became a justice on the Supreme Court. He’d look for chopped liver on the menu. We had been classmates and friends at Harvard.

Was he a particularly impressive personality?

I thought so. One of the highlights of my class when I was teaching at Columbia Law School was going down to Washington to hear an argument in the Supreme Court and meeting Justice Scalia. When I told my class they’d meet him, they would sometimes hiss because they thought Scalia was an arch-conservative, a very grouchy guy.

But then they discovered he was extraordinarily friendly and warm and they all became fans whether they agreed with his opinions or not. He was very gracious.

The reason a Jew can wear a yarmulke in the army today is largely due to your efforts. Can you talk a bit about it?

An Air Force psychologist [in the early 1980s] refused to remove his yarmulke at work and they said they would court-martial him. So we brought a lawsuit claiming there was a constitutional right under the First Amendment to wear a yarmulke.

In the Supreme Court we lost 5 to 4, but there was a very strong dissenting opinion from Justice William Brennan. And at the end of his dissent, Brennan wrote that although the Court held there was no constitutional right, he hoped Congress would act.

So we went to Congress and the House passed a law, but the Senate did not. At that point, the United States was participating in a war in Grenada, and a Jewish chaplain – a Chabad fellow by the name of Jacob Goldstein – was there and made himself a yarmulke out of camouflage material.

When we heard about that, we decided to make copies of the yarmulke and distributed them in the Senate as proof that you could wear a yarmulke and be a loyal soldier fighting for the United States. After that, the Senate took another vote and the law passed.

I understand this story has an interesting postscript.

Yes, Justice Brennan [who was not Jewish] told me he received a sample of the yarmulke that had been sent around the Senate. He said, “I put the yarmulke on and forgot I was wearing it. I wore it the whole day in my office.

“At the end of the day, when I went down to the garage to drive home, I walked through my secretary’s office with my two law clerks standing there. They were surprised to see me wearing a yarmulke, but they were too embarrassed to ask me why. When I got home, my wife said to me, ‘Bill, what do you have on your head?’ It was the yarmulke. It was very comfortable.”

The Supreme Court recently got two new additions, Neil Gorsuch and Brett Kavanaugh. Are these additions good for the Jewish community?

The first is called Lemon v. Kurtzman, in which the Supreme Court held that the state cannot pay the salaries of secular teachers in religious schools. I have felt for some time that an answer to the economic problem of Jewish day schools in the United States is having yeshiva teachers of chemistry, math, and American history paid out of state funds.

Not only is it constitutional to make payments of this kind, it may be unconstitutional not to require it because otherwise I am being penalized for sending my child to a yeshiva.

Oregon v. Smith [in which the court said a law can prohibit an act required by a religion as long as the act was targeted without regard to its religious nature]. With Gorsuch and Kavanaugh, I think there are enough votes to overrule these two very bad decisions.

It would reinstate the constitutional right to have a religious exemption from laws that seem to be neutral on their face. A number of years ago, San Francisco planned to hold a referendum on banning circumcision. In a public session with Justice Scalia at Yeshiva University, I asked him whether under [Oregon v. Smith, for which he wrote the majority opinion], an Orthodox Jew would be able to have a bris in San Francisco if the population votes to ban circumcision?

He said no. The audience gasped, but he said that since the law applies to all circumcisions – both religious and non-religious – there would be no religious constitutional right to be exempt from that prohibition.

You work now alongside your daughter in a law firm that is aptly called Lewin & Lewin. What is it like?

Terrific. We have a very good working relationship. My daughter is not a big believer in litigation. She would like cases to be resolved by mediation. So she wants us to become mediators rather than litigators. I’m ready to do that at my age.

She has undertaken very ambitious efforts on behalf of the Jewish community. She is president of the Brandeis Center (nothing to do with Brandeis University), which fights anti-Semitism on campus and is very busy with that. So I’m very proud of her. We could use a few more paying clients, though. 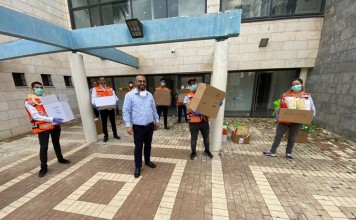