“For three years, attempts at negotiations between Israel and the Palestinian leadership have failed because of a lack of trust. It now seems highly unlikely that the two sides will return to negotiations,” wrote Ami Ayalon, a former commander of the Israeli Navy and head of the Israeli GSS, Orni Petruschka, an entrepreneur, and Gilead Sher, peace negotiator and chief of staff to Israel’s Prime Minister Ehud Barak, in Monday’s NY Times op-ed section, adding this hopeful note: “but that does not mean the status quo must be frozen in place.”

For starters, it’s gratifying to see three of the leading promoters of the two-state solution according to the Oslo accords accepting the reality of the failure of their program. Those men did not get where they are by deluding themselves, so that if they tell us there won’t be serious negotiations with the Palestinians in the foreseeable future, we should trust them.

But the turn these three are taking at this juncture, where everyone agrees Oslo is bust, is remarkable. It takes guts to state, as they do:

“Israel doesn’t need to wait for a final-status deal with the Palestinians. What it needs is a radically new unilateral approach: It should set the conditions for a territorial compromise based on the principle of two states for two peoples, which is essential for Israel’s future as both a Jewish and a democratic state.”

I believe it was the late Albert Einstein who said that Madness is doing the same thing twice and expecting different results. Indeed, every single time the prospects of two states for two peoples have been entertained seriously and officially, beginning with the 1936 Peel Commission, through the 1947 UN partition resolution, through the 1992 Oslo accords and then at the 2000 Barak-Arafat-Clinton Camp David summit, followed by the 2007 Annapolis conference, every single one of those attempts ended in rivers of blood.

It is a guaranteed, indisputable law of History, supported by thousands of dead bodies of Arabs and Jews: the mere senior-level discussion of a two state solution, never mind the enactment of it, is a recipe for war.

Yet these three gentlemen are tenacious in their insistence that “Israel can and must take constructive steps to advance the reality of two states based on the 1967 borders, with land swaps — regardless of whether Palestinian leaders have agreed to accept it.”

They remind me of the old Communists, back when those still survived in the wild, who, when challenged about the horrors of the Soviet Union, would answer that over there they’re not doing it right, but when we turn Communist it’ll be completely different.

But those three Israeli authors are men of deeds. They’re not just shouting slogans about peace and equality and about turning the other cheek. They write: “Through a series of unilateral actions, gradual but tangible changes could begin to transform the situation on the ground.”

“Israel should first declare that it is willing to return to negotiations anytime and that it has no claims of sovereignty on areas east of the existing security barrier. It should then end all settlement construction east of the security barrier and in Arab neighborhoods of Jerusalem. And it should create a plan to help 100,000 settlers who live east of the barrier to relocate within Israel’s recognized borders.”

Easy as pie, right? It’s like that Monty Python sketch in which John Cleese and Eric Idle explain how to rid the world of all known diseases. It’s simple: first of all become a doctor and discover a marvelous cure for something, and then, when the medical world really starts to take notice of you, you can jolly well tell them what to do and make sure they get everything right so there’ll never be diseases any more.

There certainly is a Pythonesque feeling to the entire article, as the three men attest that their plan “would allow settlers to prepare for the move and minimize economic disruption. Israel should also enact a voluntary evacuation, compensation and absorption law for settlers east of the fence, so that those who wish can begin relocating before there is an agreement with the Palestinians.”

And, like all things Pythonesque, the article is also terrifying. And like a Python sketch, it is also deeply autistic, written entirely without the perception of the humans it is setting out to “organize.” It also reminded me of the speeches of those pathetic Neturei Karta representatives to the Palestinian Authority, who have no roots at all within the society about which they’re passing judgment.

I could take the time and assign to the three authors a plethora of unkind motives, to explain why they would propose uprooting 100,000 Jews for the sake of an admittedly failed plan – but I’m sure the reader can do that part without my help.

What I wish to stress instead is just how very mad these three men, and the hundreds who support them, really are.

Have a happy and joyous and free Independence Day, and come to our barbecue if you’re in Netanya tomorrow around 4 o’clock. 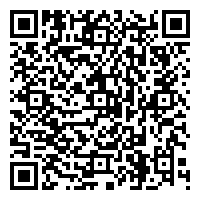