I was recently one of 22 foreign experts from around the globe who toured the city of Agdam in the war-torn Karabakh region in Azerbaijan. There, I witnessed the consequences of war firsthand and see how devastating landmines are for the civilian population. There, if one accidentally walked in the wrong area, one could be killed by an exploding landmine. Indeed, today, Agdam is a ghost town and the reconstruction process there is very slow, thanks to a large part to the widespread use of landmines in the area.

According to the International Committee of the Red Cross, mines are now proliferating so fast that there are perhaps as many as 110 million of them spread in 64 countries worldwide, and it is estimated that 2 to 5 million more mines are being laid each year. Scattered like deadly seeds, they kill and maim between 1,000 and 2,000 human beings every month, most of them innocent civilians.


At a conference at the prestigious Ada University, Vugar Suleymanov, the chairman of the Mine Action Agency of Azerbaijan, proclaimed: “Azerbaijan is one of the most landmine-contaminated countries in the world. Mines are indiscriminate. Since the end of the war, there have been 228 landmine incidents which injured 184 and killed 39. Armenia has released some of its landmine maps, but only 25% of the landmine data that we have is reliable. This causes indiscriminate suffering to civilians. Indiscriminate mines are the main impediment to the return of refugees to the area.”

At the conference at Ada University, Hikmet Aliyev, the special advisor to Azerbaijan’s President, stated: “The Armenians laid about one million mines in the Karabakh region. Daily, we have people killed and injured because of landmine incidents. This is a significant issue that slows down our post-conflict reconstruction process.”

An area can only be designated again for agricultural use and rebuilding one week after all the demining is completed. This is a major issue in Azerbaijan where one out of every seven Azerbaijanis is a displaced refugee. Over the last thirty years of conflict in the Karabakh region, more than 800 cultural and archeological sites, mosques, and churches were damaged and looted.

Chairman of the State Committee on the Work with the Diaspora Fuad Muradov noted in the conference how the conflict with Armenia and the use of landmines had completely destroyed the cities of Shusha and Agdam, as well as many other towns in the Karabakh region.

He added: “Our main goal is to build peace in this region. However, for that to happen, all landmines must be removed, and removing them is an uphill struggle when the maps you have are not reliable.”

Former Israeli Communication Minister Ayoob Kara discussed at the conference the use of Israeli robots to locate landmines, which Azerbaijan is already using.

Landmines should be banned worldwide because they are indiscriminate weapons that kill and maim innocent men, women, and children who accidentally step on them while walking in the street or playing. In some countries, one-third of landmine casualties are women and children, and many of them fall victim to landmines after the conflict in their countries had ended. In some areas of the world there are landmines left from World War II. It’s a travesty that must come to an end.

The Talmud says, “Whoever saves a life saves the entire world Mishnah Sanhedrin 4:5).” Demining conflict zones like the Karabakh region helps to sanctify human life and is a pivotal part of peace-building. For as long as there are landmines, making peace will be marred by the blood of innocents. 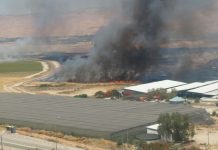