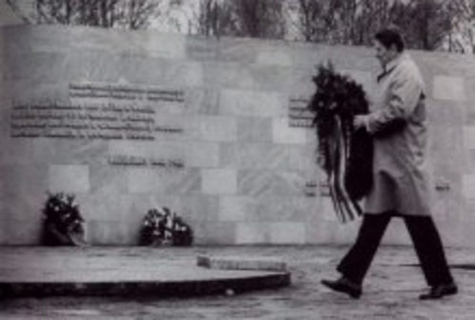 With so much attention having been lavished on last week’s 70th anniversary of VE Day, another anniversary, also connected to World War II, passed virtually unnoticed.

May 5 marked 30 years since President Ronald Reagan followed through on his hugely controversial decision to participate in a wreath-laying ceremony at the Kolmeshöhe military cemetery at Bitburg, Germany, which contained the graves of dozens of Waffen SS, Hitler’s killer elite.

For a president and an administration normally so attuned to the importance of image and perception, the incident constituted an unprecedented public relations stumble – Reagan biographer Lou Cannon called it “the seminal symbolic disaster” of Reagan’s presidency.

What makes the story even more baffling is that Reagan was widely seen as warmly disposed and well intentioned toward Jews and Israel. Few experiences touched him as deeply as did his viewing of Nazi death-camp newsreels. “From then on,” he said, “I was concerned for the Jewish people.”

And Reagan had an instinctive affinity for Israel. “I’ve believed many things in my life,” he stated in his memoirs, “but no conviction I’ve ever had has been stronger than my belief that the United States must ensure the survival of Israel.”

As an actor who spent decades in the heavily Jewish environment of Hollywood, and who counted scores of Jews among his friends and colleagues, he moved easily in pro-Israel circles. Both as a private citizen and as governor of California he was a familiar sight and a favored speaker at various functions for Israel.

Reagan credited his parents for his immunity to anti-Semitism. He often related the story of how his father, a traveling salesman, was about to check into a hotel in some remote area late one night when the desk clerk casually remarked, “I’m sure you’ll enjoy it here; we don’t allow any Jews.” Whereupon Jack Reagan grabbed his bag and walked out the door. He spent the cold night sleeping in his car.

It was shortly after Reagan’s smashing reelection victory in November 1984 that Chancellor Helmut Kohl invited the president to visit West Germany the following spring. Kohl suggested that, to mark the 40th anniversary of the end of World War II and as a symbol of the strong postwar relationship that had blossomed between the U.S. and the Federal Republic of Germany, the two leaders stop at a military cemetery where both American and German soldiers were buried.

Kohl also proposed that he and Reagan visit the site of the Dachau concentration camp. Reagan had no objection to either idea.

Within days, however, West German officials were quietly indicating to their American counterparts that they were having serious second thoughts about the Dachau visit. The White House at first refused to remove Dachau from the president’s itinerary, but the German entreaties grew more emphatic and Reagan, who at any rate was much more comfortable visiting inspiring and uplifting venues, decided he wouldn’t visit Dachau after all.

The back and forth between the U.S. and West Germany over the president’s forthcoming visit had been conducted behind the scenes in the early winter months of 1984-85. Reagan himself lit the first flames of controversy when he publicly announced in late March that he would not be stopping at Dachau during his upcoming visit to West Germany.

He had no desire, the president said, to impute guilt for the war to a new generation of Germans. And then he made the astonishing statement that “very few” Germans living in 1985 were old enough to remember World War II and “none of them” had participated in Nazi atrocities.