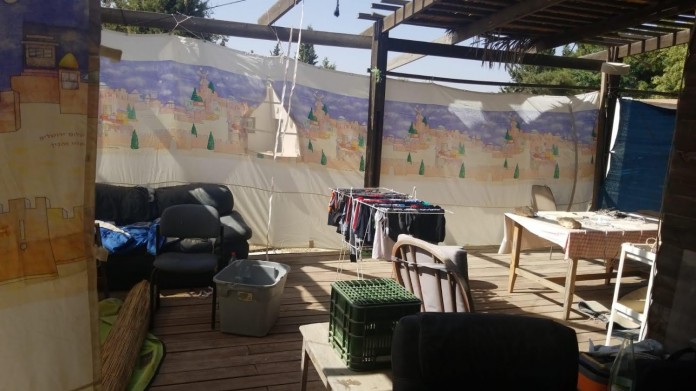 “Mommy, when are we taking the sukkah down?” my daughter asked me while I prepared breakfast the morning after Sukkot was over.

“Hmm… I’m not sure,” I answered while the eggs sizzled on the stovetop. “That’s Abba’s department, we can ask him.”

“I’m sad that Sukkot is over,” she quietly responded.

“Me too,” I agreed. “It really was such a beautiful holiday.”

It’s not just young children who are left with the feeling of “What now?” after the chagim come to an end. Adults also feel the let-down. Don’t get me wrong, getting back to a normal routine after the holidays is healthy. However, the closeness that Hashem affords us during the High Holiday period is lacking in Cheshvan – which is also known as “Mar Cheshvan” (the bitter Cheshvan).

How can we bring the spirit of the holidays into this month? How can we cultivate spirituality without built-in holidays to assist us?

Apparently, there is a way, and the secret according to Rav Elimelech Biderman (citing Rav Mordechai of Lechovitch) is tucked away inside the ancient practice of korbanot.

We know, though, that every pasuk in the Torah is relevant, no matter the era, if we dig a little deeper. So if someone in 2020 wanted to “bring” a sacrifice to Hashem, how would he or she do so?

Holding back from something that’s really hard to stop is our modern-day “sacrificial offering” to Hashem. Now, let’s bring this concept full circle:

A mishnah at the end of Masechet Taanis states that a day on which a person brought a korban to the Beit Hamikdash was a Yom Tov for him. Therefore, any time we sacrifice a desire in favor of what Hashem wants, we are are creating a personal Yom Tov for ourselves.

So even though this month is described as Mar Cheshvan, don’t despair! Sure, there are no ready-made holidays to elicit spiritual growth. But through self-sacrifice, we can create our own spiritual holidays. When we hold back from temptation, we “bring” a korban – just like the korbanot in the times of the Temple. And we can bring a korba any day of the week, and thereby have Yamim Tovim all year long!

The month of Cheshvan has begun, and we have some choices before us now: Will we wallow in the absence of holidays? Will we give up on our spiritual goals because we have already failed once or twice (or even more)? Will we see ourselves as distanced from G-d because there is no shofar, no shul, and no sukkah?

Will we hope for Cheshvan to end quickly so Chanukah can bring us the light we need? Or will we create our own light and see each day as an opportunity to bring a personal korban? Every time we stop doing something that we know is wrong, the day transforms from mundane to holy.

Of course, after learning this idea, I was immediately tested to live up to it. A family member was pushing my buttons, and I felt my emotional temperature rise. I reflected for a moment on the beautiful idea of self-sacrifice and made a conscious effort to bite my tongue long enough to calm down. Suddenly, through my personal sacrifice, a random Tuesday afternoon was transformed into a personal Yom Tov.

Sacrificing is about giving up something for a greater goal – one that is in line with Hashem’s will – and there are countless opportunities throughout the day to practice this behavior.

A few days after teaching this lesson to a student, she shared her own success story with me. One evening, she wanted to relax and scroll through Instagram. She had been working on limiting her social media time and admitted that what begins as five-minute “check-ins” usually turns into hours of wasted time. So before opening the app, she stopped and asked herself, “Instead of scrolling, what could I do right now that would bring me closer to my personal and spiritual goals?” Determined, she put her phone down and started a conversation with her husband instead.

Although seemingly mundane, these small “sacrifices” make all the difference in our access to spirituality.

Of course, we won’t always succeed at stopping ourselves, but even one successful moment is spiritually infinite in worth. When we sacrifice for Hashem and a greater goal, we create our own haven of spirituality. In this way, the Yom Tov season never has to end.

So even if the sukkah is physically put away, it doesn’t have to spiritually come down. Despite the fact that the shofar is no longer heard, we can create our own inner alarm clock for connection. Hashem’s closeness is ever-present; the question is: Will we make choices that enable us to access it this month, and during the entire year ahead?