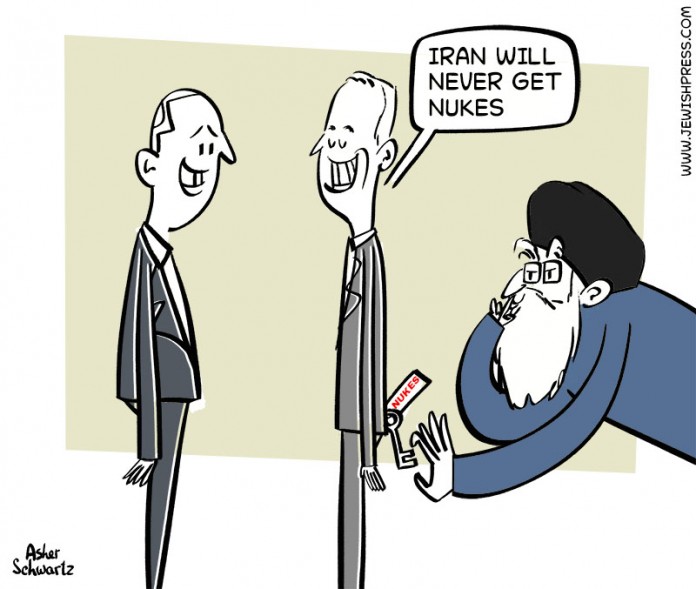 On August 4, both Minister of Defense Benny Gantz and Foreign Minister Yair Lapid briefed ambassadors from the member states that sit on the UN Security Council. While the occasion for their joint appearance was the escalation of terror attacks using UAVs against international shipping, most of the international attention was drawn to the statement by Defense Minister Gantz that Iran had violated all the guidelines established by the JCPOA (the Iran deal) and, as a result, it was only “around 10 weeks away from acquiring weapons grade materials necessary for a nuclear weapon.” This was not speculation by yet another columnist, but rather a statement in the clearest terms by the defense minister of Israel.

In response to the interviews, Lapid added several weeks later that he wanted to save the public from a sense of panic from the news that Iran had become a nuclear threshold state. He based his argument by drawing a distinction between a state that had become a threshold state and a state that had become a threshold state only with respect to the amount of enriched uranium it had in its possession. While not defining how much time Iran needed to actually produce a nuclear bomb, he did say it was not just a matter of months. When asked how close Iran was to a nuclear weapon, he answered: “It was a lot more.”

Israel’s situation with Iran poses a real dilemma for diplomacy. On the one hand, diplomacy must always be accurate. The Iranians specialize in deception. Israel does not and should not play that game. On the other hand, Israel must build an international coalition against Iran’s determination to deploy nuclear forces and threaten the security of Israel, the Middle East, and the entire world. It must motivate potential members of that coalition to understand the urgency of the situation and why the time to act together has arrived.

It is important to lay out what specialists mean by Iran having an operational nuclear weapons program. There are three elements involved. First, Iran needs delivery systems to carry its nuclear weapon to a target. In 1998, Iran first tested its Shahab-3 missile which was based on North Korean technology. In 2003, the Shahab-3 missile became operational in the Iranian armed forces. It had a range of 1,300 kilometers – the distance required to strike Israel from bases located on Iranian territory.

Between 1998 and 2017, Iran conducted 21 flight tests using the Shahab-3. In 2015, the Iranians released video tapes for the first time showing that Iran had created a system of underground missile bases, from where it could launch its missiles from silos. In other words, the need for a delivery system to launch nuclear weapons should not hold up Iran’s quest for a fleet of nuclear weapons. Iran was already there.

Second, commentators like to point out that the weaponization of uranium into an actual explosive device (in Hebrew “kvutzat haneshek”) takes time to develop. However, the quarterly reports from the International Atomic Energy Agency during 2011 already contained worrying information back then. The May 2011 report presented Iranian military research that had taken place including “the removal of the high conventional explosive payload from the warhead of the Shahab-3 missile and replacing it with a spherical nuclear payload.”

Iranian documents that were in the hands of the IAEA acknowledged that detonation of its warhead was to take place at an altitude of 600 meters. That happened to be the height of the first atomic explosion in 1945 over the Japanese city of Hiroshima.

Third, while uranium is normally found in two forms or isotopes – U-238 and U-235 – only U-235 can undergo nuclear fission and release the energy of an atomic bomb. Natural uranium is only 0.7% U-235. Enrichment seeks to increase that level to 3.5% for a civilian reactor and to 90% for an atomic weapon. While the Iran deal limited the level of permitted enrichment to 3.5%, by 2019, Tehran was enriching to 4.5%, and later to 20%, declaring that it was ready to go up to 60%.

Because uranium enrichment is the most difficult step for states with nuclear ambitions to take, Tehran’s massive investment in enrichment is the most important indicator of Iranian determination to go the whole way to become a nuclear weapons state. Finally, when the enrichment process begins, the uranium that is injected into centrifuges is in a gaseous form. To build a nuclear warhead, the uranium has to be in the form of metal. In August 2021, the IAEA verified that Iran was producing uranium metal. It now seemed that Iran was preparing to make the final push to an atomic weapon, but that would not take years or months but rather, far less.

It would be a mistake to conclude that Israel has a great deal of time because the Iranians work sequentially, completing one component of their program before moving on to the next. The authoritative Institute for Science and International Security has made clear that the Iranians worked under the assumption that their work on the components would not be sequential and not be separated but rather had to be conducted “in unison.”

In Israel there has been a tendency for political leaders to blame each other for the situation that has emerged. There is only one party that is to blame and that is the Iranian leadership. Right after the first nuclear agreements were reached between Iran and the European Union’s EU-3 in 2005, Tehran was burying the evidence of its nuclear work at various facilities that were supposed to be inspected. This has been the pattern ever since. Unfortunately, the Western powers have been torn between their own naivete and their desire to protect their commerce with Iran. The inaction that resulted is what allowed the Iranian nuclear program to continue to expand.