The headlines of our times expose the enslavement of our minds


Beyond the headlines, lead stories in once-reputable publications read like supermarket tabloid exposés, often quoting profanities in full with no regard for the dignity of public discourse.  The journalistic axiom “if it bleeds, it leads” has spread from lurid content to lurid language.

It would be nice to think that news outlets might adopt standards somewhere above the lowest social common denominator.  But our modern economy is driven by ratings, views, likes, and shares. The bigger the audience, the higher the advertising income.

The sad reality is that human nature draws us like moths to the lewd and the crude, to the suggestive and the salacious. If we as consumers lack the self-discipline to filter our own online consumption, it’s naïve to think that the media will do it for us.

It’s easy to discount the corrosive effect of salty speech upon our collective character.  Some even celebrate as progressive the freedom from moralistic constraints that once limited the free use of spicy vocabulary.  But just as there are reasons for linguistic rules that govern grammar and syntax, there are reasons for the social conventions that govern which words and ideas are fu for public consumption.

There’s no question that language is under siege from every quarter. The mangling of sentence structure destroys verbal clarity.  The strictures imposed by political correctness muddy thinking and understanding. And by delighting in profane and debased expressionism, we disconnect ourselves from the refinement that is the hallmark of human nobility.

Ironically, this is the cultural fallout of unrestricted freedom.  And it is the continuation of a battle for the soul of mankind that has been raging for over 3000 years.

EXILE OF THE MIND

To be precise, it was 3540 years ago that the incipient Jewish nation went down to Egypt.  Initially welcomed and honored upon their arrival, the sons of Jacob and their families expanded and flourished.  But exponential growth and prosperity aroused jealousy and suspicion. Before long, the Egyptians enslaved the Jews, eventually subjecting them to the most oppressive labors and cruelest forms of torture.

After 210 years, one man arose among them.  Originally a prince of Egypt, Moses came to the defense of his brethren and, upon doing so, was forced to flee for his life.  But his selflessness eventually positioned him to lead his people out of slavery and guide them onto the path toward spiritual and moral perfectionism.

But that nobility of spirit could not be set free in Egypt itself.  According to Jewish mysticism, the Egyptian oppression was so profound that “speech was in exile.”  Without a free moment to think, without the opportunity for introspection and reflection, the Jews were incapable of elevating their speech above the mundane interchanges of slavishness.  With their spirits broken by their taskmasters, they had no vision of achievement beyond day-to-day survival. Consequently, their language remained little better than the communicative grunting of beasts.

All that changed with the redemption of Passover.  The Hebrew name, Pesach, can be interpreted phonetically as peh sach – an open mouth.  The same freedom that allows us to express ourselves however we choose carries with it the responsibility to choose how we express ourselves.  If we permit our speech to become debased, then we debase our thoughts as well. And if we indulge in base thoughts, base actions are sure to follow. When that happens, we become slaves to the self-satisfaction of impulse and desire.

Clear use of language produces clarity of thought.  Disciplined speech produces intellectual and moral discipline.  Refined vocabulary goes hand in hand with refinement of character.  Respectful silence promotes respect for all people and acknowledges the legitimacy of diverse opinions and perspectives.

Ultimately, elevated speech is the expression of true freedom.

Beginning this Friday evening, we celebrate a revolution that changed the world 3330 years ago. Mankind awoke to a new reality as headlines around the world reported how a small and downtrodden people had thrown off the shackles of slavery and embarked on a mission of higher purpose.  The lesson of their redemption is to recognize the true value freedom – not as a goal, but as an opportunity to reach for the heavens.

As human beings, we are only free when we gain control over our own impulses, aspire to moral greatness, and commit ourselves to master our thoughts, our speech, and our actions – which, together, constitutes the ultimate refinement of our souls. 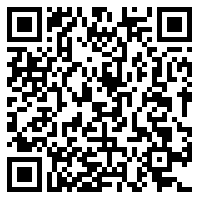