In the beginning a flame was lit.

It was no earthly flame, born of elements of the spinning planet, but was rather a divine spark lit in the neshamah, or soul, of Abraham, who made a covenant with God that his people would follow him. This hallowed flame was passed on to Abraham’s son Isaac, and to Isaac’s son Jacob, and to the children of Israel through the ages.


Resplendent and glorious, this interminable flame manifested itself as a force of indomitable human spirit, of unflinching trust in and love of God. It was a sublime flame that could shine a righteous path for its holders.

It came to pass that the outside world did not take kindly to the children of Israel – Jews, as they came to be called. From ancient times through our own, generation after generation of Jew haters from every corner of the world have tried to extinguish the flame. But year after year, century after century, millennium after millennium, the Jewish flame has resiliently withstood the test of time.

There were the Babylonians who destroyed the First Temple in Jerusalem and the Romans who laid waste to the Second Temple and then struck again at the fortress of Betar. (The Jerusalem Talmud relates that the number of Jewish men, women, and children slain at Betar was so enormous that the Romans “went on killing until their horses were submerged in blood to their nostrils” (Ta’anit 4:5 [24a-b]; Midrash Rabbah 2:5).

In Spain and Portugal, the Jews were tortured and burned at the stake. Chmielnicki and his marauding Cossacks killed tens of thousands of Jews and destroyed hundreds of Jewish communities. Kristallnacht, Babi Yar, Dachau, Auschwitz – the Holocaust wiped out six million of the Jewish people.

All this, and yet the Jewish flame is not doused.

All this, and yet we Jews have carried on.

There have been horrific atrocities in which the beast in man unleashed itself upon the Jewish people: unspeakable massacres, pogroms, and genocides.

All this, and yet we have shown those who would smite us that they can spill Jewish blood but they cannot blow out the eternal Jewish flame.

The Jewish flame is a special flame. It may flicker during turbulent storms, it may sway in heavy winds of hate, it may dim when darkness descends on the Jewish people, it may compress in the frost of tyranny, it may even lose its glimmering luster when its own people cry rivers of tears, but it always gathers itself and grows back to its full, intense, luminous form.

It is, in its pure, unadulterated, undiminished form, a shapely, beautiful, effulgent, radiant, powerful flame.

The Jewish flame is not like any ordinary flame. It is a light of inspiration, a light of righteousness. It is a flame that can be nourished and grow and has no limits as to how brightly it glows.

The Jewish flame is a flame of many wonders. It is a flame of zest for life: of passion, of intellectual curiosity, of the iron will and resoluteness that enables Jews to carry on no matter what manner of tragedy befalls us.

Those who hate us may try snuffing out the flame but they will never succeed. Our enemies may inflict damage but they always learn that in the end we will outlive their hatred, their barbarism, their evil.

The Jewish flame is eternal because it is the radiance of God, glowing on the wick of our souls. It is left to us, however, to make it sparkle in all its uncontained brilliance. Indeed, the greatest threat of immolation comes not from external sources but from within: secularization, assimilation, intermarriage, and lack of support for Israel by the children of Israel.

As masters of the flame, it is our mission to make it radiate and beam, to follow the path it illuminates and be faithful in our ways. Holy and sanctified, that boundless flame shines beyond mortal life into perpetuity, and we must never forget that no matter how many clouds hover over us, it can never be quenched.

No human act or mortal endeavor can make it disappear. No iniquitous pact or machination can wash it away. No act of evil can extinguish it. Like the Jewish nation itself, it is there and will always be there – alive and vibrant, waiting to be stoked by a pure and meritorious heart, love of Torah, and devotion to mitzvot. 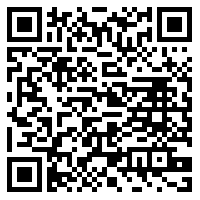