Last week, two former Obama administration officials, Eric Lynn and Daniel Shapiro, took to the pages of The Miami Herald to claim that President Donald Trump’s policies have been harmful to Israel and indeed “endangered the Jewish State in many ways.” As Israelis and high-ranking retired military officers who have worked for decades on the nation’s security, we cannot think of a more baseless claim. Whatever one thinks of Trump, his record on Israel outshines not only that of his predecessor, but of all previous U.S. presidents.


Lynn and Shapiro’s piece relies on an extraordinarily selective history—not mentioning some of Trump’s most significant actions or former President Barack Obama’s most destructive ones. So let’s directly compare the record of the Trump administration with that of its predecessor.

Trump recognized the unified city of Jerusalem as Israel’s capital, a historic shift whose magnitude can be appreciated from the fact that several prior presidents promised to do it, but none had the courage to follow through. Other countries are continuing to follow Trump’s lead, and thus Israel’s sovereignty over the Western Wall and Temple Mount is now more secure than ever.

Under the Obama administration, Vice President Joe Biden threw a much-publicized fit when Israel announced plans to build some apartments in an ultra-Orthodox neighborhood of Jerusalem (but across the magical “Green Line”). Our right to build anywhere in our capital must be respected.

Trump did what prior presidents did not even dream of and recognized Israel’s sovereignty over the Golan Heights, thus ensuring this strategically vital territory would not fall into the hands of Iranian proxies. Obama insisted that Israel accept negotiations based on the “1967 borders,” pushing a plan that would have put Israel’s security in United Nations and Arab hands and would deny Israel a defensible border—the Jordan Valley. Obama allowed the U.N. Security Council to pass its infamous Resolution 2334—opposed by almost every Democratic senator—that encourages a boycott against any Israeli presence in these territories.

The Trump administration announced the “Pompeo Doctrine,” clearly articulating that Israeli communities in Judea and Samaria (“settlements”) are not illegal and are part of Israel’s Jewish heritage.

Obama forced Israel to accept an unprecedented 10-month freeze on any building of Jewish homes in these areas, ostensibly to encourage Palestinians to negotiate, which the Palestinians nevertheless refused to do.

Obama made a deal with Iran that gave it access to billions of dollars that they used to terrorize the whole Middle East and in effect impeded Israeli military flexibility against Iranian targets. Under Trump, Israel has gone on a sustained offensive against Iranian proxies in Syria, launching numerous attacks on imminent threats. Israel is also widely thought to be responsible for a series of unexplained explosions at Iranian nuclear and industrial facilities that have significantly set back Tehran’s weapons program. Such attacks were off-limits under Obama, who did not want anything to upset his Iran nuclear deal.

Finally, Trump coordinated the most successful Middle East peace effort in history, opening formal relations between Israel and a growing list of Arab states, including even such former arch-enemies as Sudan, which has now been firmly pulled from Iran’s orbit. This wave of normalization is truly epochal. Indeed, the Obama doctrine held that Israel could not achieve peace with Arab states without giving away vital territory to the Palestinians. Trump proved that Israel did not have to choose between expelling Jews from their homes and peace.

Jerusalem, the Golan, the legality of settlements, pushing back on Iran and making peace between Israel and Arab states—each of these would have been enough to make Trump a game-changing leader for Israel and its security. But the whole is even greater than the sum of its parts. It has ushered in a period of unparalleled diplomatic calm and goodwill for Israel. Few now recall that during the Obama years, Israel was under constant attack from the European Union and many talked of Israel’s coming isolation. Now the opposite has happened, and the specter of BDS has receded.

Israelis overwhelmingly view the Trump administration as a historic period that has fundamentally transformed the country’s international standing and security. A recent poll showed Israelis favor Trump by a margin of five to one. That means that even most left-wing Israelis prefer Trump to Obama’s vice president. Indeed, all of Trump’s Israeli initiatives, from recognizing Jerusalem to the Abraham Accords, have had overwhelming support from politicians of all major Israeli parties.

Obama tried to frame his hostility to Israel as being focused on Israeli Prime Minister Benjamin Netanyahu, even if other Israelis may have suffered from the collateral damage. But Trump has managed to get along both with the prime minister and with his political rivals.

Israel respects American democracy and is committed to working positively with whomever is elected on Nov. 3. But when American officials put their views of Israeli security or those of a stray Israeli pundit above those of Israel’s elected officials, they do not show us the same respect.

(IDF Brig. Gen. (Ret.) Amir Avivi is the founder and CEO of Habithonistim–Protectors of Israel) 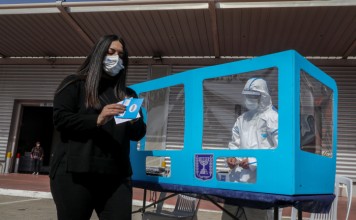