Question: In the haftara for Parashat Naso, we read about Manoach’s wife (mother of Shimshon), seeing things that her husband did not. We are never told, however, what her name was. Why?

Answer: Let us review the haftara. Taken from the Book of Judges (13:2-25), it opens with the statement, “Va’yehi ish echad miTzor’ah… – There was a certain man of Tzor’ah, of the family of the Danites, whose name was Manoach; and his wife was barren and had not given birth.”

An angel then appears to her – “Va’yeira malach Hashem el ha’isha” – and tells her she is going to give birth to a son. He then instructs her not to drink wine or any other strong drink, or eat any unclean food, for she will give birth to a son who will be a nezir Elokim (a nazirite unto G-d) from the womb whose hair will never be touched by a razor and who will begin to save Israel from the hands of the Philistines.

The woman then tells her husband that a man of G-d “whose countenance was like the countenance of an angel of G-d” had appeared to her. (She was unaware that he was an angel; she thought he might be a prophet or holy man.) She proceeds to relate to her husband the instructions she received.

We are then told that when the angel appeared again in response to Manoach’s entreaty, she called her husband, whereupon “Manoach arose and went after his wife, and came to the man and said to him: Are you the man who spoke to the woman?” The angel answered, “I am.”

The angel then repeated the instructions he had given his wife, after which Manoach expressed the desire to detain him so they might prepare a young goat for him. The angel declined but suggested they make instead a burnt offering to Hashem. The angel then ascended to heaven in the flames that arose from the altar upon which Manoach placed the young goat and a meal offering. Only then did Manoach and his wife realize the messenger was an angel of G-d.

Manoach then said to his wife, “We shall surely die because we have seen [an angel of] G-d.” But his wife wisely replied, “Had G-d wanted to kill us, He would not have accepted the burnt offering and the meal offering from us, nor would He have shown us all these [miracles] or let us hear all these [good tidings].” We are then told that the woman gave birth to a boy whom she named Shimshon.

The Talmud (Bava Batra 91a) states that Manoach’s wife’s name was Tzlilponit, noting that her name, like that of the mothers of several other great Biblical figures, is of no particular importance.

The fact that the angel appeared to her first does not necessarily prove that she was greater than her husband. Her greatness lay in her reaction to the angel’s departure and her ability to grasp matters divine, leading her to calm her frightened spouse. Tzlilponit was evidently endowed with more vision than her husband.

According to one opinion in the Talmud (that of R. Nachman), Manoach was an am ha’aretz, an ignoramus, for Scripture states: “he went after his wife.” R. Nachman b. Yitzhak disagrees, citing numerous sources to prove that Manoach was wise. He argues that “he went after his wife” merely means that he followed her wise counsel. Even this explanation, though, places him in a secondary position to his wife.

Tzlilponit walked in the footsteps of her ancestors. When Hashem told Abraham that a great nation would descend from him and that the land of Canaan would be given to his progeny for an everlasting inheritance, He also told him that his wife, Sarah, would give birth to a son who would be the progenitor of this great nation. Abraham’s first reaction was, “Lu Yishmael yich’yeh lefanecha – Would that Yishmael live before You!” (Genesis 17:18).

Later on, Sarah was perturbed by Yishmael’s behavior and very much concerned with his influence on Yitzchak. She demanded of Abraham, “Garesh ha’amah hazot ve’et benah, ki lo yirash ben ha’amah hazot im beni, im Yitzhak – Drive away this bondwoman with her son, for the son of that bondwoman will not inherit with my son, with Yitzchak” (Genesis 21:10).

Abraham was distressed, both at the revelation that his elder son had gone astray and that Sarah wanted him to cast him out (see Rashi). But Hashem told him, “Kol asher tomar eilecha Sarah shema bekolah – Whatever Sarah tells you, heed her voice.” Thus, Abraham was asked to make a decision affecting the destiny of his progeny based upon his wife’s counsel. 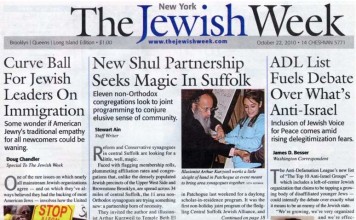