Answer: We noted in previous weeks that some maintain that saying “Amen” is fine while others argue that doing so is a “hefsek.” The same is true of saying the words “Keil melech ne’eman” before Shema. Rabbi Yehuda b. R’ Yakar believes these words should be said while the Ramban believes they constitute a hefsek.

The Mechaber (Orach Chayim 167:6) rules that a person must eat immediately upon completing the blessing. However, he rules that none of the above interruptions are considered hefsekim since they are related to the blessing and constitute seudah needs.

The Rema (ad loc.) adds that, nevertheless, a priori a person should have everything in place so that he doesn’t have to speak between saying the berachah and eating. He also writes that a person at the table who speaks doesn’t need to say another berachah if the person running the table (to whose berachah he listened) already ate his piece of bread.

The Shulchan Aruch Rav (Orach Chayim 167:10) qualifies the Rema’s ruling, writing that he doesn’t need to repeat the berachah only if his words were related to the meal (e.g., “Pass me the salt, please”). He does, however, have to repeat it if he said something unrelated (e.g., “What’s tomorrow’s forecast?”).

The Mishnah Berurah (Orach Chayim 167:43) notes that this ruling – even with the Shulchan Aruch HaRav’s qualification – is opposed by most Achronim, including the Taz, Magen Avraham, Elyah Rabba, Pri Chadash, Chayei Adam, and the Gra. Since “shome’a k’oneh” (hearing is like saying), there is no difference between the person who said “Hamotzi” and those who listened to him and were yotzi with his berachah. None of them may make a hefesk between saying the berachah and eating and they all must repeat the berachah if they made a hefsek.

In any event, what we see from this Talmudic passage is that speaking between saying a berachah and performing the deed for which one said the berachah is not allowed and generally constitutes a hefsek, requiring one to repeat the berachah. 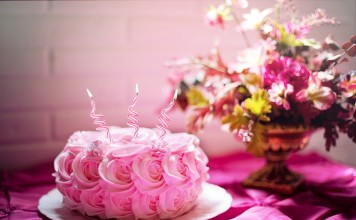