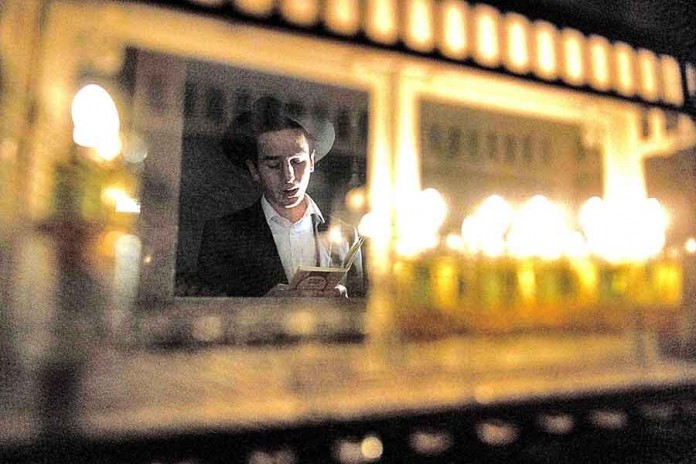 Chanukah presents us with a dilemma. The custom of eating foods that contain a lot of “grease,” to remind us of our victory over Greece, has a special place in our Chanukah observance. While most of us really enjoy fried latkes and assorted donuts, those aren’t exactly the healthiest of foods. But I am happy to announce that I have found a way that you can have latkes/donuts and enjoy them too, in a manner that doesn’t add any calories, and isn’t at all unhealthy. In fact, the more donuts/latkes you enjoy on my program, the better. What’s more, my program is free and doesn’t entail any obligation.


One day, as Rabbi Shraga Feivel Mendlowitz was preparing to begin his shiur, his talmidim went to gather chairs. Rabbi Mendlowitz noticed one talmid who brought a chair and sat down to await the shiur beginning. He told the talmid that it was a wasted opportunity. If he had brought two chairs, one for someone else, he could have had a chair for himself and performed a chesed for someone else. But instead, he had only concerned himself with his own needs.

When a new couple stands together under the chuppah, the universal custom is for the chosson to step on and shatter a glass.

(As an aside, following the chuppah, my father often carefully snatches the cloth napkin with the broken shards in it. He then presents it to the chosson during Sheva Berachos, as a reminder of the last time he was able to “put his foot down.”)

The well-known reason for doing so is so that at the moment of our greatest joy, we demonstrate that our celebration is incomplete as long as the Bais HaMikdash has not yet been rebuilt.

The Imrei Emes, however, offered an additional symbolism of the smashing glass. Before one is married, he is concerned with his own needs, metaphorically filling his personal cup. Under the chuppah, right after he has married, the chosson smashes the glass, symbolizing that he can no longer only worry about his own desires and needs. From now on, he has to care for his wife and ensure that he is tending to and “filling her cup” as well.

When describing the intensity of the plague of darkness in Egypt, the Torah states, “No man could see his brother, nor could anyone rise from his place.” (Shemos 10:23)

The Chiddushei Harim notes that the greatest darkness is when one doesn’t notice others. When one goes about his life wrapped in his own bubble of needs and wants and doesn’t stop to consider the situation, perspective, or plight of others, that is true darkness.

Conversely, when one lives beyond himself, investing time and emotional energy to consider others, that illuminates the surrounding world. The intense darkness of Egypt was the result of the fact that “no man could see his brother.” They were too busy caring only for themselves.

At the beginning of the recent Torah portion of Miketz, Pharaoh had two dreams that disturbed him terribly. His advisors tried to offer interpretations – including that he would have seven daughters who would subsequently die – but Pharaoh rejected all of them. It was only when Yosef informed him that there would be seven years of plenty followed by seven years of famine that Pharaoh accepted his interpretation.

What made Pharaoh so confident that Yosef’s interpretation was correct?

As a monarch, Pharaoh understood that his dreams were not for him alone but that they affected his entire kingdom. A king doesn’t live for himself, but rather with the weight and responsibility of his entire kingdom. The interpretations of the Egyptian magicians and wise men suggested that his dreams portended personal events regarding his own family.

Yosef, however, explained the national message and suggested what needed to be done for the sake of his entire kingdom, and that resonated with Pharaoh.

We light Chanukah candles in a location where they can best be seen by others. The “festival of lights” isn’t just celebrating the light we generate for ourselves, but more significantly, the light we spread to others. We light one candle at a time, symbolizing our ability to add a little more light to the world through our actions and words.

So, how can you enjoy endless donuts and latkes without getting fatter? Give them away!

The good news is that even if at the time you’re reading this, Chanukah has already concluded, you can still enjoy the light of Chanukah and donuts and latkes.

As long as we are thinking about others, and seeking to make their day a little brighter, the Chanukah candles continue to burn within us, illuminating our lives, and brightening the world.