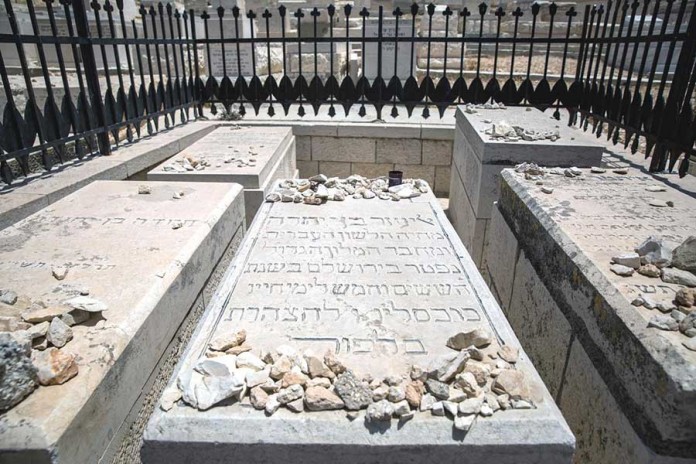 Erecting a tombstone on top of a grave is an ancient and important Jewish custom. The practice most likely originated with Yaakov Avinu, who erected a monument upon the grave of his wife, Rachel.1 Some suggest that G-d Himself instructed Yaakov to erect a monument on Rachel’s grave.2 In fact, some authorities argue that the requirement to place a monument on a Jewish grave is actually a Torah obligation.3 According to other authorities, it has the status of a rabbinic enactment.4 Either way, a tombstone is halachically required.5 In Talmudic literature, a tombstone is referred to as a “nefesh,” a soul, which further highlights the importance of having one.6 In Scripture, a tombstone is often referred to as a “tzion,” meaning “marker” or “monument.”7

One should factor in the cost of a tombstone when budgeting or dividing the expenses related to a death. The funding for all death related expenses must be provided by those who inherit the estate of the deceased, whether from their own funds or from the inheritance.8 In the event that a family cannot afford to purchase a tombstone, the community must step in to pay for it. The monument need not be too large, nor should it be too small. Rather, it should be of a size that quickly and clearly identifies the site as a grave.9 A person is not permitted to request that a tombstone not be erected upon their grave, and any such requests must be ignored.

The Talmud teaches that there is no reason to erect special monuments in memory of righteous individuals, especially those who were scholars, as “their teachings are their memorial.”10 This statement is taken quite literally by most authorities, and in fact, the halacha is essentially in accordance with this view.11 Monuments are generally made from stone,12 and are subject to wear and tear due to aging, the elements, and even vandalism. Torah teachings, on the other hand, are passed down from generation to generation in perpetuity, and remain forever. Nevertheless, even righteous individuals must have a tombstone of some sort on their grave.13

There are a number of reasons why a tombstone must be placed upon a grave. The most important reason is that it informs visitors who is buried there and allows them to pay their respects and offer prayers.14 It also serves to warn Kohanim that there is a dead person buried in the area so that they know to keep away.15 We are taught that the soul of the deceased receives pleasure when a monument is erected upon its grave. It is also considered to be an expression of honor for the deceased.16 There are also Kabbalistic reasons why a person must have a tombstone on their grave.17 The Chida was once asked what to do regarding a person who instructed his family not to erect a tombstone over his grave after he passed away. The Chida told the family that such a request is to be ignored. He said that if the deceased had been aware of the benefits that a tombstone provides the soul, he would have never requested such a thing. He said that in order to comply with the request somewhat, they can erect a smaller than average tombstone. However, it must be large enough to be clear that it is a tombstone.18 So too, it must be large enough to have the halachic status of a seat and therefore it must be at least three by three tefachim wide and one tefach high.19

The Talmud discourages the elaborate and overly decorative monuments that are often erected in honor of those who passed away.20 Nevertheless, one will often find very elaborate structures constructed upon the graves of righteous individuals. This is very common at the gravesites of Chassidic rebbes. These structures are intended to shelter and accommodate the many visitors who come to pray at these graves. They often take the form of a small cabin, called an “ohel,” which allows visitors to be protected from the elements, to light candles beside the tomb, and to sit and pray. We are told that erecting an ohel upon a grave is the greatest form of honor that can be shown to a righteous person after their passing.21 In fact, a righteous person who requests that an ohel not be erected upon their grave may be ignored.22

Ultimately, there is no true prohibition against erecting monuments for anyone after their passing, even elaborate ones. It might just be that the Talmudic displeasure with monuments was simply in order to ensure that the righteous will be remembered by their teachings and good deeds, and not by such monuments. Nevertheless, a number of authorities justify erecting monuments as they inspire people to come and pray at the site.23 One should follow the community custom on this issue.24