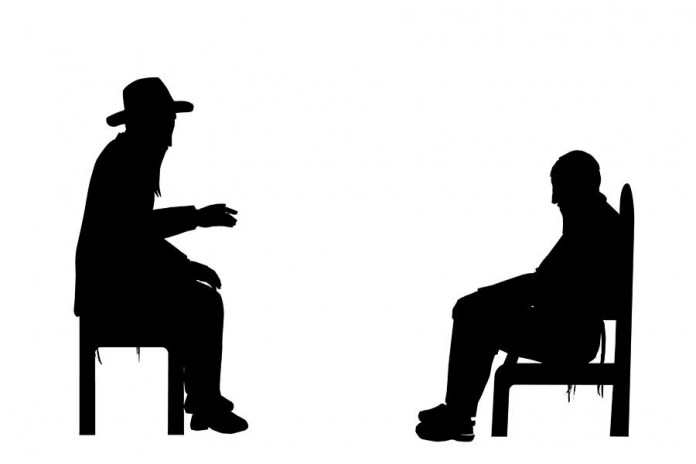 When visiting a Shiva house is it appropriate to console the mourners
by trying to explain tragedy or death?

A number of years ago a young man in his 40s was playing basketball, he took a jump shot, had a heart attack, and died on the court. The mother of this young man had been a very good friend of my mother, who had recently passed away, and I felt like I should be at the Shiva house. When I walked in, immediately the mother of the niftar said loudly, “Oh, Barry’s here, I can ask the question – why did G-d do this, why did this happen, Barry tell me the answer.”

Now this woman had known me since I was a young child, and she also knew that I’m Rabbi Shafier and supposedly, I have answers. I sat down next to her and I said almost nothing. At a certain point I mentioned remembering her son as a young man, maybe added another comment or two, but I sat there and said very very little else. About a month later, my father spoke to this woman and she said to him, “Your son came to visit me and brought me tremendous consolation.”

Now here’s the question. A woman asked me a question, a pointed one; why didn’t I answer it? If you look at theshmuz.com, you’ll see there are many shmuzim in which I deal with why bad things happen to bad people. I even have one titled Only the Good Die Young, so clearly this is a question I had dealt with before. So why didn’t I give her a valid hashkafic answer?

The answer is that there’s a time and a place for everything. In the beit midrash, if someone asks you a valid hashkafic question, you answer it. In a Shiva house, the focus is to give consolation, it’s not to answer questions, not to debate philosophies and certainly not to answer why would this happen. The job of the people coming to the Shiva house is to offer nechama, to be there in the pain, to share with the people who are sitting Shiva, and to let them know that you are with them. The less sad, the better.

– Rabbi Ben Zion Shafier is founder of The Shmuz and author of 10 Really Dumb Mistakes That Very Smart Couples Make (available at theshmuz.com).

The main goal of nichum aveilim is to show support, mainly by just showing up. Just taking the time out of our busy schedules to acknowledge someone’s state of mourning is a gesture that can go a long way. Being there for our friends and even acquaintances can be very meaningful to many even if they don’t have much to say in the moment. If an avel wants to open up about his feelings or memories of his lost loved one, our job as menachamim is just to listen and support.

Attempting to explain difficult philosophical ideas, of issues of kaparah and tikkun, isn’t a way to give nichum for most. Even more so in the event of tragic or premature death, such comments can have the opposite effect on those that need comfort the most. Another common pitfall is trying to claim that you understand their pain, this will mostly not be helpful, to say the least. Only someone who had a similar loss might be able to mention such words, as we find that amorah Rabbi Yochanan would console those who lost children by telling them of his numerous tragedies with his own children.

Most simply don’t have much to say to aveilim and that’s fine; it’s still a great mitzvah to visit with aveilim even for a short time.

When one loses a very close relative, he/she is at a loss beyond compare that for that moment there are no words in one’s grief. We see that from Aharon’s response to the loss of his two sons, Nadav and Avihu (Vayikra 10:3): “Vayidom Aharon – and Aaron was silent.”

I would like to quote from a gentleman whom I met years ago on a few occasions in Boro Park’s Anshei Sfard, on a Shabbos morning when he was spending Shabbos with his father-in-law, Rabbi Friedman, a very stately and respected member of the shul. The son-in-law, Rabbi Maurice Lamm, graciously allowed me to engage him in conversation as I fondly remember.

Rabbi Lamm, zt”l, and his wife Shirley Lamm are the founders of National Jewish Hospice; he is also the author of the famous work The Jewish Way in Death and Mourning.

We quote from page 136 in that work. “A sacred duty devolves upon every Jew to comfort the mourners, whether he is related to him or not, and whether he was a close friend or a passing acquaintance. In Judaism, exercising compassion by paying a condolence call is a mitzvah, considered by some of our greatest scholars to be Biblically ordained…

“It is man’s duty to imitate G-d: As G-d comforts the bereaved, so man must do likewise. Consolation is considered a G-d-like action, which all the children of Israel must perform…

“Recognizing this state of mind, the visitor comes to the house of mourning, silently, to join the bereaved in his loneliness, sorrowfully to sit alongside him, to think his thoughts and to linger on his loss. The warmth of such human presence is inestimable…

“The purpose of the condolence call is not to convince the mourner of anything at all. This is the time for accompanying him on his very own path, not for argumentation or debate….”

May G-d comfort all the mourners of Israel.

– Rabbi Yaakov Klass is chairman of the Presidium of the Rabbinical Alliance of America; rav of Congregation K’hal Bnei Matisyahu in Flatbush, Brooklyn; and Torah Editor of The Jewish Press. He can be contacted at yklass@jewishpress.com and Rabbi@igud.us.