Can anyone honestly still feel that they have control of their lives? The last six months have accomplished many things, but one of the most important lessons should be the clear demonstration of how little we are in control of. Hashem has shown us how little we can plan and arrange on our own. Simchas, businesses, schools, daily routines, and schedules all changed and manipulated in a moments notice. When will it all end? Only G-d knows, because only He can end it. And the sooner we realize that as an absolute truth the sooner He may end it for us.

As a matter of fact, at some point in the last half a year, everyone has had something in their lives changed. The most important thing to know about these changes is that they were orchestrated by Hashem personally. The realization that Hashem is the One who is in charge of everything that goes on in our lives is the key to making sense of it all. As a side benefit it also will enable one to live with serenity and tranquility.


The Gemara in Chagiga 5b explains the pasuk in Parshas Vayelech, “V’anochi hastir astir panai bayom hahu al kol harah asher asa – and I will hide my face on that day from all the evil that has occurred.” Rava says that Hashem says that although He has hidden his face, He will nonetheless speak to them “through dreams.” It is evident from the Gemara that even in a time of hester panim Hashem still speaks to us, albeit in different mediums.

What are those mediums? The Gemara in Yevamos 63a says that peraniyos (punishments) come to the world only because of Yisrael. The Gemara cites several pesukim in Tzefania as a source for this. The pasuk says Amarti ach tiri osi tikchi mussar – I (Hashem) have said just fear Me and take mussar” (Tzefania 3:6, 7). Rashi on the Gemara explains that when catastrophic events occur, it is to put fear into the hearts of Klal Yisrael in order that they will do teshuvah.

The Drashos HaRan (sixth drasha) says that occasionally catastrophic events occur in distant places. The reason for these occurrences is in order for B’nei Yisrael to be misorrer to do teshuvah and fear that perhaps these events will happen to them. When hearing about these events if it does not strike fear into them, and they just carry on with their daily lives, it is considered as if they have accepted hasra’ah and then sinned. If after hearing about these catastrophic events one continues his daily routine without changing, one has readily given up his life to be killed.

On Erev Yom Kippur one year the Chafetz Chaim wrote a letter to Klal Yisrael documented in Likutei Maimaros titled Ma lecha Nirdam (a quote from maftir Yona, meaning “How are you sleeping?!”). In it he wrote about the floods and earthquakes that occurred around the world that year. He wrote that it is a wonder why the rest of the world is not petrified. We are witnessing all of Nesaneh Tokef unfolding in front of our very eyes; mi bamayim, mi ba’aish etcetera. What is Hashem doing? He is being me’orrer us to teshuvah by showing us that everything is in His hands.

Continued the Chafetz Chaim, it is certain that if we had Nevi’im in our times they would be standing on platforms and being mesorrer us to teshuvah. However since b’avonosenu harabim we do not have Nevi’im Hashem sends His message through other means. As the pasuk in Barchi Nafshi says He makes the wind His messengers and the flaming fires his servants. Says the Chafetz Chaim, when we hear of a tremendous storm or other “natural” disaster, we must realize that this is our form of Nevi’im talking to us, this is Hashem talking to us.

Make no mistake, Covid19 is the largest “natural disaster” in modern history!

Rav Elchanan Wasserman zt”l Hy”d said that the pesukim that we read in Parshas Ha’azinu describe what will occur right before the geula. The pasuk says “Ki yadin amo… ki yireh ki azlas yad v’efes atzur v’azuv – when we will see that all is lost and nothing can save us” (Devarim 32:36). The Torah then says “Re’u ata ki ani ani hu…” Rashi explains the double lashon of “ani” that Hashem is telling us that we should understand that the peraniyos that have befallen us are from Him, but at the same time we should also realize that the yeshua that we had was from Hashem as well. The realization that none of our securities can actually protect us should in theory cause us to panic. However, the understanding that Hashem, our father, is here and is capable of protecting us should bring menuchas hanefesh.

May we be zoche to witness the rebuilding of the sukkas Dovid hanofales, which the meforshim say refer to malchus beis Dovid, and the building of the Beis Hamikash. 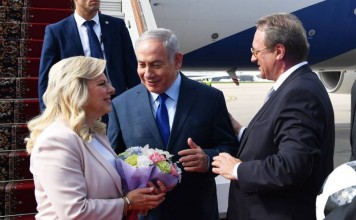