Why Are There Riots? Why are thousands of people across the country demonstrating in the streets, violently rioting, breaking and damaging personal and public property, and even harming and in certain cases murdering law enforcement?

If you only listen to the news, you would think it is because of the Black Lives Matter movement. Thousands of people protesting the unfair treatment black people receive from law enforcement. Of course, that doesn’t actually make sense. How could committing crimes be the response to crimes? How could civil unrest be the answer to wrongdoings? How can anyone think that we do not need a police department?


I am not here to tell you that it is likely funded and organized by people and organizations who seek to destroy this great nation, and damage the reputation of this great president, which it is. That is the obvious explanation. The organizers of these protests, which quickly turn to violent riots, undoubtably seek anarchy, as they openly state. Anarchy, for those who are not familiar, is lawlessness, mayhem and chaos. I don’t know if all the rioters actually have the same goals in mind, or if they have anything specific in mind, but that is the purpose the organizers intended for.

As Jews we know that there is more to every situation. There is a specific rhyme and reason for everything that happens and this is certainly no different. Especially, since it is not only happening in “other” states and cities; but because it is happening in our cities! No matter what the organizers believe their motives are, they are but puppets in the hands of the Master of the universe.

Why is Hashem making people riot and causing so much unrest, and instability? I think when the question is posed that way, the answer becomes a bit clearer. When was the last time so many people who were previously so secure in their homes and lives in America, began seriously contemplating moving to Israel? So many people, who would have never in a million years dreamed of moving are now having thoughts and conversations about just that. So many people previously felt protected in their communities, comfortable in their shuls and children’s schools, and had reliable steady jobs. How much of that has changed? How many people now realize that they can work remotely? How many children have not been in school for weeks and months? How many people feel safe and protected in their neighborhoods and communities?

Fellow brothers and sisters, we do not belong in this country. But so many of us have become too attached, too connected, and too comfortable. Something earthshattering had to happen to break some of those supports. Alas, welcome to the global Covid-19 pandemic, followed by violent rioting in cities around the country, including those that so many Jews call home. Do you still feel secure and protected? Or is the thought of moving to Israel becoming more of a reality?

We all know that Mashiach is coming, and we believe with a firm belief that he can come any day. And we also know that when he does come we are all going to pick up and move to Eretz Yisrael. One of the missions Melech Hamashiach will be tasked with is gathering all of Yisrael to Eretz Yisrael (Rambam hilchos Melachim 11:1). Unfortunately, there are certain difficult processes we may have to go through in order to uproot us from our current lifestyle. Seemingly, causing fear and distress are aiding in the development of our relocating to our proper home. 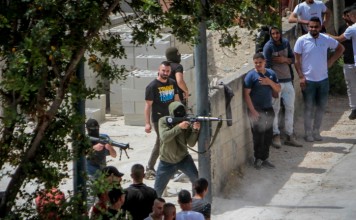