God was angry with Israel over the sin of the Golden Calf, “Let My anger flare up against them and I shall annihilate them (Exodus 32:10).” Moses successfully argued for the people, and “Moses turned and descended from the mountain, with the Two Tablets of the Testimony in his hand (15),” relieved, satisfied with the effectiveness of his prayers, and, thrilled with the gift of the Tablets.


Yet, just two verses later, “It happened as he drew near the camp and saw the calf and the dances, that Moses’ anger flared up. He threw down the Tablets from his hands and shattered them at the foot of the mountain (19).” Something happened in those two verses that changed Moses’ joy to shattering destruction, his relief to frustration, and his satisfaction to anger. This short, outwardly insignificant scene in the story of the Golden Calf continues to resonate in our relationship with God.

Joshua looked up the mountain and saw his master descending with the Tablets, and, “Joshua heard the sound of the people b’rei’o, in its raucous friendship, and,” seemingly ignoring the awesome Tablets in his teacher’s hand, “he said to Moses, ‘The sound of battle is in the camp!’ (17).” Disappointed in his student (Kohelet Rabbah 9:11; Tzror haMor), standing above him, Moses rebukes Joshua, and, “He said, ‘Not a sound shouting strength nor a sound shouting weakness; a sound of lost meaning do I hear!'(18).” It is in the following verse we read of Moses furiously shattering the Tablets.

A crack appears in the relationship between master and student, followed by the shattering of Moses’ intended approach to repair the sin of the Golden Calf, and a serious change in the relationship between the leader and his nation. Moses, who gave up much (Verse10), and risked his life mission (32) to advocate for the people, shatters the Tablets, executes the sinners, moves his tent far from the camp (33:7), eventually speaking to them with a face so radiant that the people feared to approach him (34:30). Interestingly, Joshua is absent from that final scene in which Moses descends from Sinai with the Second Tablets.

Where was Joshua? He was in Moses’ tent (33:11), the one that was far from the camp! The student who ignored the First Tablets to describe “the sound of battle,” was not invited to participate in the presentation of the Second Tablets.

Why did Joshua describe “the sound of the people in raucous friendship,” as the “sound of battle’? He heard the raucously friendly people, who, upon looking up and seeing Moses with the Tablets, begin to blame each other for the sin (Rabbeinu Ephraim). Joshua understood that people united one moment, and self-protectively switching to blaming each other the next, were never truly united. Joshua saw cracks in the Tablets; fissures unseen by Moses. Joshua sensed that Moses would eventually call for, “Each man, put his sword on his thigh; Let every man kill his brother (32:27).” He wanted Moses to heal the internecine battle before dealing with the sin. Is not, “You shall love your fellow as yourself (Leviticus 19:18),” the primary principle of the Torah (Shabbat 31a)? (“Fellow,” rei’a, the same word used by Joshua, b’rei’o).

“Not a sound shouting strength nor a sound shouting weakness; a sound of lost meaning do I hear.” Moses understood that his student was arguing for the people from within, as one of the people, a quality easily forfeit when slightly removed from them (Numbers 11:28). Moses, standing above Joshua on the mountain, above the people as he descended from His forty days with God, perceived that people connected horizontally, as friends, a friendship not formed as a shared vertical connection to God, could not be securely unified. As Rashi (Shabbat 31a) teaches, “What is hateful to you, do not do to a friend,” also refers to God as our vertical friend. Standing above Joshua and the people, Moses understood that people who are so quick to blame had never understood their friendship as their most significant connection with God. They had already splintered that vertical connection, and Moses decided to shatter the Heavenly Tablets.

Moses saw that Joshua appreciated the two linear dimensions of vertical and horizontal, and argued for one over the other. He also discerned that his student did not see how the two connections had to be spatial, existing in a third dimension.

The Ari haKadosh, the Holy Lion of Kabbalah, marks four points in prayer when we must pause and say, “I accept on myself the commandment to love others as myself (The Gate of Intentions, Prayer, #3).” 1. Before prayer; to empower each others prayer. 2. Eizeh hu mikoman, Chapter 5 of Zevachim, the only chapter in the Mishnah in which there are no disputes; to honor and celebrate shared vertical connections. 3. The Incense Offering, of which, at least one of its eleven spices is foul smelling, to teach us we must, as a vertical connection, connect with the imperfect, include even people whose spiritual values are foul smelling, and, 4. The daily Vidui, Confession, to acknowledge we are all imperfect. “I accept on myself the commandment to love others as myself,” is the only vertical connection necessary to securely connect horizontally. They are not two separate linear connections; they connect spatially in a third dimension.

Each time we battle over vertical values we stand on Sinai joining the conversation between Moses and Joshua. We succeed only when we listen to Moses’ words and cease to measure the two linear dimensions of the vertical and horizontal, connect the two spatially, on a third dimension, allowing that connection to enter the fourth, beyond time, eternal. 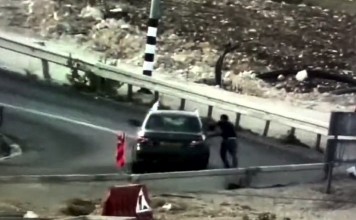