Jacob has spent twenty long years in the service of his father-in-law, Laban, in the town of Haran. He finally leaves, takes his four wives and twelve children with him, and makes his way back to Canaan and his father’s home. On the return trip, however, he needs to contend with his brother Esau. This is the brother from whom Jacob had stolen their father’s blessings and who as a result had planned to murder Jacob, which led to Jacob’s fleeing to Haran in the first place.

Jacob had every reason to suspect that Esau would still bear a grudge and plan to do him harm once he was again within Esau’s grasp. In an attempt to reconcile with his brother, Jacob sends word ahead to Esau of his return to Canaan. As part of his message, Jacob informs Esau of his wealth: “I have acquired cattle, asses, sheep, and male and female slaves.”


He is informed that Esau is on his way to greet him, together with 400 warriors. Jacob fears for himself and his family. One of his tactics, to hopefully appease Esau, is to send him lavish and extensive gifts of multiple flocks of all variety of domesticated animals, which included 200 she-goats and 20 he-goats; 200 ewes and 20 rams; 30 milch camels with their colts; 40 cows and 10 bulls; 20 she-asses and 10 he-asses; together with their accompanying herdsmen servants.

Jacob’s efforts are successful and the meeting of the brothers is a peaceful one. The Chidushei HaRim on Genesis 32:6, however, wonders as to why Jacob is informing Esau of his wealth. The entirety of Jacob’s message could be summarized as follows: “Hi Esau, I’ve been by our uncle Laban all these years. I’m wealthy. I hope we can get along.” It seems like an unusual message to a brother with whom Jacob hasn’t been in touch in twenty years and whom he suspects of murderous intentions.

The Chidushei HaRim explains that there was a deeper meaning in Jacob talking about his wealth. He was in essence putting the wealth out there as a target and saying if you need to hurt me, hurt my property, hurt my material belongings, but don’t touch my soul. He goes on to quote King David who used a similar approach when he stated “spread a table for me in full view of my enemies.” His meaning is that his enemies should focus on David’s material possessions and not his inner world.

May we remember what’s enduring and what’s fleeting, what’s important and what’s secondary.

Dedication: To the return of tourism to Israel. Let’s hope it continues. 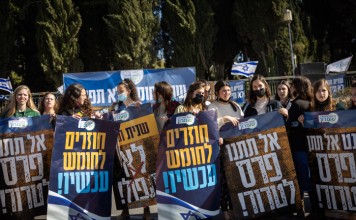