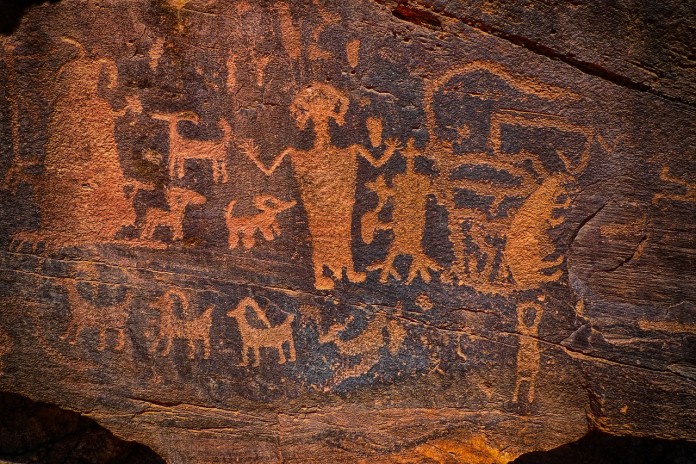 Rod Reuven Dovid Bryant and Jerry Gordon of Israel News Talk Radio – Beyond the Matrix bring back Kenneth L. Hanson, author of “Whose Holy Land? Archaeology Meets Geopolitics in Today’s Middle East. They discuss recent archaeological finds amidst the historic Israel-UAE Abraham Accord normalizing relations in hopefully, a warm peace. Which might lead to similar agreements with other Gulf Arab States and Kingdoms. However, the question is was it worth the price of “suspending” sovereignty over hundreds of ancient archaeological sites confirming millennia of Jewish presence in the Holy Land? Dr. Hanson is an Associate Professor in the Judaic Studies Department of the university of Central Florida in Orlando.

Here are takeaways from the Israel News Talk Radio – Beyond the Matrix interview with Dr. Hanson.


On the Historic Abraham Accord between Israel and the UAE.

Rod Bryant noted how archaeology “dovetails” the geopolitics of the historic Abraham Accord between Israel and the UAE. Dr. Hanson said the flight from Tel Avi to Abu Dhabi to seal the Accord represented the first “warm peace” in 25 years since the 1994 “cold peace” with the Kingdom of Jordan and the similar cold 1979 Camp David agreement with Egypt. It might lead to similar agreements with other Gulf States like Bahrain, Oman, possibly Saudi Arabia and other Arab countries. Hanson said, it recognizes the overarching “civilizational threat” of a nuclear Iran intent on developing an ICBM capable of reaching the “great Satan”, the US. It already has weapons capable of reaching Israel and even targets in Europe. Hanson noted that President Trump “tore up the pathetic agreement” that fostered Iran’s global terrorism threat. He contends that the Gulf Arab Emirates considered “Israel, a solid partner to counter the Iran Threat”. They also recognize Israel as a “high tech dynamo” with its six desalination plants on the Mediterranean capable of producing fresh water and drip irrigation fostering agricultural production. Gordon noted the UAE Sovereign Wealth Fund might be a contender for replacing China in investing in Israeli tech “startups”.

Dr. Hanson recounted his earliest student days in a small school on Mt. Zion during the era of “socialist” Israel “rummaging through archaeological sites”. He found it ‘intoxicating” to be standing on top of millennia of Jewish history”. Since the publication of his latest book several major archaeological discoveries and finds have been announced. He cited the discovery of what could be a palace during the Davidic period stemming from digs since 2005 in the Arab Quarter of Silwan below a parking lot. That and other discoveries have “outraged” Palestinians, who have claimed they were the original settlers of the area. This despite continual Jewish presence and the return to the ancestral lands of Jews from Russia and Arab Lands in the Middle east beginning in the 19th Century. Discoveries announced in August 2020 included archaeological evidence of the “burn marks” from destruction of the First Temple in 586 B.C.E. There was also evidence of Jews from both the Exile and Return 70 years later. Hanson likes to cite American Humorist, Mark Twain’s observation from his book, “Innocents Abroad” about his trip to the Holy Land: “History doesn’t repeat, but it rhymes”.

He noted the recent find announcement by the Israel Antiquities’ Institute of a 3,200-year-old fortress uncovered in Kibbutz Gal On, 70 kilometers south of Jerusalem. Hanson said it was built by Egypt “in cahoots” with the Canaanites under an alliance. It reflected the “tentacles” of Ancient Egypt in the region. The fortress, he characterized as a “blueprint in stone with four towers” had hundreds of potsherds that are the “equivalent of dinosaur bones” in Biblical archaeology enabling dating. The fortress was likely contending with the arrival of the Philistine “sea people” from across the Mediterranean and the “new kids of Israelis” from the biblical Book of the Judges. The find verifies the geopolitical succession of extinct Canaanites, Philistines and other groups mentioned in the Bible. Bryant said that “only the Jews survived” to return and rebuild their ancient land. Hanson spoke of the millennial persecution of Jews, which leave upwards of 16 million today, instead of an estimated 200 million. He noted the anti-Semitic Romans, whose Emperor Hadrian wanted to “obliterate” the truculent Jews ending the Bar Kochba Revolt in 135 C.E., resurrecting the centuries extinguished Philistines, renaming the Jewish lands, Syria Palestina.

The other recent find was the uncovering of 2,700-year-old major administrative center not far from the new US Embassy in Jerusalem in a dig led by Israel archeologist Eilat Mazar. Hanson noted the massive structure indicative of an ancient Israelite kingdom perhaps during the reign of King Hezekiah.

Was Israeli Sovereignty the price of the Abraham Accord?

The discussion turned to the question of what price did Israel pay to achieve a “warm piece” with the UAE under the Abraham Accord. Was it to preserve land for a future Palestinian State under the Trump Peace Plan? Hanson cited US Ambassador to Israel David Friedman suggesting that sovereignty was simply “in suspension”. He makes the distinction between “annexation” – taking of conquered lands, versus “sovereignty – the extension of Israel Basic Law to land it already possessed replacing the current Israeli Military Administration. New Right Yamina Party leader Ayelet Shaked suggested that “sovereignty” has become an “illusion”. She contends that occurred when Netanyahu was “trapped” in the National Emergency Government coalition with Gantz of the Blue White Alliance. Hanson noted that following the June 1967 six Days War Israel regained its ancient Jewish provenance, including the Machpelah Cave of the Patriarchs in Hebron. Hanson said, that raised the prospect of “why can’t we live” in Judea and Samaria? The Arabs in the disputed territories were not expelled as were 600,000 Mizrahi Jews from Arab lands in the Middle East and Jews from the disputed territories in the 1948 War for Independence. Hanson suggest that extension of sovereignty to the disputed territories of Samaria and Judea would offer an option of Israeli citizenship for oppressed Palestinians, a possible solution to the Arab Israeli impasse.

The Jewish archaeological Sites in Jordan.

Rod Bryant asked about the dozens of ancient Jewish Levitical sites in what is now the Kingdom of Jordan. Hanson referred to the Israeli nursery rhyme: “two banks has the river Jordan, one is ours and the other, also”. Hanson contends that was established in the 1917 Jewish Home Balfour Declaration and 1920 San Remo Palestine Mandate. However, geopolitical expediency by then British Colonial Secretary Winston Churchill in 1923 changed all that. The right bank became Transjordan – the Hashemite Kingdom of Jordan. In the 1948 War for Independence Jordan illegally annexed the West Bank that was retaken by Israel in the June 1967 War.

For further information on Dr. Hanson and his YouTube courses of Biblical Archaeology Treasures in Time see: https://www.youtube.com/channel/UC8rsGHGgB3IxUWqA7DPWVTQ