While the Palestinian Authority rails at Israel over its “settlement expanionist policies” a quiet move may be in process to grant a measure of autonomy in Jerusalem’s Arab neighborhoods.


Among the neighborhoods to be included in the PLO security force catchment area would be the northern “hot spot” neighborhoods of Shuafat and Anata.

Under the proposed agreement, the PLO police force would secure the neighborhoods without the need for prior coordination with Israel, thus granting the area a form of autonomy within the capital.

The proposal is being studied by PLO officials, who have said they will raise the matter with Palestinian Authority chairman Mahmoud Abbas and other government leaders. (Of course, the PA chairman is also the de facto leader of the PLO, and was its official leader until late last year, when he turned over the reins to chief negotiator Saeb Erekat.)

According to the report, “observers” see the proposal “as an attempt by Israel to “shirk their responsibilities towards the Arab population of Jerusalem and the camps surrounding the city.” The Arabs who live in those communities there hold blue Israeli identity cards, denoting they are Israeli residents; yet when traveling abroad, temporary Jordanian passports. They could, if they chose, turn to Israel’s Interior Ministry and apply to become actual citizens of Israel since they are technically residents of Jerusalem. But for many reasons, they don’t.

An Israeli security source pointed out that if carried out, the proposed move “could be interpreted as de facto partitioning of the capital into east and west. This could lead to major embarrassment for the right-wing government of Prime Minister Benjamin Netanyahu,” he said.

Since October, Israelis have been targeted by Arab terrorists in 108 stabbings, 37 shootings and 22 vehicular ramming attacks. In the past four months, 27 Israelis, one foreign citizen and a Palestinian Authority citizen have been murdered in terror attacks; 289 more wounded, many seriously.

Statements by Fatah, Hamas and Palestinian Islamic Jihad spokespersons have described the attacks as “heroic actions” and “the natural response to Israel’s crimes.”

The attacks are motivated for the most part by the lie spread by the Palestinian Authority media that Israel allegedly threatened Al-Aqsa mosque, as well as by the frustration, desperation and anger of the younger generation.

Most of the attackers have not been operatives of any established terrorist organization, and the current wave of terrorism has not been directed by any organization. Rather, it is being directly inspired by the intensive and sometimes subliminal incitement that has for decades been the driving force behind it. 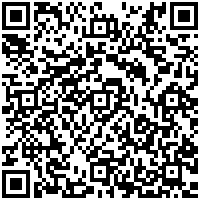