U.S. Senator Tom Cotton (R-AK) introduced legislation on Monday, Feb. 1, that would undo a regulation recently re-issued by the Obama administration that would ban the right to label any goods produced beyond the 1940 Armistice Line (the “Green Line”) as made in Israel.

The JewishPress.com reported last week that U.S. Custom and Border Protection re-issued a 1997 regulation – written at a very different time, under very different circumstances – which the State Department insisted it will now “strictly enforce.”


The original regulation was issued in 1997.

Prior to that time, the only acceptable designation for anything produced in the area west of Jordan, west of Syria, south of Lebanon and to the east and north east of Egypt was Israel, according to U.S. Customs. But after the Oslo Accords were signed, the State Department directed the Treasury Department to ban the label “made in Israel” for anything made in Judea and Samaria (the “West Bank”).

On Monday Cotton made clear his distaste for the recently re-issued administration’s directive which he said “plays right into the hands of those who are driving insidious efforts to boycott Israeli goods. While some say the directive merely ‎restates an old labeling rule originally drafted 20 years ago with no intention to stigmatize Israel, the truth is the rule was lightly if ever enforced and serves little purpose today.

“Its vigorous enforcement now — coming after a concerted lobbying campaign on the part of groups looking to weaken Israel — will have the undeniable effect of isolating our closest friend in the Middle East and giving other nations an excuse to unfairly treat Israel in trade relations.”

Cotton denounced the current global effort, in some quarters, to delegitimize Israel, calling those behind it, “too weak politically and too wrong morally to succeed in quick and dramatic fashion. They instead seek to achieve their aims gradually with incremental steps like labeling rules. It’s incumbent on all those who stand with Israel therefore to remain ever vigilant.”

That is why, Cotton said on Monday, he introduced the legislation to rescind the administration’s directive requiring the special labeling of Israeli goods produced in Judea and Samaria (“West Bank”) and Gaza Strip. 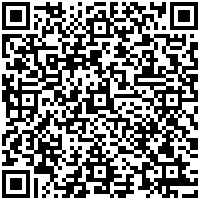