United Arab Emirates’ Senior Rabbi Dr. Eli Abadie led the ceremony on Tuesday to officially open the representative office of the Israel Diamond Exchange in the DMCC, the global hub for trade and enterprise in the UAE’s Free zone in Dubai.


The rabbi blessed those involved with making the office “very, very successful” and said with a smile, “There should be a lot, a lot of business between Israel and Dubai.”

In response, those present at the ceremony said, “Inshallah. Amen.”

The rabbi then recited the blessing on posting a mezuzah on the doorpost at the entrance to the new office before carefully pressing the silver-covered parchment scroll into place.

Last week the Association of Gulf Jewish Communities (AGJC), founded by Rabbi Abadie, celebrated the first anniversary of its establishment in the region.

Thank you to the government officials, Jewish leaders and our board members who have shared their reflections on the impact that the AGJC has had over the past year and what it means for the future of Jewish life in the region.

Wishing you all a #ShabbatShalom! pic.twitter.com/KsT9NqylWn

Earlier this month, the Shaare Mizrah Jewish community in Dubai celebrated the welcoming of a new Sefer Torah as well. 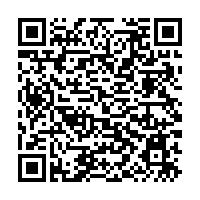