Israeli Justice Minister Tzipi Livni has been granted temporary “special mission” status by the British government to ensure she will not be faced with an arrest warrant in the UK for alleged war crimes in Gaza, according to The Guardian.

The former chief negotiator with the Palestinian Authority requires diplomatic immunity to protect her from arrest when she visits the country because she has been targeted before — as have other top Israeli officials. Several have had to actually turn around at Heathrow Airport and return to Israel, in fact.


A “special mission” is defined as a “temporary mission representing a state, which is sent by one state to another with the consent of the latter in order to carry out official engagements on behalf of the sending state,” Foreign Secretary William Hague told parliament members in March 2013.

The term was used to grant Livni the status once before, in October 2011, after she was targeted with an arrest warrant issued in December 2009 by the Westminster Magistrates Court. London attorneys Hickman and Rose had acted on behalf of a relative of a Palestinian Authority Arab who died on the first day of Israel’s counter-terror Operation Cast Lead against Gaza in December 2008. The operation was launched to silence the years-long incessant rocket fire and terror attacks aimed at southern Israeli families. At that time UK citizens could apply directly to a judge for an arrest warrant.

The “special mission” status provides only temporary protection, however, and will not protect Livni or anyone else from future arrests or prosecution for alleged breaches of international law.

The fact is, however, that Livni’s position as Israel’s Minister of Justice — a position in the cabinet and in the security cabinet — should by definition confer automatic diplomatic immunity.

Isn’t it odd that the justice minister of a sovereign democratic state, supported ostensibly by the most powerful nation in the world, now needs the British government to confer a “special mission status” to block its own legal system from sabotaging her visit?

But here’s the real irony.

Livni, for years the coddled daughter of the Israeli left, was the sole voice advocating for concessions on nearly every point. She led the opposition against the government of Prime Minister Binyamin Netanyahu until he co-opted her into the coalition as chief negotiator, where she tried to give away the house.

She promoted massive concessions and advocated for peace with the Palestinian Authority, which then left her politically out on a limb, betrayed by the very people she advocated for. PA Chairman Mahmoud Abbas, who spurned the talks last month, rejected all compromises by Israel – and suggestions by the United States – preferring instead to sign a unity deal with Hamas terrorists.

It goes beyond irony, its simply cannibalistic. 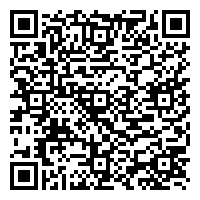