Yes, it’s now gotten to the point where the Muslim student president of the self-described “pro-Israel” J Street U is given the forum of the Jewish Telegraphic Agency to tell Jews to be better pro-Israel advocates by fighting Israel’s “Occupation.”

J Street U gave this University of Maryland student a megaphone which she’s using to attack Israel, and now she’s being given a “Jewish” media outlet to amplify her anti-Israel, pro-Palestinian Arab message.


Amna Farooqi, the J Street U president, seized upon another editorial from another leader of a Jewish organization brought to you by the JTA, David Bernstein of the Jewish Council on Public Affairs.

Bernstein, in turn, was warning Jewish Americans that in order to defeat the BDS (Boycott of, Divestment from and Sanctions against Israel) Movement, Jews should start developing partnerships with various social justice groups “on the mainstream left.”

Bernstein wrote that the BDS movement is teaming up with other “social justice” organizations to together fight against Israel, and so he urged pro-Israel folks to ape this coalition building and thereby fight this “intersectionality” of “other oppressed groups” making alliances with anti-Israel groups.

Farooqi suggests the coalition pro-Israel groups should join are those progressives who are attacking Israel for engaging in the “Occupation” of Palestinian Arab land. No joke.

She is serious when she writes that demonstrating a commitment to social injustice:

doesn’t just mean joining in battles against injustice here in the United States. Many progressive movements see Israel’s occupation as related to the same injustices they are fighting in their own communities. We must take their concerns seriously. Peacefully ending Israel’s occupation is a legitimate and important social justice issue — and the pro-Israel community should treat it as such.

Farooqi has been taught that she is an appropriate representative of a self-described Jewish pro-Israel group, despite her being a Muslim whose sole Israel agenda item is her firm commitment to defeating the so-called “Occupation.” LINK

Perhaps Farooqi is not aware that there are serious Jewish and other pro-Israel supporters who understand that there is no Occupation of a people, the Palestinian Arabs, who never had a claim to the land they now insist is theirs and which was acquired by Israel during a defensive war and at a time when there was no sovereign and had not been one since the end of the Ottoman Empire.

But no matter, Farooqi’s hubris is as outsized as that of the leadership of the parent organization J Street. She, like they, believe that progressives have a monopoly on social justice which is theirs to define.

Farooqi acknowledges that there are some from her team who have failed to “acknowledge” that there are “nuances” to the Arab-Israeli conflict. She finds that “frustrating.” And then she launches into an unqualified statement of fact, i.e. her own opinion: “no reasonable, honest person can deny that Palestinians deserve civil rights and self-determination, which they have been deprived of for almost 50 years.” She believes it, so it’s a fact.

Here is just a little more of her finger-wagging:

As long as the institutional pro-Israel community ignores the occupation and treats its effects on Palestinians and Israelis as insignificant or marginal, it will continue to alienate progressives. The pro-Israel community has to do more to oppose the occupation and advocate for a two-state solution that guarantees security, liberty and self-determination for Israelis and Palestinians if it wants to be part of progressive alliances.

Maybe the pro-Israel community prefers to be focused on asserting and protecting the “civil rights and self-determination,” let alone the security, of the Jewish State more than it cares to cater to the self-absorbed and inherently anti-Israel divisions of the “progressive alliances.” And really, does anyone in the pro-Israel world need to be lectured by Farooqi about security or liberty for Israel or Palestinian Arabs?

And what is to be made of the editorial running in the JTA, the source of virtually all non-local news for virtually every Federation-funded and other Jewish media outlet in the U.S.? 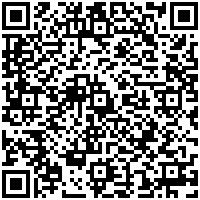