On November 29, 1947, by a vote of 33 for, 13 against, and 10 abstained, the UN General Assembly adopted Resolution 181(II) to partition Mandatory Palestine at the end of the British Mandate in 1948. The Plan was accepted by the Jewish Agency for Palestine, despite the fact that it turned Jerusalem into an international city, outside Jewish control, and carved out an enormous section in the center of the country for the future Arab state.

Arab leaders and governments, on the other hand, rejected the partition plan and declared their unwillingness to accept any form of territorial division.


A civil war, known to Jews as The War of Independence and to Arabs as The Catastrophe, broke out in Mandatory Palestine immediately following the adoption of the Resolution by the General Assembly. Then, at midnight on 14 May 1948, the British Mandate expired, and, a few hours earlier, the Jewish People’s Council approved a proclamation, declaring “the establishment of a Jewish state in Eretz Israel, to be known as the State of Israel.” The 1948 Arab–Israeli War began with an invasion of the fledgling country by the Arab States on May 15 1948. Hundreds of thousands of Arabs fled the country, never to return, eventually losing the entire area they could once declare their own.

Moshe Ma’oz, professor emeritus of Islamic and Middle Eastern Studies at the Hebrew University of Jerusalem, explains why the Arabs reject the 1947 partition plan. Noting that some moderate or pragmatic Arabs were prepared to accept a small Jewish state in part of Palestine.

“But the [Husseini family] – not democratically elected but backed by the Arab League – continued to intimidate its moderate brethren and to maintain its uncompromising position against the Jews. Even according to moderate Palestinian intellectuals, this leadership adopted an extreme policy vis-à-vis the idea of two states, thus grossly ignoring the will of the UN and the Great Powers, and leading the Palestinians into war and tragedy.”

“Indeed, this militant syndrome of the Palestinian leadership significantly contributed to preventing a political solution to the Arab-Jewish dispute over Palestine in 1947, as in 1937,” Ma’oz argues. “This syndrome was inspired by an intense Islamic and nationalist ideology, dominated by the Husseini family and in particular, Hajj Amin al Husseini, the charismatic Grand Mufti of Jerusalem and Head of the Supreme Muslim Council.”

“Denying the right of the Jewish-Zionist community to national self-determination even in part of Palestine, the Husseinis periodically used violence and terror against Jews, as well as against the moderate Palestinian Nashashibi faction that for many years cooperated with the Jewish community and acknowledged its national aspirations,” he reiterates, explaining that “this moderate faction, although supported by many families and notables throughout the country, was not as organized, armed, motivated or influential among the younger generation as the Husseinis. Consequently, the moderate/pragmatic Palestinians were unable to neutralize the powerful militant Palestinian nationalist leadership or induce it to accept a political settlement.”

One would think that on these commemorative events Arab participants would meditate on and recognize their mistakes of the past, and finally adopt a pragmatic, if not friendly approach to their dominant neighbor, the State of Israel.

Not really, to judge by the tone of Arab media’s observance of the November 29 anniversary. One example is an essay by Dr. Ramzy Baroud, “Symbolic ‘solidarity’ is moral defeat: A Palestinian view,” published on the occasion of November 29, 2016, in The New Arab.

“There was no moral or legal basis for that partition, as communicated in UN resolution 181 (II) into a ‘Jewish State’ and an ‘Arab State,'” Baroud writes, pointing out that “Jewish immigrants were granted over 55 percent of the total size of historic Palestine and the ‘Arab State,’ which never materialized, was accorded the rest.”

A quick glance at the map shows that more than half the Jewish portion was awarded in the arid Negev and Arava deserts down south, while the Arab portion was mostly contiguous and captured the bulk of central Mandatory Palestine.

Baroud’s recollection of history is understandably different from the Israeli view: “A few months after that unwarranted partition, well-trained Zionist militias moved from several fronts to ‘secure’ the borders of their promised state, only to take over half of what was designated for the future of the Palestinian state, leaving the indigenous Palestinian Arab population of that land with 22 percent of historic Palestine.”

There were no Arab gangs shooting at Jewish civilians in Baroudi’s narrative, nor is there the invasion by well armed Arab forces from three directions. In the same account, the Jews are “immigrants,” the Arabs “indigenous,” despite the fact that the vast majority of Arabs arrived from all across the Middle East in response to the economic renewal brought by European Jews.

Baroud spells it out: “By adopting a popular Palestinian narrative (not an official one), in which all Palestinians – Muslim or Christians, in Occupied Palestine or in “shattat” (diaspora) – are the center of the story, a better understanding of Palestine and its people can be established, and true solidarity can be offered.”

How should they unite around their national narrative? Simple, Baroud explains, “One major platform for their resistance, which strongly bonds Palestinians at home with those in shattat, is the Boycott, Divestment and Sanctions (BDS) movement, which pushes for accountability from those who make the Israeli domination over Palestine possible. It advocates for the Right of Return for Palestinian refugees, the end of occupation and equal rights for Palestinians who live in Israel.”

And so, according to him, “any solidarity that deviates from the current aspirations of Palestinians – as articulated by their fighting women and men, by their prisoners on hunger strikes, by their students fighting for the right to education, by these resilient, but often neglected voices – is not true solidarity.”

And so, in the best tradition of the French Royal House of Bourbon, the Arabs of the Land of Israel have forgotten nothing and learned nothing. 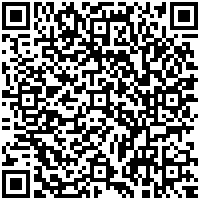