Monitoring group Regavim is objecting to comments made by State Department Spokesperson Elizabeth Trudeau on April 1 condemning Israel for demolishing an illegally-built EU school east of Jerusalem. Trudeau said that the demolitions “call into question the Israeli government’s commitment to a two-state solution.”

“The State Department condemned Israel for demolishing school structures that Israel’s courts have ruled were illegal. This was certainly an Israeli domestic issue regarding its own rule of law,” Regavim International Director Ari Briggs told Tazpit.

“We felt we needed to respond when a foreign power, who is supposedly Israel’s friend, weighs in on a domestic issue in a way it would never do with any other country in the world,” Briggs explained.

Briggs added that he sees no connection whatsoever between Israel’s occasional demolition of illegal structures built by the EU and Israel’s commitments to a two-state solution with the Palestinian Authority.

“I don’t see any connection between whatever commitment Israel makes on the political front to its enforcement of the law,” Briggs stressed. “We are talking about structures funded by foreign countries like the European Union being demolished after Israeli courts find them to be illegal.”

Moreover, Briggs pointed out mistaken references by the State Department to other demolitions not even related to illegal Palestinian structures in Judea and Samaria.

“Whenever they hear the word ‘demolition,’ they use their stock answer,” Briggs said, referring to an earlier condemnation of Israel’s demolition of illegal Bedouin structures in the Negev region by State Department Spokesperson John Kirby on March 4.

“The journalist who asked the question was talking about a demolition in the Negev and not in Judea and Samaria,” Briggs noted.

Briggs added that the State Department’s comments were made despite apparent EU violations of the Oslo Accords signed between Israel and the Palestinian Authority in the 1990s. The Oslo Accords, to which the EU was a signatory party, stated that changes and modifications to the status of territories and borders would only be made through negotiations and not through unilateral actions. 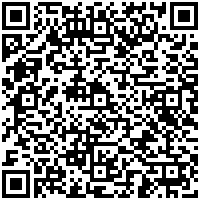