In the wake of his meeting this week with Egyptian President Abdel Fattah al-Sisi – who firmly supports the “two-state solution,” Prime Minister Naftali Bennett told Israeli media outlets on Tuesday night that he sees no point in meeting with Palestinian Authority leader Mahmoud Abbas to discuss a peace deal, or anything else.

The interviews were conducted in advance of the impending Yom Kippur holiday which begins Wednesday at sundown.


Bennet said it was “irrelevant” to meet with Abbas over how to reach a deal that would lead to the transformation of the Palestinian Authority into a new Palestinian country.

“I perceive it differently than the defense minister,” he told Ynet in an interview, “although we work in harmony.

“I oppose a Palestinian state and I think it would be a grave mistake to import the failed Gaza model of Hamas, which fires rockets at us, into the entire West Bank.”

Bennett said he has “three missions: one, stopping rocket fire. . .two, we can’t ignore their military buildup for the sake of peace – like has happened in Lebanon over the past 15 years, with Hezbollah building an arsenal of 150,000 rockets under Israel’s nose – and three is that I must care for our sons” – a referral to the bodies of two fallen IDF soldiers that were stolen by Hamas during the 2014 mini-war between Israel and the Iranian-backed terror group.

Bennett’s views, and his opposition to a two-state solution and refusal to meet with Abbas, however, has not stopped Defense Minister Benny Gantz from doing so.

Gantz met with Abbas in Ramallah on August 29, just a few hours after Bennett had returned from his meeting with US President Joe Biden and top administration officials in Washington DC, in talks that he said were approved by Bennett.

It was the highest-level direct talks between Israel and the Palestinian Authority since 2014, when US efforts to rejuvenate the moribund peace talks, failed.

Also at the meeting was the head of the IDF Civil Administration, the IDF Coordinator of Government Activities in the Territories (COGAT), Ghasan Alyan, senior PA official Hussein Al-Sheikh and PA Intelligence chief Majid Faraj. Gantz made sure to have his staff notify all of Israel’s political reporters as soon as he got back.

Biden was urging Bennett to try to develop a reconciliation with Abbas and improve the lives of Palestinian Authority Arabs.

Among the “good will gestures” agreed upon in Ramallah was the registration of thousands of Palestinian Authority businesses for digital VAT payments, according to Al-Monitor, a strategy that also sees the State of Israel agreeing to advance a NIS 500,000 ($150 million) loan to the PA. In addition, Gantz and Abbas agreed on expanding Israeli work permits for 16,000 more Palestinian Authority Arabs, increased approval for Palestinian Authority construction projects in Area C – the parts of Judea and Samaria under complete Israeli control under the Oslo Accords – and discussed ways to regulate the status of thousands of PA citizens who currently have no documentation.

The concessions by Gantz were slammed by Israel’s right-wing coalition partners and hailed by the left. They may also be the prelude to a more intensive effort by the Biden administration to “help” the two sides – US officials said Biden wants to focus on building confidence between Israel and the PA – before efforts are made to pressure both into returning to “serious talks” on a final status agreement.

It is interesting but not surprising to note that a Hamas spokesperson also slammed the talks, calling the meeting “a stab in the back of the Palestinian people” and a “betrayal of the blood of the martyrs.”

Reporters wondered at the time if Gantz’s meeting had any connection to the talks at the White House between Bennett and Biden that same weekend.

“Neither we nor the Palestinians are going anywhere tomorrow morning,” Gantz told military correspondents the next day in a briefing. “Steps must be taken to build trust between Israelis and Palestinians,” he said.

“The stronger the Palestinian Authority is, the weaker Hamas will be. The greater its ability to govern, the more security we’ll have and the less we’ll have to do.”

The two sides agreed to remain in touch.

“There is no diplomatic process with the Palestinians, nor will there be one,” an anonymous source close to Bennett subsequently told reporters, adding that Gantz’s meeting with Abbas was intended to address all the housekeeping issues affecting the dealing between the Israeli defense establishment and the Ramallah government.

The day after Gantz’s briefing with reporters, Bennett said in remarks to Israel’s Security Cabinet, “I am the only prime minister in three decades who told the president of the United States I am not going to hold peace talks with the Palestinians. But I told Biden I am serious in my intentions to improve the Palestinian economy and Palestinian lives.”

He told reporters Tuesday that he sees “no logic” in meeting with Abbas “when he’s suing our soldiers in the Hague and accuses our commanders of war crimes. In my opinion, the Palestinian Authority is a failed entity.” 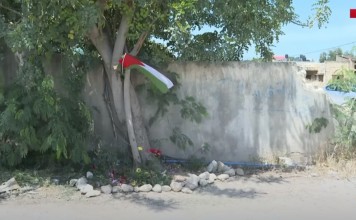