The IDF announced Saturday night that Israeli Air Force planes had attacked terrorist targets in a military compound belonging to the Hamas terrorist organization in the southern Gaza Strip. The attack was carried out in response to an Arab crossing of the border fence and an attempt to damage security infrastructure inside Israeli territory carried out earlier on Saturday, as well as repeated attempts to damage security infrastructures during violent disturbances led by Hamas.

“The IDF views with great severity the continuation of the daily attempts of the terrorist organization Hamas to strike at security infrastructures inside Israeli territory,” the IDF spokesman said. “We will continue to carry out our defense missions and ensure the security of the citizens of Israel.”

According to Ma’an, Israeli aircraft bombed several targets in the southern Gaza Strip town of Rafah and a site west of Khan Younis on Saturday evening. The F-16 warplanes fired three missiles at the sites, which caught fire. The warplanes also shot two rockets the site of the Qassam Martyrs northwest of the city of Rafah. No injuries were reported. The blasts were heard a great distance from the attacked locations.

Arab media posted a video showing young boys trying to break through the border fence under Israeli army bullets. According to the IDF, on Saturday morning, four terrorists infiltrated into Israel and stayed there for about a minute, fleeing back into the Gaza Strip after an IDF force fired at them. At first it was reported that the four suspects had set a tire on fire in Israeli territory, but the IDF Spokesperson’s Office later reported that they had thrown a Molotov cocktail.

An IDF force arrived at the scene and fired at the suspects who fled the scene.

During their one-minute stay in Israel, the terrorists managed to build a tent with the slogan: “The march of return, returning to the lands of Palestine.”

The intrusion took place a few hours after an explosive charge had been thrown at an IDF force in the northern Gaza Strip by terrorists who had gathered by the security fence. In addition, during the demonstrations at the fence Saturday – with a crowd of about 5,000 rioters – there were attempts to sabotage security infrastructures, according to the IDF Spokesperson. 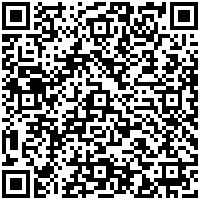