President Reuven Rivlin spent some time Tuesday comparing notes and sharing his experiences as a youngster under fire with some of the members of the Otef.gaza Instagram page who themselves live under fire today and who came to visit the president at his official residence in Jerusalem. The girls are residents of Israeli communities along the Gaza border.

The Otef.gaza Instagram page opened two weeks ago to give expression to the teens’ lives as residents of the area, and has already attracted 61,100 followers. Those who came to the President’s Residence — May Caspi, Meshi Elmakays, Yam Yefet, Shani Peretz, Lee Cohen and Kim Ovitz — are administrators of the page. The girls were given a tour of the President’s Residence by the visitors’ center that recently opened to the public, and then met with the president for a conversation.


Meshi Elmakays from the community of Kerem Shalom said, “We opened the page after we went on a hike, and we heard that big changes start with little steps. We thought we would have 100 followers and that that would be amazing.”

The president welcomed the girls to Jerusalem, expressing his joy in meeting “the wonderful girls of the Israeli communities around Gaza.” Rivlin told the girls, “You show the world what we have to deal with, and at the same time show that there is someone to take care of us and that we know how to stand tall.

“Every one of my grandchildren follows you constantly, and that’s really great.”

The president also told the girls about his own childhood in Jerusalem — which, sadly, was not very different from their own. “I also grew up under fire,” he related. “I was a kid when Jerusalem was under siege, when the Etzion Bloc fell, when Jordanian shells were fired on us and we asked why things like this were happening. At the same time, we understood that our big brothers and our parents were fighting and we knew that they would make sure that we would get to the situation where we could secure our independence.

“I understand that it is hard, very hard, to hear the Code Red alert,” said the president, “and that it’s very hard to know that you are going to school but don’t know if the alarm will go off on the way there, or that a shell or a mortar will fall. I understand you and we are all with you in these difficulties and know that you are the ones who ensure that normal daily life can continue in Israel because of your resilience.”

The girls brought one of the terror kites sent from Gaza to the Israeli communities in the area, and the president said, “These kites are supposed to be the dream of every child, playing with them in the breeze. Under Hamas, these toys have become weapons of war. I so hope that weapons go back to being toys soon.” 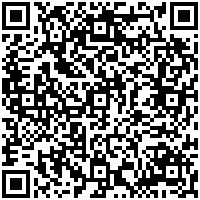