Former Hamas politburo chief Khaled Meshaal has called on the citizens of the Palestinian Authority to join those of Gaza in ramping up violence into a full-blown guerrilla war against Israel.


Speaking on a program aired on Al Jazeera’s television network December 2, Meshaal said in remarks translated by the Middle East Media Research Institute (MEMRI) that according to the Quran, “Jihad, resistance and self-defense [are] the essence of life.

“The abandonment of jihad leads to humiliation and death. Hence, resistance is the pinnacle of life. A person who lives under occupation, and who does not resist, is in fact dead,” he said, urging viewers to prepare for ongoing “resistance.”

There is a growing belief among Israelis that the fiscal support being given to Gaza by Qatar — agreed to by Israel after long discussions together with envoys from the United States, United Nations and Egypt — has a part in facilitating and perhaps even encouraging the current escalation in violence, if not re-igniting it.

Gaza received its first assistance in the form of diesel fuel paid for by Qatar, and delivered to the region in trucks that arrived via the Erez crossing from Israel. U.S. Special Representative for International Negotiations Jason Greenblatt thanked Qatari officials for their prompt assistance, and shortly after, clearly refreshed, Hamas renewed its violence at the Gaza border.

Israel quickly slowed such deliveries to a crawl, with then-Defense Minister Avigdor Liberman warning Gaza that further deliveries would be contingent on calm at the border and beyond.

The following month, in November 2018, the Qataris began to deliver cash to the enclave in order to begin paying the salaries of Hamas civil service workers in Gaza. The move, as before, was approved by Israel in order to minimize the humanitarian crisis in the enclave, caused by the theft of prior resource by Hamas for its military infrastructure. This time, Qatar recorded the names and fingerprints of every recipient.

Nevertheless, once again violence followed, with Gazans showing their thanks by hurling rocks and bombs at IDF soldiers who were guarding the Israeli border, while Hamas terrorists attempted to use the violence as cover for attempts to infiltrate and carry out more serious terror attacks. One succeeded and reached a Jewish community where he torched a greenhouse before he was caught by security personnel.

More strangely, Gazans even hurled rocks at the convoy in which the Qatari envoy was traveling as he toured the area — the same Qatari envoy who had just delivered $15 million cash in three suitcases to the Hamas government in Gaza City.

Yet Qatari envoy Mohammed El-Amadi delivered the second of the six promised monthly payments on time this month, $15 million in cash, on December 6.

One-third of that money went to civil service salaries, one-third went for unemployed Gazans and the remaining third went for relief and humanitarian aid support.

That was 10 days ago; 24 hours later, as usual, thousands of Gazans gathered at the border with Israel for the usual riots but this time, stoning attacks on the roads of Judea and Samaria shared the headlines — followed by the blockbuster revelation of Hezbollah cross-border attack tunnels penetrating northern Israel.

“When did Israel withdraw from southern Lebanon?” said Meshaal this month, barely two days earlier. “It wasn’t a result of negotiations; not in Madrid and not in Washington. It retreated as a result of resistance.

“When did it retreat from Gaza? After the [Second] Intifada in 2000 and the heroic resistance. Today we are being called and preparing to force Israel to retreat from Jerusalem and from the West Bank. Allah willing, this is on the way to its retreat from all of Palestine,” he claimed.

“The West Bank spans over 5,600 square kilometers and has mountains and valleys. I’m from there — I know the landscape,” he said. “It has everything necessary for guerrilla warfare.

“Why are we not preparing for that?” 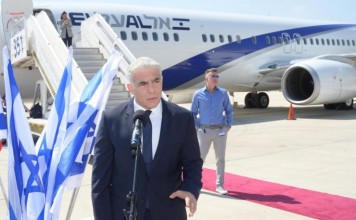