In a review before the Foreign Affairs and Defense Committee, Shin Bet Director Nadav Argaman said “there’s relative quiet, but it is deceptive.” Argaman revealed that in the past year his organization had foiled 480 attacks, arresting 219 Hamas squads and 590 lone terrorists in Judea and Samaria.

“The Palestinian sector has been very unstable in the past year,” Argaman told the committee members. “In the Gaza Strip we are between a potential campaign provider or ahead of a campaign on the one hand, and on the other, we attempt to stabilize the humanitarian situation of the residents of the Gaza Strip.”

The reality of the situation in Judea and Samaria is very complex, the Shin Bet chief said, noting that while the surface is relatively quiet, “it must be said that this quiet is deceiving and beneath the surface the area is bubbling a great deal. Hamas is trying with all its might to carry out terrorist attacks in Judea and Samaria, directed from the Gaza Strip, Turkey and Lebanon.”

Argaman said that over the past year the scope of thwarting the attacks had been large: “This is a scope that can only indicate the extent of terrorism that is taking place under the surface,” he said. “Fortunately, a large part of the attacks do not succeed.”

He also mentioned that his service had “succeeded in thwarting cyber attacks – both terrorism and espionage against the State of Israel. These successes, considering the potential reality in Judea and Samaria, are the result of the very strenuous activity of the entire Israeli security establishment – the Shin Bet, the IDF, the Israel Police – which enables this reality and allows the citizens of Israel to continue their daily routines.”

Last week, political analyst Dana Weiss reported that Argaman had been sent to meet Palestinian Authority Chairman Mahmoud Abbas and other senior figures in the Palestinian Authority, to presented to them a series of significant economic projects Israel would support. Argaman suggested, among other things, the establishment of a joint industrial zone, and a partnership in the Gaza gas project, both of which would boost the PA’s economy.

Abbas was not impressed by the proposals and refused to consider either one. 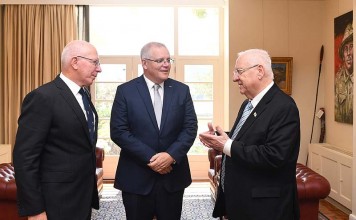