The government requested yet another postponement of the hearing, on Monday, in which it is to explain why the Palestinian Authority’s (PA) flagship illegal outpost, Khan al Ahmar, has not yet been evacuated.

A September 2018 High Court of Justice decision gave the government the green light to evacuate the illegal structures built on state land within the municipal boundaries of the Jewish community of Kfar Adumim, south of Jerusalem.


The ruling, handed down in response to Regavim’s fifth petition against the illegal outpost, was the most recent in a string of petitions dating back to 2009, when Regavim first launched its legal battle to halt the PA’s land-grab in the E1 area.

The High Court rejected Regavim’s petition on the basis of the government’s declaration that it would be evacuating the illegal outpost “in the near future.”

In October 2018, only a short time before the court’s ruling, Prime Minister Netanyahu announced, in his opening remarks before a working-meeting of government, that “Khan al Ahmar will be evacuated, either consensually or non-consensually. It will not take many weeks; it will take much less than that.”

Months later, when the situation remained unchanged, Regavim once again petitioned the High Court – for the sixth time, requesting an order that would require the government to explain its failure to enforce the law and to carry out the High Court ruling within a stipulated timeframe.

The government was to have responded to this petition on the eve of the second round of national elections in 2019, and argued that the transitional government then in power was a caretaker government and that the state’s response should be submitted only after a government was seated. The extended political crisis prompted the High Court to allow an additional postponement.

Last week, the government once again requested a short extension, asking that it be allowed to submit its response by Monday, but on Monday, once again, the state’s representatives requested that the court postpone the hearing for another six months, pointing out that the current government was formed only four months ago. In its deposition, signed by Meir Ben Shabbat, Director of Israel’s National Security Council, the state explained that the new government was sworn in during a period of “unprecedented complexity and sensitivity, without parallel in our national history.”

“The new government began its tenure against the backdrop of a national effort to contend with the spread of the Coronavirus and the far-reaching ramifications of this effort for government resources that have been devoted entirely to this important national objective. Keeping in mind the particular constellation of Israel’s security and political situation, the respondents (the government) require additional time to enable our elected political leadership to fully examine the subject of this petition,” he claimed.

Supreme Court Justice Noam Solberg rejected Netanyahu’s request for an additional six-month continuance to submit a response in the Khan al Ahmar case, and treated the government to some particularly sharp criticism.

In his ruling, Solberg wrote that “the request to postpone this hearing is an embarrassment.”

Solberg noted that even after the High Court’s decision, “two years later – there is nothing new under the sun. Despite the fact that the state’s representatives have argued before this Court in the past that the execution of judgments, in this case, are a pressing, even urgent, matter, and despite the fact that this Court has allowed the state latitude, time and time again, in carrying out its decisions, nothing has changed: What was is what will be, and what has been done continues to be done.”

“The state maintains its prerogative to exercise its own judgment regarding priorities and policy formulation; precisely, for this reason, it must honor its own pronouncements and enable others to take these pronouncements seriously, and not render them null or vacant promises,” he added.

Solberg rejected the request for a continuance, explaining that “under the circumstances, and given the current time constraints” the hearing will take place in two months. The state is required to file its response to the petition by November 1.

The Regavim Movement stated it strongly objects to further postponement of the hearing.

“This petition was submitted half a year ago, and in the time that has passed, no progress whatsoever has been made to conduct any such examination,” said Attorneys Avi Segal and Yael Cinnamon. “It’s become standard practice – every time the deadline for submitting a response arrives, the government submits a request for a continuance based on any number of strange and convoluted excuses: transitional governments are unauthorized to respond to the petition, delays caused by the government’s preoccupation with the corona pandemic, and now – the government, sworn in over four months ago, has not yet had the opportunity to deal with the issue.”

“The Khan al Ahmar case long ago ceased to be an isolated case of a single illegal outpost. It has been an exemplar case of the way the state acts – or more precisely, how it fails to act – when faced with Palestinian Authority’s takeover of Area C,” adds Regavim’s spokesperson. “The government has violated its own commitment, reflected in the High Court of Justice’s ruling many long months ago. The time has come to put a stop to this inexcusable conduct. We call upon the High Court to issue a final judgment in this case, requiring the government to raze this illegal outpost immediately and to pay the court fees incurred by its interminable and inexcusable procrastination.” 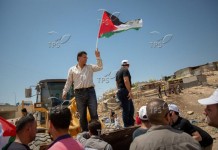 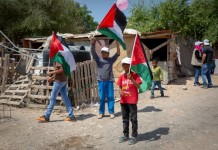