The U.S. Supreme Court on Monday declined to hear an appeal regarding a lawsuit brought forth by American victims of Palestinian Authority / PLO terrorism.

The case, Sokolow v. Palestine Liberation Organization, contended that the PLO and Palestinian Authority were responsible for more than seven terror incidents from 2001 to 2004 that led to American deaths, claiming that the attacks were carried out by security officers and other agents of the P.A. The American families invoked the 1992 Anti-Terrorism Act, which allows U.S. nationals to sue international terror groups for damages in U.S. federal district courts.

In 2015, a federal jury found the PLO and P.A. responsible for perpetrating and materially supporting acts of international terrorism against U.S. citizens, awarding the families $218.5 in damages, which tripled to $655.5 million as required by the Anti-Terrorism Act. However, the Second Circuit Court of Appeals in New York later threw the case out, ruling that the victims needed to show they were specifically targeted or that the attackers intended to harm U.S. interests. Additionally, it ruled that the Palestinian entities did not have sufficient connection to the United States that would subject them to federal law.

As such, the victims petitioned for a writ of certiorari, asking the U.S. Supreme Court to review the Second Circuit’s judgement. The Supreme Court asked the Solicitor General—held by Noel Francisco, an appointee of the Trump administration—to express his views regarding the victims’ petition.

In March, the U.S. Solicitor General, representing the views of the Trump administration, supported the ruling by the appeals court, saying that while it “sympathizes deeply with the American families,” the lawsuit “was not consistent with due process under the Constitution, and its decision does not meet the usual standards for Supreme Court review.”

The Supreme Court agreed on Monday. Without issuing a comment, they declined to hear the case, thereby leaving the lower court ruling standing.

“The Supreme Court’s decision is a huge disappointment and a terrible outcome for victims of international terrorism,” Susan Tuchman, director of the Center for Law and Justice at the Zionist Organization of America, told JNS. “When Congress passed the Anti-Terrorism Act in 1992, victims of international terrorism were finally afforded a legal right and remedy against terrorist perpetrators. Now that the Supreme Court has declined to review the lower court’s decision, terror victims will have a difficult, if not impossible, time satisfying the jurisdictional requirements the lower court imposed.”

Tuchman also criticized the Trump administration’s decision on the case.

Stephen Flatow, a leader of the American Victims of Palestinian Terrorism organization, told JNS that he is “very disappointed in the decision of the Supreme Court.”

“I had hoped the court would have seen through the shallowness of the Appeals Court decision that reversed the original verdict in favor of the plaintiffs,” he said.

Flatow, a New Jersey attorney who lost his daughter, Alisa, to an Iranian-sponsored (Palestinian) Islamic Jihad terrorist attack in 1995, said that “American victims of Palestinian terror have now been frozen out of the U.S. legal system—the same one that gives them rights to pursue terror groups, and those who incite and sponsor them.”

“All I can say to the victims and their families is you gave it the good fight,” he added. “It’s small comfort, I know, but you did your best for yourselves and your loved ones.”

Shin Bet Chief to Cabinet: Suppress Hamas Growth or You’ll Have another Hezbollah on your Hands 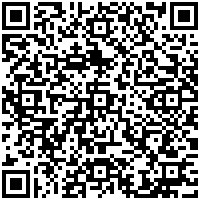