David Saada, who was placed in the 11th spot on the Shas slate for the 21st Knesset, on Thursday informed party chairman Aryeh Deri that he was removing his name from the list, due to the requirement that a Knesset member must give up his or her foreign citizenship, which Saada is currently not prepared to do.

Saada issued a statement saying he was very grateful to Rabbi Aryeh Deri for the faith he had placed in him by awarding him a realistic spot on the Shas list, a move that was appreciated by the entire French constituency in Israel, as it showed how serious Shas is bout promoting immigrants from France.


“After it became clear that in order to enter the Knesset I would have to give up my French citizenship, something that can not be done at this time, I asked the Council of Sages to remove my name from the list,” Saada said.

“I and all my friends will work for the Shas movement with all our power, for the sake of the entire French sector in Israel,” he said. 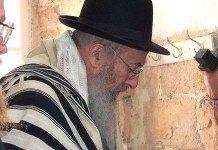