Ivan Lewis is believed to be the first MP to wear a yarmulke in Parliament.

The Bury South MP donned it last week when he accused Labour leader Jeremy Corbyn of turning the party into “the party of institutionalized anti-Semitism.” He added: “So much so that a majority of Jews in [England] feel they would not be safe in the event of [Corbyn] becoming prime minister.”


In his sermon on Shabbat, Rabbi Yossi Chazan of Manchester’ Holy Law Hebrew Congregation, where Lewis is a regular attendee, said he was uplifted to see the MP wearing a yarmulke in the chamber.

The executive of Manchester’s Whitefield Hebrew Congregation plans to lay off its rabbi, Jonathan Guttentag, and Chazzan Joseph Muller at a special general meeting on Thursday.

The issue is splitting the congregation. The saga began seven years ago when an attempt was made to sack the rabbi, who was accused of neglecting communal duties to organize a Big Tent Israel advocacy conference. The rabbi’s supporters at the time outvoted backers of the move, leading to the resignation of the shul president and four executive members.

The current executive claims the reason for dismissing their rabbi and chazzan is financial. The age and religious conservatism of the rabbi and chazzan are also apparently key factors. Some believe the rabbi is not religiously progressive enough for them, particularly on women’s issues.

An emergency meeting, called by the rabbis’ supporters, took place on Monday.

The Whitefield Community Kollel, which the rabbi established, has protested the proposed moves, stating that Rabbi Guttentag is “the source of energy and spiritual direction for the Whitefield community.” They claim many shul members benefit from the community kollel through one-to-one learning sessions and other communal interactions.

If Rabbi Guttentag is let go, he is threatening to sue the shul for religious and age discrimination and breach of contract.

London anti-war campaigner Rabbi Hershel Gluck of Stamford Hill has explained to The Jewish Press his attitude to war after appearing at a protest of an international arms fair earlier this month.

The Jewish Press reported at the time that the rabbi had refused to answer a question about his anti-war advocacy. But it now transpires that we had mistakenly phoned another man of the same name.

Rabbi Gluck has now told The Jewish Press, “Whilst at times war is imperative and justified, as in defending ourselves from Hitler and the Nazis during the Second World War, it is never idealized in Judaism. The spilling of blood is seen at times as a horrific necessity.

Leader of the House of Commons Jacob Rees-Mogg is being criticized for sharing a video of Alice Weidel, co-leader of the Alternative for Germany party. The video was about Brexit and the EU.

The AfD has been accused by the Central Council of Jews in Germany of “supporting anti-Jewish hate and Holocaust relativizing or even denial.”

A Board of Deputies spokesperson said: “Jacob Rees-Mogg was wrong to re-tweet a video promoting a German far-right party. We share the disquiet of the German Jewish community which has described the AfD as ‘a danger to Jewish life in Germany.’”

Rees-Mogg said, “I don’t think re-tweeting is an endorsement of things that other people stand for.”

A government review into incitement and anti-Semitism has been delayed. The review by the Department for International Development (DFID) was announced six months ago and was due to be completed this month.

However, work on the review has only just begun because of contractual disputes with the reviewing institute as well as a change in the Palestinian Authority Education Minister. The review is now set for completion in 2020.

A DFID spokesman said the UK was “deeply concerned about allegations relating to the Palestinian Authority’s new curriculum. Anti-Semitism, violence and hate have no place in our society.”

– Last week’s Trade Union Congress overwhelmingly passed a motion calling for an extensive boycott of Israel. The motion called on the TUC to “prioritize Palestinians’ rights to justice and equality, including applying principles based on international law to all UK trade with Israel.”

– Sara Conway, Jewish Labour candidate for the London Jewish area of Finchley and Golders Green, has stood down after recently causing controversy for saying anti-Semitism is being “weaponized.” Conway said she was standing down “due to personal matters.”

– New government Communities Secretary Robert Jenrick has vowed to take action against universities and parts of local government that have been “corrupted” by anti-Semitism.

The MP, whose wife is Jewish, said: “I never thought I’d have to explain to my three daughters…that anti-Semitism is on the rise in our country, that I would walk them to synagogue past parents providing protection in stab proof vests.” 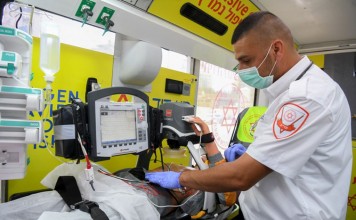