Despite Friday’s ceasefire between Israel and Hamas, the level of politically-motivated anti-Semitism in the UK, triggered by the fighting in Israel, has continued to rise.

On Friday morning, in the busy Jewish shopping area of London’s Golders Green, a man was arrested after trying to break the window of a Jewish-driven car displaying an Israeli flag.


Members of Shomrim and the Community Security Trust, as well as members of the public, detained the suspect by sitting on his feet until police arrived and arrested him outside the shop Kosher Kingdom.

Meanwhile, on Shabbat afternoon, verbal abuse was hurled against local residents in the Jewish area of Salford. A woman who had been sitting in her daughter’s garden told The Jewish Press, “It was very disturbing. There was screaming and I heard the word `Nazi.’”

Police have increased visible patrols in Jewish areas of London and Manchester.

On Shabbat, a pro-Palestinian rally attended by an estimated 180,000 people took place at London Trafalgar Square. Among the speakers were former Labour leader Jeremy Corbyn and former Labour Chancellor John McDonnell, who declared Israel an “apartheid state” and vowed to continue to campaign for Israeli boycotts.

Some banners at the rally called Israeli actions against the Palestinians “Holocaust Part 2” and deemed Israel “the new Nazi state.”

Israel Embassy spokesman Ohad Zemet said, “The same jihadi ideology we see from Hamas in Gaza is something we are recently seeing in the streets of London.”

Jewish Labour MP Dame Margaret Hodge said, “It’s desperately depressing that what is an international conflict has morphed into national hate and racism in the UK.”

Israeli Ambassador Tzipi Livni, newly re-elected Board of Deputies Marie van der Zyl, as well as senior politicians from both the Conservative and Labour parties were among the speakers at a pro-Israel rally in London on Sunday attended by 1,500.

Police prevented some 40 Palestinian supporters, who were hurling abuse and throwing objects at the police, from disrupting the rally. However, the Campaign Against Anti-Semitism (CAA) is filing a complaint to the Directorate of Professional Standards after police appeared to ignore at least one counter-demonstrator who shouted, “We’ll find some Jews there” and “We want their blood.”

A spokesperson for the CAA said, “These threats are criminal and the police should know better than merely to escort the perpetrators away from a Jewish crowd; they should be arresting them.”

The spokesperson continued, “Over the past two weeks, on too many occasions, the Metropolitan Police has failed to intervene against anti-Semitic crime and incitement on the streets of London and in some cases officers have even joined protestors, despite rules prohibiting such participation.”

CAA analysis of Home Office figures show that Jews are four times more likely than other faith groups to be the targets of hate crimes. 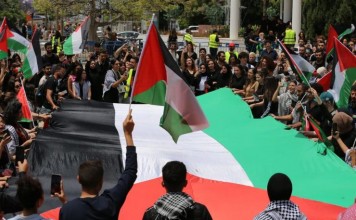 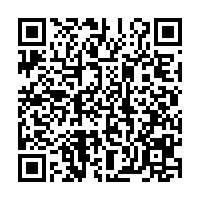